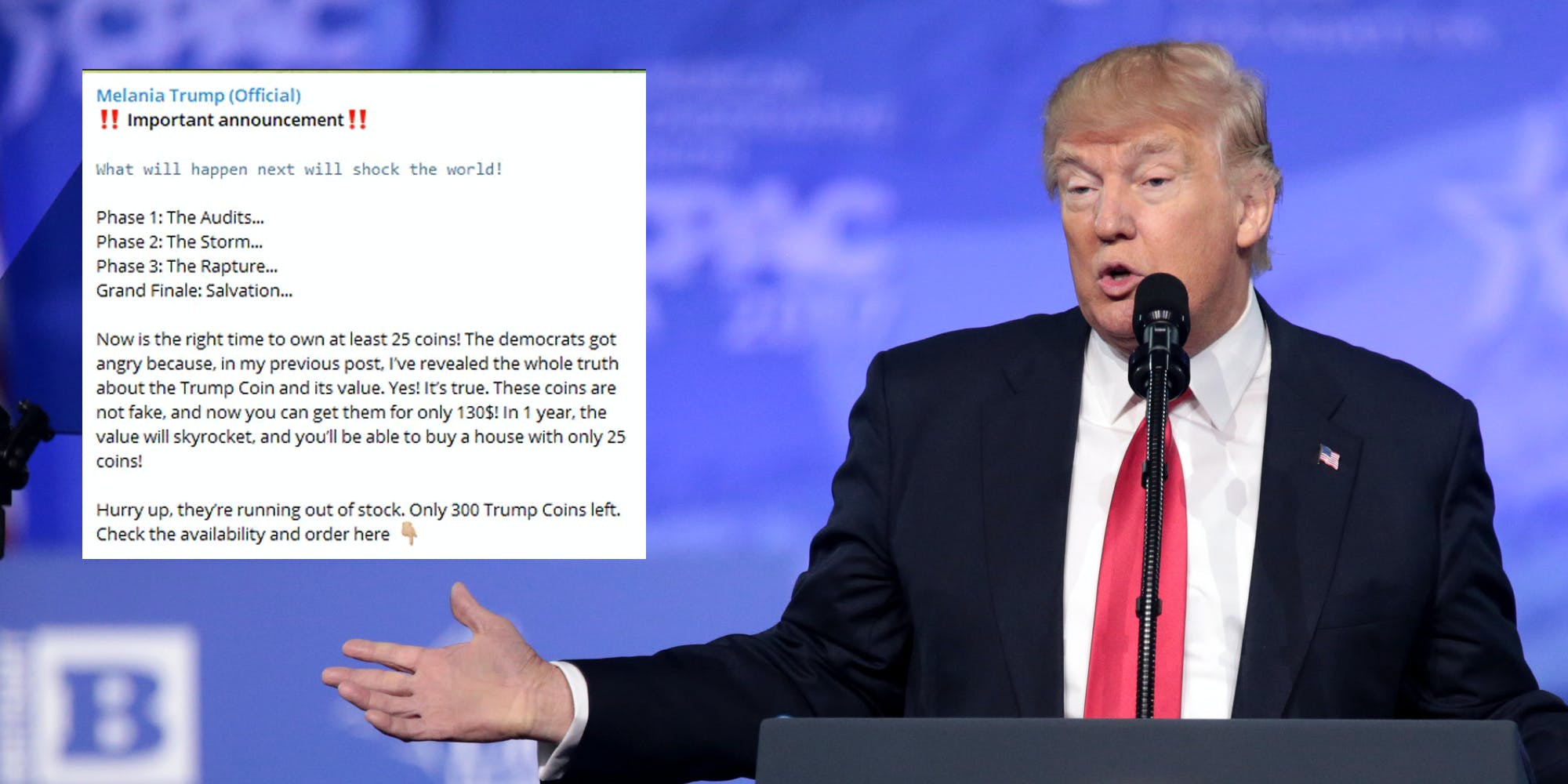 The results of the Arizona election audit are in, and it’s (still) official: President Joe Biden won, and supporters of former President Donald Trump are struggling to process the news. Some are in denial, others are disappointed, and a few have seized the moment as an opportunity to make a buck.

After Biden narrowly carried the swing state in last year’s election, Trump and his ardent supporters baselessly claimed that there was widespread election fraud. They were particularly fixated on Maricopa County, where Biden won by 45,000 votes.

Although the county conducted two post-election audits that confirmed its results, Arizona Senate Republicans subsequently ordered a third. They selected Cyber Ninjas, a little-known Florida company, to conduct it.

The audit was immediately behest with controversy.

Cyber Ninjas is led by a man who had previously spread unfounded election conspiracy theories. His company had no known experience auditing elections.

Reports emerged of auditors’ bizarre and laughable methods, such as using black lights for an unknown purpose, searching for kinematic artifacts for a similar reason, and questioning whether “Cheeto finger” on a ballot was evidence of fraud. They also hunted for bamboo fibers based on a debunked conspiracy that fake ballots were shipped from South Korea.

In spite of all this, according to a draft report reviewed by multiple outlets, the audit ultimately concluded that Biden indeed won.

Maricopa County trumpeted the news on its verified Twitter account—but not without criticizing the report’s “errors & faulty conclusions about how Maricopa County conducted the 2020 General Election.”

“Regardless of what ends up in the final report, what Cyber Ninjas & co. conducted was not a good audit. It did not build trust,” Maricopa County tweeted on Friday.

Now Trump supporters are freaking out. Many, including Trump himself, simply refuse to believe the audit’s result.

We love the smell of panic in the morning- #ArizonaElectionAudit pic.twitter.com/PtQuPGCZ90

“So does this decertify the entire election or only AZ?” a user named Barbie wondered.

One called John Lamb said, “I need more popcorn. Today is gonna be the beginning of their end.”

In the US Audit Watch Chat Telegram, someone who goes by Stephen Sea chillingly warned, “Complicit MSM ‘personalities’ will HANG in their OWN ‘court’ (of public opinion).”

“BEFORE they are executed in the United States Court of Military Justice.”

One of the most unexpected responses to the audit came from the “Melania Trump (Official)” Telegram account. The account, which is clearly not affiliated with the real Melania Trump, seized the moment to sell Trump coins.

“Now is the right time to own at least 25 coins!” the “Melania Trump (Official)” account declared on Friday afternoon. “…These coins are not fake, and now you can get them for only 130$! In 1 year, the value will skyrocket, and you’ll be able to buy a house with only 25 coins!” 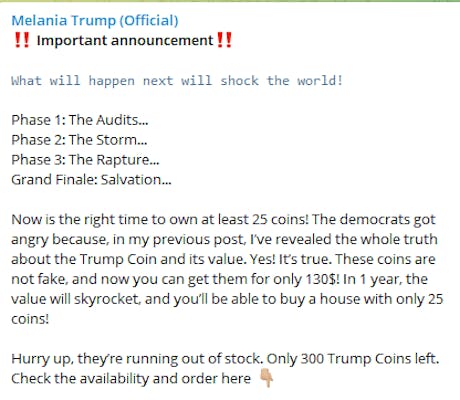 The post directs people to a website whose url ends in “QAnon.” The site offers one free coin (plus $8.95 for shipping and handling) or the purchase of multiple coins at prices ranging from $7.95 apiece for three coins to $4.95 apiece for 25 coins. The site promises the coins are “made to impress” and will maintain “‘proof-like’ quality” inside a “complementary plastic case.”

“This coin is a symbol of President Trump’s victory and success,” the site says.

The gold and silver plated coins bear Trump’s likeness and the presidential seal on opposite sides, his 2020 campaign slogan “Keep America Great,” and are dated 2020.

If the site’s predictions about the coins’ value were true—to be clear, they are not—that means people could buy a house for roughly $125 a year from now.