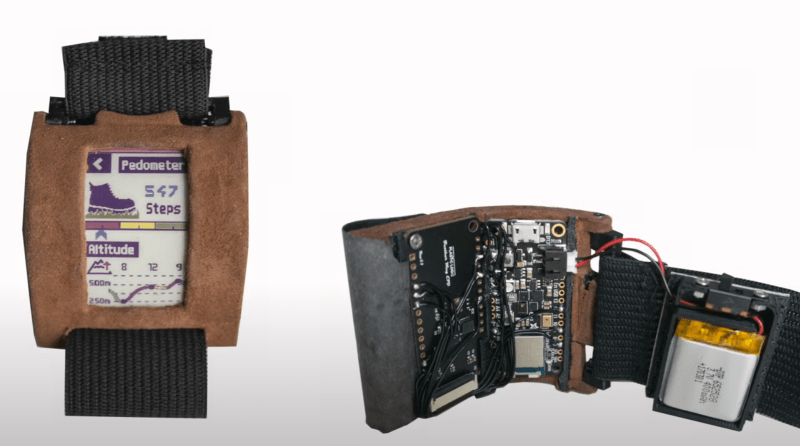 The Interactive Media Lab at Dresden Technical University has been busy working on ideas for user interfaces with wearable electronics, and presents a nice project, that any of us could reproduce, to create your very own wearable colour epaper display device. They even figured out a tidy way to add touch input as well. By sticking three linear resistive touch strips, which are effectively touch potentiometers, to a backing sheet and placing the latter directly behind the Plastic Logic Legio 2.1″ flexible electrophoretic display (EPD), a rudimentary touch interface was created. It does look like it needs a fair bit of force to be applied to the display, to be detectable at the touch strips, but it should be able to take it.

The rest of the hardware is standard fayre, using an off-the-shelf board to drive the EPD, and an Adafruit Feather nRF52840 Sense board for the application and Bluetooth functionality. The casing is 3D printed (naturally) and everything can be built from items many of us have lying around. The video below shows a few possible applications, including interestingly using the display as part of the strap for another wearable. Here is also is a report on adding interactive displays to smart watches. After all, you can’t have too many displays.

Many wearables projects can be found in the HaD archives, including this dubious wearable scope, a method for weaving OLED fibres into garments. Finally, for a good introduction to wearable DIY tech, you could do worse than this Supercon talk from Sophy Wong.