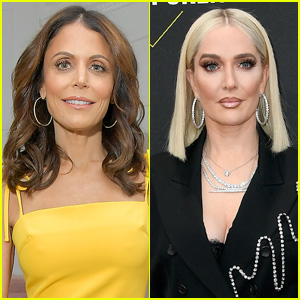 Bethenny Frankel is clearing the air.

Bethenny clarified her comments in an upcoming episode of her podcast Just B With Bethenny Frankel, per UsWeekly.

“I don’t quote-unquote know Erika Jayne,” she said in the clip. “I’ve met her and we’ve done this sort of Instagram thing and she was at my house doing the crossover Housewives episode. I have no idea if she knew [about Tom’s actions]. I know nothing about their marriage, nothing about their life… We’re not all experts on someone else’s lives.”

She added that she can’t speak to the specifics on the ongoing case. Erika filed for divorce from Tom in November 2020 after 20 years of marriage. A month later, Erika and the 82-year-old lawyer were sued for allegedly faking their divorce to embezzle money that was intended for Tom‘s clients, who lost loved ones in the 2018 Boeing plane crash.

“I knew that I knew,” Bethenny continued. “I knew that I told people. This is about, like, some people you know, you know that their husbands are cheating on them… and maybe the spouses don’t know. Or maybe they don’t want to know.”

She went on to say “we cannot know about things that we don’t know about” and that she finds it “alarming” to see so many people “piling on” the RHOBH star as the season continues.

“People are saying that she’s not being compassionate enough for the victims. I think she did the show because she likes fame and she wants to stay relevant,” the Big Shot with Bethenny star said. “She needs the money. … She’s on the show, which is not a great idea because they’re investigating the whole thing, but probably [is] something she needs or wants to do for her livelihood.”

“If I had a client who’s in the middle of something, I would say, ‘Say nothing,’” she continued. “And I double down on what I said before: the higher the lifestyle someone says that they have, the more you’re going to jump on and beat it like a dead horse.”

Earlier this month, Erika clapped back at a critic after she was spotted shopping at T.J. Maxx. Find out what she said…