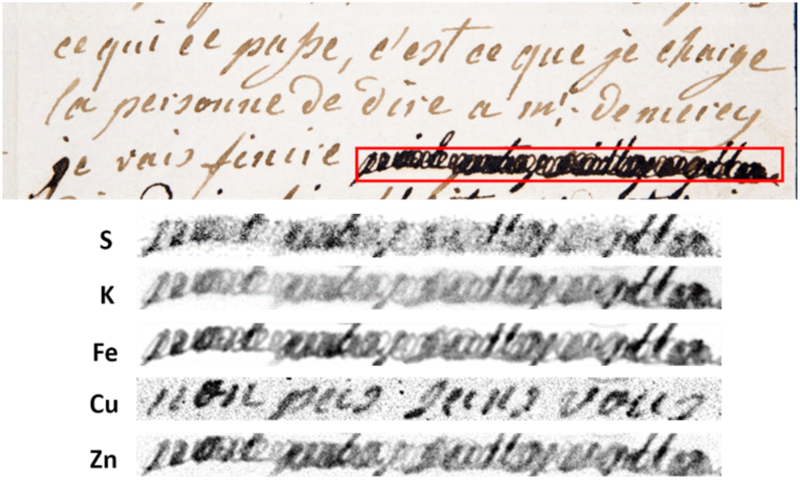 Even if you aren’t a giant history buff, you probably know that the French royal family had some difficulties in the late 1700s. The end of the story saw the King beheaded and, a bit later, his wife the famous Marie Antoinette suffered the same fate. Marie wrote many letters to her confidant, and probable lover, Swedish count Axel von Fersen. Some of those letters have survived to the present day — sort of. An unknown person saw fit to blot out parts of the surviving letters with ink, rendering them illegible. Well, that is, until now thanks to modern x-ray technology.

Anne Michelin from the French National Museum of Natural History and her colleagues were able to foil the censor and they even have a theory as to the ink blot’s origin: von Fersen, himself! The technique used may enable the recovery of other lost portions of historical documents and was published in the journal Science Advances.

Michelin’s team used X-ray fluorescence spectroscopy and found that the author of the letter used ink of one composition, and the censor used another that was quite different. The different fluorescence under X-ray allowed recovery of some of the hidden letters. Further data analysis allowed the interpretation of much of the text.

One interesting result: the ink in the blots matched closely with von Fersen’s ink, so the researchers think he blotted out the passages himself. Small wonder since they included lines from the Queen like:

“I will finish not without telling you my dear and loving friend that I love you madly and that I can never be a moment without adoring you.”

Probably not something you’d want the King to read later.

Granted, most of us don’t have X-ray spectrometers laying around. But this is an interesting technology detective story and who knows? Maybe it will inspire a hacker-developed spectrometer build. After all, you can build an X-ray machine. You can even make your own tube if you want to go that far.