Every Friday, Perfect Daily Grind rounds up the top coffee industry news from the previous week. Here are this week”;s stories.

Mon, 23 Aug -; Ember debuts on annual Inc. 5000 list. The list comprises the fastest-growing private companies in the US. Ember has made over US $80 million from its temperature-controlled thermal mugs.

Mon, 23 Aug -; Vortx Kleanair Systems launches the Ecofilter for gas roasters. The Ecofilter reduces smoke and odour after roasting by using water and electricity, as well as operating at lower temperatures. Vortx claims the new filter can reduce emissions by up to 90%.

Mon, 23 Aug -; Stellar Lifestyle and startup Crown Digital to introduce “ELLA” robot baristas in Singapore metro stations. ELLA barista robots can serve up to 200 cups of coffee per hour. The two companies are aiming to launch ELLA at 30 metro stations in Singapore by the end of 2022.

Tue, 24 Aug -; Lamastus Family Estates 2021 auction results announced. The highest bid received was US $4,100/lb for a natural processed coffee from Boquete, Panama. A total of 5.5 lbs were purchased by east Asian buyers -; totaling US $22,550. Total earnings from the auction amounted to over US $335,000.

Tue, 24 Aug -; Louis Dreyfus Company signs joint venture with Instanta to open private label coffee plant. The two companies will collaborate on an instant coffee factory in Vietnam. Construction of the plant is set for mid-2022.

Tue, 24 Aug -; Global sparkling coffee market expected to be worth US $1.4 billion by 2028. High consumption rates in Europe and the US are driving growth, as are RTD product launches. Online sales are anticipated to have the fastest CAGR of 13.7% from 2021 to 2028.

Tue, 24 Aug -; Ohio State University researchers successfully isolate the coffee compounds that contribute to mouthfeel. Two compounds (3- and 4-caffeoylquinic acids) were found to contribute to a sense of “mouthcoating”. Isolated melanoidin compounds have also been associated to astringency for the first time.

Wed, 25 Aug -; AgroBee offers 5% discount to Brazilian farmers affected by frost. The agritech company provides assisted pollination for a variety of crops, including coffee. The discount is offered to any farmers who have had 10% or more of their drops damaged by the frost in July.

Wed, 25 Aug -; ACE opens applications for new board members. Each member of the Board of Directors serves a 3-year term. Applications are open until 31 August.

Wed, 25 Aug -; London coffee business Grind raises £22 million (US $30 million) for at-home expansion. Grind focused mainly on direct-to-consumer coffee products (including capsules) during the pandemic. The coffee shop, bar, and restaurant brand will also expand into the US in 2022.

Wed, 25 Aug -; Australian roaster Pablo & Rusty joins 1% for the Planet initiative. The company has already been certified carbon neutral and is an official B Corp. The roaster will now donate 1% of its annual sales to non-profit environmental causes.

Wed, 25 Aug -; Ethiopia earns over US $115 million in July 2021 coffee exports. The country exported 31,145 tonnes of coffee throughout July -; exceeding the Ethiopia Coffee and Tea Authority’s estimates by 46%. Germany was the destination for approximately 20% of all Ethiopian coffee exports.

Wed, 25 Aug -; Pumpkin Spice and new flavours added to Starbucks autumn menu. The Pumpkin Spice Latte and Pumpkin Cream Cold Brew return to the seasonal menu. There is also a new Apple Crisp Macchiato, which can be served hot or cold.

Thu, 26 Aug -; IWCA, International Trade Centre, and SheTrades Rwanda Project to host Connecting Businesses to the International Women”;s Coffee Alliance webinar. The online event will focus on how coffee businesses and organisations can work with IWCA. Taking place on 30 August at 17:00 EAT, IWCA Executive Director Dr. Sarada Krishnan will be speaking at the webinar.

Thu, 26 Aug -; The Gentlemen Baristas launch “The Art of Coffee” as fundraiser for social enterprise Well Grounded. The London roaster partnered with the Bleur art gallery to create the coffee exhibition, which will run from 23 to 26 September. All profits from art sales will fund Well Grounded’s training programmes.

Thu, 26 Aug -; Dutch Bros Coffee IPO estimated to be worth US $3 billion. The drive-thru coffee chain is hoping to raise US $100 million through the IPO, which will be used for “new expansion strategies”.

Fri, 27 Aug -; COE Brazil 2021 to take place on 18 November. Despite extreme weather damaging coffee crops this year, the BSCA is confident Brazilian farmers will submit high-quality lots. Producers can apply to the competition until 8 September.

Fri, 27 Aug -; Mintel research suggests that 48% of 2020 product launches claimed at least one sustainable achievement. Claims of environmental or social responsibility have increased by 25% since 2012. The capsule category was found to have the lowest percentage of sustainable claims.

Fri, 27 Aug -; Our Gorongosa roaster donates 100% of profits back to Mozambique communities. The company claims to be releasing the first-ever single origin from Mozambique. Proceeds from sales will be reinvested in social and environmental initiatives in Gorongosa National Park.

Fri, 27 Aug -; Cropster to host Going Digital: The Value of Digital Tools on Profitability webinar on 7 September. In partnership with the International Trade Centre, the Spanish language event will be held at 10:00 PST. Vera Espíndola Rafael of Azahar Coffee, Manuel Antonio Camacho of Vinculum AI, and Elena Lokteva of Ally Coffee will be speaking on how digitalisation can benefit coffee businesses.

Fri, 27 Aug -; Nespresso trials drone delivery services in Israel. Capsules will be delivered to customers in Tel Aviv-Jaffa in partnership with several technology companies. The trial will assess the viability and safety of using drones to deliver Nespresso products. 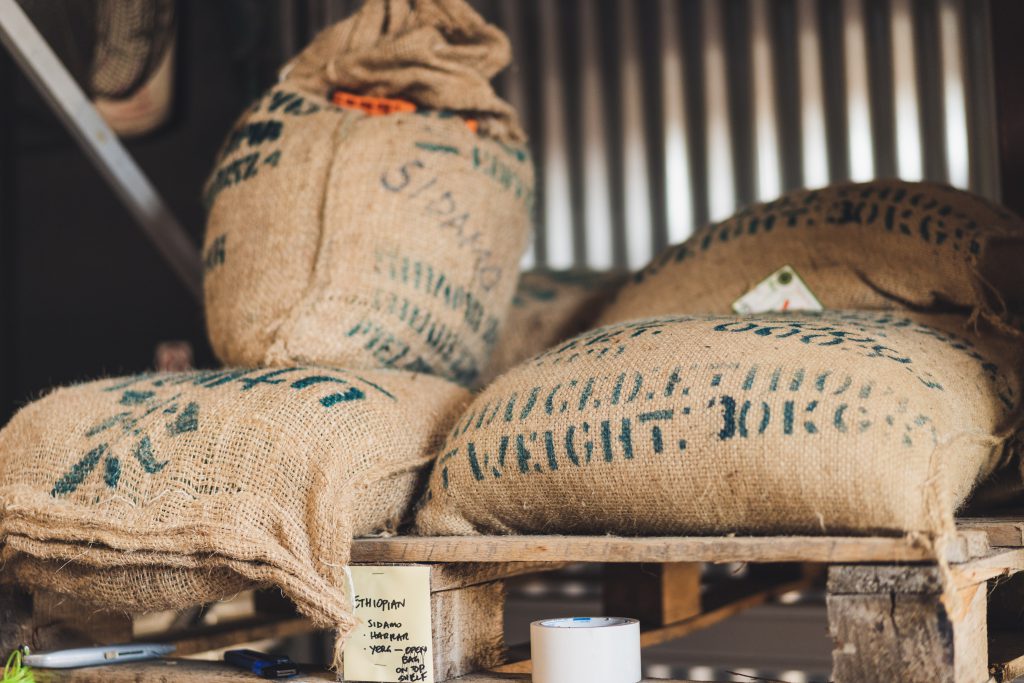 Here are a few news stories from previous weeks that you might find interesting. Take a look.

Fri, 13 Aug -; Roastelier hosts Instagram Live for launch in Brazilian market. The first countertop Roastelier machine from Nestlé Professional is available at A Ventana Café in Pinheiros, São Paulo. More machines will be in use at Kofi&Co and Perseu Coffee House soon. Through the Roastelier solution, roasters can access Brazil, Colombia, and Ethiopian “Prime Roast” beans.

Mon, 16 Aug -; Reuters article suggests Brazilian farmers move away from arabica to more robusta. In the wake of climate change and extreme weather, robusta production in Brazil has risen by 20% over the last three harvests. In contrast, arabica production has only increased by 6% over the past four years.

Mon, 16 Aug -; Tim Hortons China public merger valued at US $1.7 billion. The company will go public on the Nasdaq through its merger with Silver Crest Acquisition Corp. Tim Hortons China will aim to open 2,500 stores over the next five years -; 1,000 more outlets than previously planned.

Mon, 16 Aug -; SCA announces Covid-19 health and safety protocols for 2021 Specialty Expo. Negative test results and masks will be required for entry. Social distancing rules will remain in place for the event, which is taking place in New Orleans on 30 September to 3 October 2021.

Wed, 18 Aug -; Keurig Dr Pepper to source 100% of its coffee through sustainable certification system 4C. The new partnership is through the “;Drink Well. Do Good”; corporate responsibility platform. KDP will now require upstream suppliers to undergo a third party-certified audit.

Fri, 20 Aug -; How a New Approach to Pricing Can Improve Livelihoods in Coffee Farming Communities webinar available on YouTube. The one-hour virtual panel featured speakers from Heifer International, Bellwether Coffee, and Sustainable Harvest. The main focus of the webinar was determining a minimum fair price for coffee farmers.

Fri, 20 Aug -; Manchester City Football Club to use edible coffee cups at Etihad Stadium. The cups are produced by Scottish company BioBite using wheat flour, oat bran, and water. The wafer-like material can withstand temperatures up to 85°C (185°F) and are leak-proof up to 12 hours.

Fri, 20 Aug -; New York Coffee Festival postponed until October 2022. Due to the pandemic, the 2021 event will now take place from 7 to 9 October 2022. All purchased tickets will automatically transfer to next year’s festival.

Fri, 20 Aug -; Grubhub partners with Yandex Self-Driving Group for coffee and food delivery services. Yandex robot delivery services will be used on Ohio State University’s campus. The robots travel between 3 and 5mph, with space for several coffee cups inside each machine.

Sign up to our weekly coffee news recap to get a summary of all the biggest stories in the sector, delivered straight to your inbox every Monday.

Want to keep up with current affairs in the coffee industry? Check out last week”;s stories.