The far-right is convinced that the United States is just like Germany in the 1920s and 1930s. They believe this because an anti-vaxxer said so on Joe Rogan’s podcast.

Earlier this week, Rogan invited Dr. Robert Malone on his show. Malone is a virologist and immunologist who claims credit for inventing the mRNA vaccine in a pair of papers in 1989 and 1990. A more accurate telling is that Malone may have sparked hope for the vaccine, but is among hundreds who contributed to its development.

Malone was largely unknown until he emerged as an adamant opponent of COVID-19 vaccines last year. Malone swiftly parlayed his work on the vaccine and opposition to it into far-right stardom. Internet archives show that from June to December his Twitter followers grew from 4,500 to more than 500,000. Simultaneously, he did the anti-vaxxer tour of duty, appearing on Tucker Carlson’s and Steve Bannon’s shows and everywhere in between.

On Wednesday, Malone achieved the far-right coup de grâce by getting permanently suspended by Twitter. (He also reportedly somehow got temporarily suspended by LinkedIn at some point.) Archives show that prior to his suspension, he’d been a source of disinformation about the vaccine and treatments for COVID on Twitter.

Rogan, no stranger to promoting unproven COVID treatments himself, rewarded Malone by inviting him on his show. There Malone whined about his Twitter suspension and repeated conspiracy theories about the vaccine and COVID treatments that have made him beloved on the far-right. Curiously, he also admitted to taking the vaccine.

One comment he made in the sprawling three-hour interview has captured the far-right’s fancy.

Malone claimed that the United States is like Germany in the 1920s and 1930s. “Very intelligent, highly educated population, and they went barking mad. And how did that happen?” he said of Nazi Germany.

“The answer is mass formation psychosis.”

Continuing, he said, “When you have a society that has become decoupled from each other and has free-floating anxiety in a sense that things don’t make sense, we can’t understand it. And then their attention gets focused by a leader or series of events on one small point just like hypnosis. They literally become hypnotized and can be led anywhere.”

Malone—who is not a sociologist, psychologist, or anthropologist—said that the leaders who take charge in such a situation claim that they alone can solve society’s problems.

“They will follow that person. It doesn’t matter if they lie to them or whatever.”

He said that in 2019 people were “complaining, the world doesn’t make sense” and weren’t “connected socially anymore, except through social media.”

“Then this thing happened,” he said, presumably referring to the pandemic. “That is how mass formation psychosis happens and that is what has happened here.”

Malone’s comments went viral. As of this writing, a clip of them has been viewed more than 1 million times.

On Joe Rogan, Dr Robert Malone suggests we are living through a mass formation psychosis.

He explains how and why this could happen, and its effects.

He draws analogy to 1920s/30s Germany “they had a highly intelligent, highly educated population, and they went barking mad” pic.twitter.com/wZpfMsyEZZ

Malone’s hypothesis that America is becoming like Nazi Germany naturally appeals to the crowd that likens COVID restrictions to the Holocaust.

“The suppression of free speech has played a brutal role in this mass formation psychosis,” tweeted British actor and anti-woke crusader Laurence Fox.

“Probably the scariest interview I have ever seen,” commented @Moodred.

Far-right and conspiracist haven Telegram is abuzz with talk of Malone’s appearance. 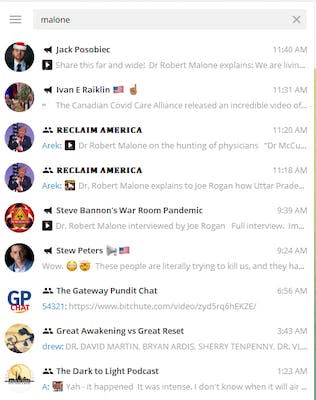 Discourse about mass formation psychosis has been bubbling up in far-right circles for a while. Malone himself has been talking about it for weeks.

A book published in November makes the same argument that COVID has given rise to the phenomenon, which has various names, including mass delusional psychosis and mass hysteria.

Not everyone on the conservative side of the political spectrum agrees that COVID and its associated fears and restrictions led to mass psychosis, however.

Last month, Dilbert creator and right-wing mouthpiece Scott Adams tweeted, “The Mass Formation Psychosis idea is total bullshit as an explanation for how we got where we are.”

“It is a flawed assumption that we started with some sort of baseline of rational thought and drifted. The simpler explanation is Fake News broke us.”

The post Conservatives think the U.S. is experiencing a ‘mass formation psychosis’ because an anti-vaxxer doctor told Joe Rogan so appeared first on The Daily Dot.