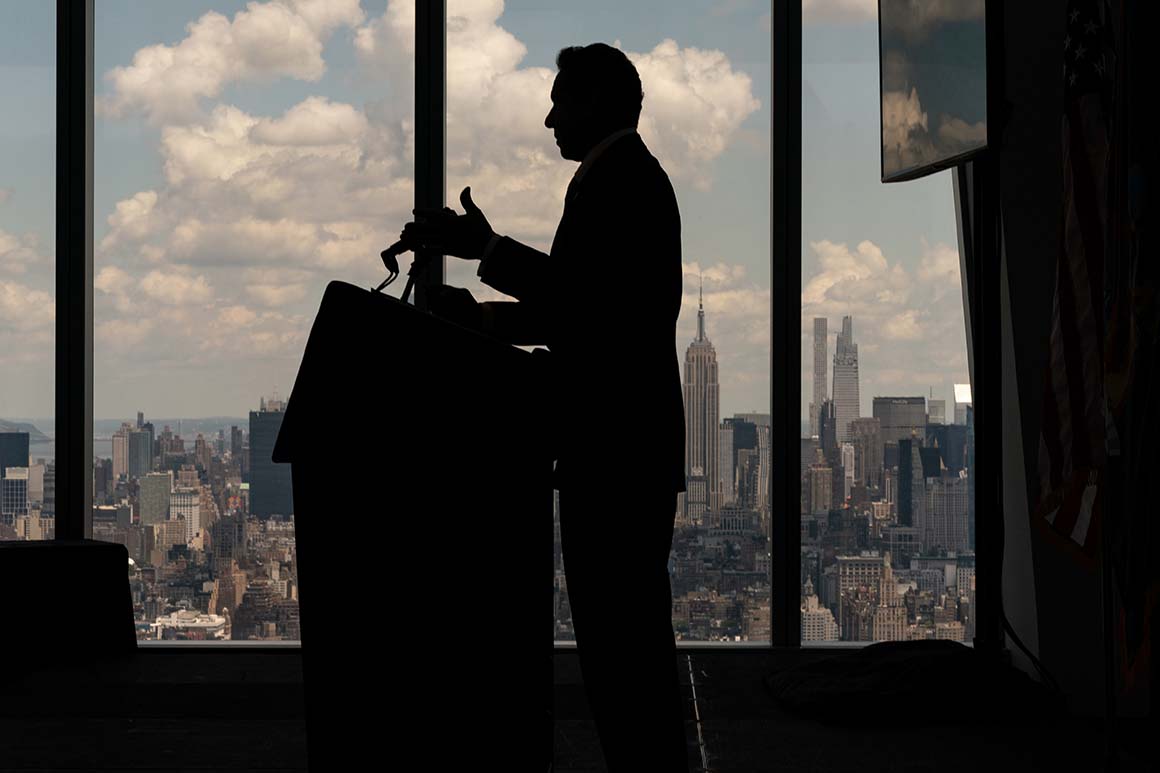 SAN JOSE, Calif. –; A year ago, New York Gov. Andrew Cuomo and California Gov. Gavin Newsom were bandied about as future Democratic presidential candidates. By next month, both could be political exiles.

Such is the oscillating reality of a governor in the pandemic era –; and a foreboding sign for national Democrats as they face already challenging midterm elections.

While the governors”; individual struggles are starkly different –; Newsom remains favored to stave off a Sept. 14 gubernatorial recall, whereas Cuomo is resigning in Nixonian fashion in the face of an almost-certain impeachment –; Democrats are scrambling to head off the damage of losing their highest-profile governors within weeks.

Newsom”;s dismissal would be painfully demoralizing to Democrats who wield total control over California”;s government. It could also energize Republicans by showing they can win even in the bluest parts of the country. The GOP would inevitably frame Newsom”;s defeat as a repudiation of Democratic governance.

“;Don”;t think for a second this isn”;t also about 2022 and being able to hold the House. The consequences are profound," Newsom said at a get-out-the-vote rally in San Jose on Monday. “;A “;no”; vote would be heard loud and clear, not only across this state, but across the country."

The White House has contemplated getting more invested in Newsom”;s defense in recent days, and the governor said Saturday that the two camps are in the process of trading schedules to see when President Joe Biden and Vice President Kamala Harris would be available to join the campaign trail.

Though the outcome of the recall is still weeks away, some Democrats are already fretting about the potential knock-on effects in New Jersey and Virginia, the only other states with gubernatorial elections later this year and ones that are often viewed as weather vanes for national political currents.

“;Other than the Virginia governor”;s race, this is the most important thing going on in the United States,”;”; veteran Democratic strategist Garry South –; who advised Gray Davis, the only previous California governor to be recalled –; said of the Newsom recall effort.

Newsom himself has employed that siren as he and his supporters are dialing up their rhetoric as polls show a tightening race, warning Democrats that his loss would reverberate beyond California and broadly imperil progressives”; agenda.

States have gained outsized influence during the pandemic through their different strategies of combating the coronavirus, and California and New York have set the tone for Democratic regions. This summer, Newsom was first to require that all students wear masks in schools and led the way on mandating vaccines for teachers –; getting ahead of the Biden administration.

The leading Republican recall candidate, Larry Elder, has vowed to remove those restrictions immediately and suggests he can turn California into a red state on Covid rules. Republicans are giddy at the prospect of improbable reversals in the two biggest Democratic strongholds where governors were being celebrated last year.

“;One down. One to go,”;”; tweeted conservative radio host Eric Metaxas about Cuomo”;s resignation, along with side-by-side photos of the New York and California governors.

It’s been a remarkable fall from grace for Cuomo, who was widely praised for his daily coronavirus briefings, which even won him an honorary Emmy Award. And it would have been difficult a year ago to imagine Newsom being ousted, given that his approval ratings early in the pandemic soared far higher than during his first year in office.

National Republicans smell blood in the water and are eager to yoke Democrats to Cuomo after he announced plans to resign following a damning New York attorney general report detailing a pattern of sexual harassment and a lingering cloud of investigations into several other matters.

While Newsom”;s woes and Cuomo”;s toppling stem from different sources, both men losing their jobs could bolster a message about “;the larger failures of Democratic governors,”; said Republican Governors Association spokesperson Joanna Rodriguez. Voters have been paying closer attention to their governors as state governments lead the response to coronavirus, Rodriguez argued.

Either way, the California recall is likely to be a major test case of electoral politics in the Biden era.

The GOP would be able to convey “;a sense that Republicans have the wind at their back and that voters are turning against the Democrats”; whereas among the Democratic base, “;a lot of activists and contributors would be rattled,”; said Jack Pitney, a professor of politics at Claremont McKenna College and former Republican campaign operative.

Leading Democrats are warning voters that the effects would go well beyond Covid-19 and political momentum. House Speaker Nancy Pelosi on Wednesday, at a South Central Los Angeles gathering of teachers and parents to celebrate the “;Biden child care tax credit,”;”; called the California recall a GOP effort at “;skullduggery”; aimed to undo the national Democratic agenda.

“;Our system allows it … but we do not like it, and we will defeat it,”; Pelosi said, seated alongside Rep. Maxine Waters (D-Calif.), surrounded by crowds of children and mothers in a packed community room.

While Republicans have found periodic success in congressional races or various local offices, their repeated statewide failures in California and New York have often hindered their ability to generate investments from the national party apparatus.

“;For Republicans, it’s a very difficult place to compete, so it’s sometimes off the table as they look at allocating their resources,”; New York Republican operative Dave Catalfamo said.

The collapse of Cuomo, and potentially Newsom, could be a jolt of adrenaline to two state Republican parties that have atrophied in recent years amid a succession of statewide political losses. Arnold Schwarzenegger”;s 2006 victory was the last for the GOP in California; George Pataki”;s second reelection in 2002 was the last time for New York Republicans.

Such a result might offer some silver linings for Democrats, like allowing leaders from states outside of the New York-California bipolarity to fill the void left by Cuomo and Newsom. And New York Lt. Gov. Kathy Hochul, who is due to become the state”;s first female governor, has reportedly had to relocate fundraising venues because of surging donor interest, a sign of a burst of enthusiasm among Democrats eyeing a post-Cuomo life.

The flip side, of course, is that a Newsom victory would be a reassuring sign for Democrats that they”;d be able to hold up as proof of the party”;s electoral durability, and provide a useful counter to Republican attempts to wield Cuomo as a cudgel against them.

However the larger battle in New York will not be for more than a year, when Republicans will go up against Hochul in her quest for a full term –; or whomever Democrats nominate. Rep. Lee Zeldin (R-N.Y.) is the party”;s presumptive choice, but he is still fending off an underdog fight from Andrew Giuliani, and the GOP is having to retool its messaging with Cuomo on the outs.

Likewise the parties will also square off again for control of the California governorship in 2022, a contest whose contours will undoubtedly be sculpted by the results of the recall vote. Newly energized Republicans could lead to higher turnout and more GOP investment in the state”;s congressional swing districts next year.

California Democrats are urging their voters to stop Republicans in their tracks now.

“;If they get this state,”; Newsom told supporters on a recent get-out-the-vote call, “;they can weaponize it from a national meta-narrative, the impacts are profound for Chuck Schumer, for Nancy Pelosi, for President Biden.”;