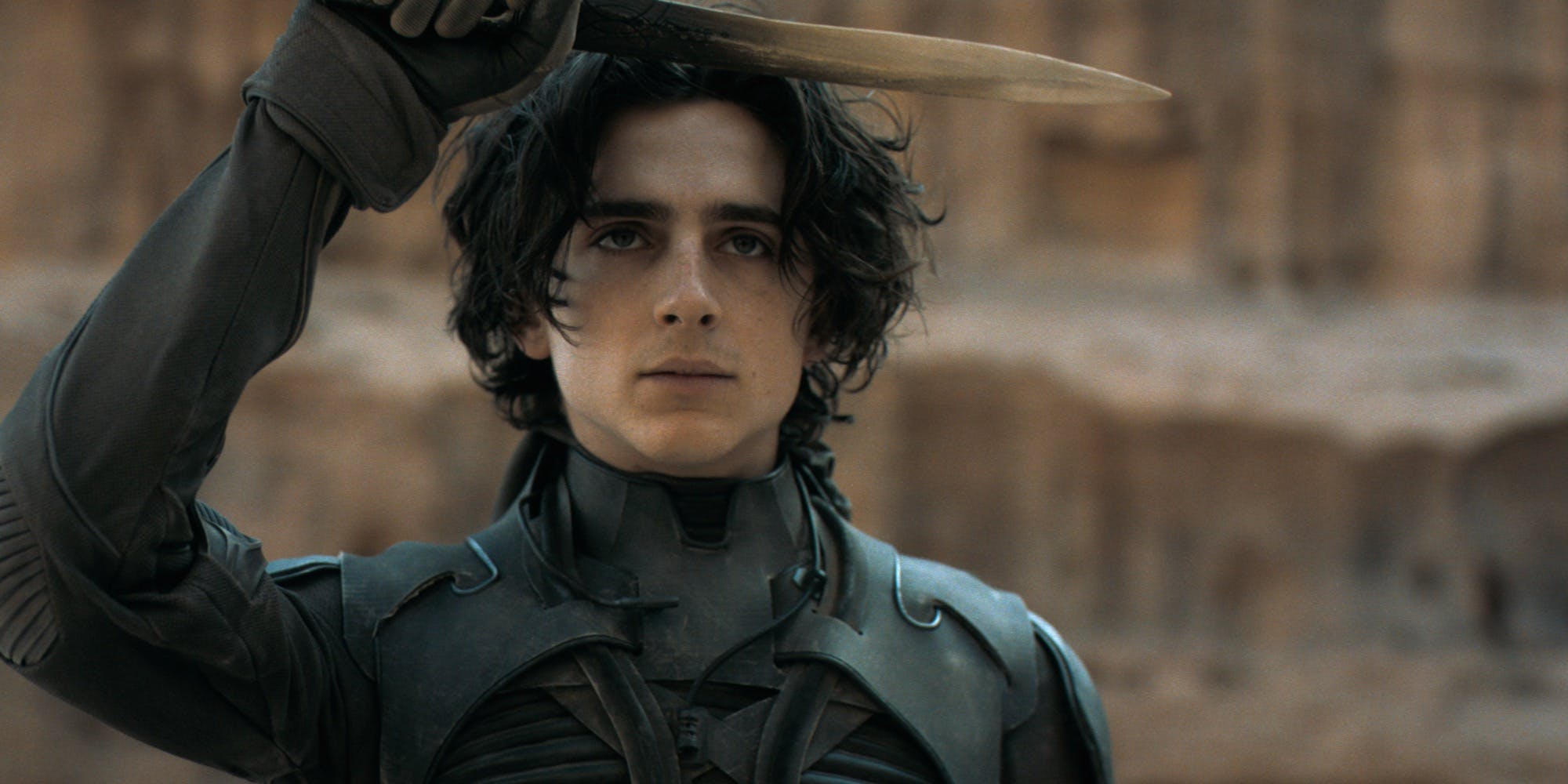 Dune, by design, feels incomplete. Based on Frank Herbert’s seminal novel—which has inspired everything from Alien and Star Wars to Robert Jordan’s Wheel of Time series in the 56 years since it was published—Dune doesn’t attempt to cram hundreds of pages of dense world-building onto the screen. It’s only the first half of a proposed two-film adaptation, indicated both by the “Part 1” attached to the title card as well as the insistence from Chani (Zendaya), one of the Fremen who calls the planet Arrakis home, that “This is only the beginning” that bookend the film.

That proposed sequel being greenlit depends on a multitude of factors, but Dune itself offers just as convincing of an argument. (And not just for its ending that will instantly make you want more.) There have been many attempts to take on Dune over the years, some of which were abandoned or became critical disasters, but in the hands of Denis Villeneuve (Arrival, Blade Runner 2049), Dune is a dense, visual spectacle (both in its use of visual effects and the cinematography from DP Greig Fraser) that never feels so overwhelming that it’s completely unapproachable. 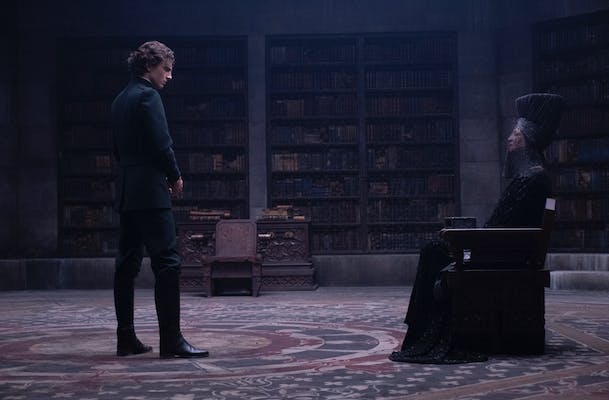 Reading Herbert’s book might help immerse you into Dune, but Villeneuve, who co-wrote the script with Jon Spaihts and Eric Roth, deftly introduces Herbert’s jargon and some of its more involved world-building that have spent through the eyes of its reluctant hero, Paul Atreides (Timothée Chalamet). In Dune, an influential religious order known as the Bene Gesserit who have spent centuries enacting a concise breeding program, the ability to compel someone to do something with only your voice (a pretty blatant influence on Star Wars’ Jedi mind trick), and a prophecy proclaiming the eventual emergence of a messiah are only just scratching the surface, and while Dune doesn’t directly throw the audience into the deep end, it’s not exactly hand-holding the entire time.

Set thousands of years in the future, we find Paul and his family, House Atreides, on the verge of major change. Paul’s father, Duke Leto Atreides (Oscar Isaac), has been preparing him to eventually rule but admits that if he doesn’t want to, that’ll be OK too. Lady Jessica (Rebecca Ferguson), Paul’s mother and Leto’s concubine, has him preparing to inherit his other family destiny. The Bene Gesserit, which Jessica adheres to even when it causes her outright pain to do so, is intrigued by Paul, but we’re also reminded that his existence was also kind of a mistake: Jessica was supposed to birth daughters, but she fell in love with the ruler she was supposed to influence and gave him the son he wanted instead. (In Herbert’s book, the Bene Gesserit have the ability to alter a baby’s gender during pregnancy.)

Leto has been given control of the desert planet Arrakis by the empire, which is home to spice (or melange), an invaluable resource that the empire covets. The move to put House Atreides in control of Arrakis doesn’t go over well with its previous guardians, House Harkonnen, which is headed by Stellan Skarsgård’s Baron Vladimir Harkonnen, who immediately plots to take out the rival house while Atreides looks to align with the indigenous Fremen population, who remain wary of what the latest group of colonizers attempt to promise them. Dune’s players all walk a political tightrope with both their way of life and untold power at stake—we’re told that spice has the ability to heal, extend a person’s life, heighten senses, fuel space travel, and it can also unlock visions, among other things; longer exposure also turns someone’s eyes a bright blue. 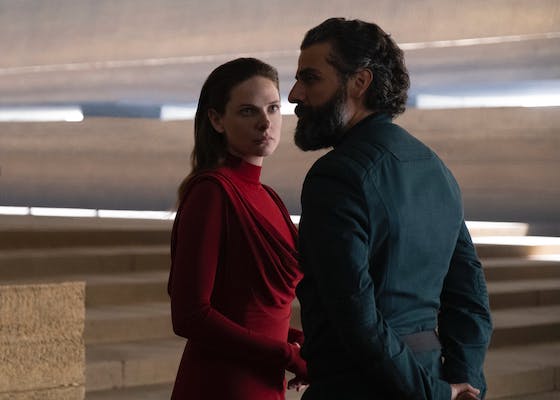 Despite being surrounded by familiar faces—including Jason Momoa, Josh Brolin, and Stephen McKinley Henderson as some of House Atreides’ formative advisers—Paul is constantly haunted by his dreams, which often come true. The Bene Gesserit believe he could be the messiah they’ve spent centuries trying to create; he’s pushed and prodded and put through immense pain for the effort. But even before Paul truly takes some of those vital steps in the Hero’s Journey, he’s already resentful of everyone who had a hand in crafting him for this role because he already knows just what he’s capable of, both the good and the bad; Paul’s anguish as he lashes out at his mother after a series of monumental events is palpable.

Arrakis is harsh and unyielding; if Shai-Hulud (the name that the Fremen give to the planet’s sandworms) doesn’t get you, chances are the heat and dehydration will. In Villeneuve’s hands, there’s something intricately beautiful in both the futuristic and austere structures that House Atreides calls their home until it’s not and the vast open desert featuring spice-riddled sand that shifts and moves like waves. It’s not much of a surprise that after Arrival and Blade Runner 2049, several sci-fi staples in Dune—like the battles, which start out huge and grow smaller in scale as the film goes on—feel fresh. And the sandworm itself might not stray too far from other cinematic creatures, but oftentimes, the threat of it coming to upend everything is more effective than seeing it appear before our eyes. All of it’s held together by an immersive score from Hans Zimmer.

Dune’s cast is absolutely stacked, and that, alongside the fact that Dune is only one part of a larger story, means that some of the characters (notably Zendaya’s Chani, who spends much of the film as a literal figment of Paul’s dreams before we meet her) get the short end of the stick. (Villeneuve has said that she’ll have a much bigger role in the planned sequel.) But each character is given a moment or two to shine, with Ferguson being a particular standout.

The script is sometimes a little clunky (not even Oscar Isaac can proclaim something like “desert power!” upon seeing one of Arrakis’ infamous sandworms without it sounding completely cheesy), and the pacing can sometimes throw you off. And while several aspects of Dune (both the film and the book)—from some of its jargon to the Fremen people—were heavily influenced by Islamic as well as Middle Eastern and North African cultures, very little of that is represented by the casting.

Dune is wild, downright weird, and doesn’t try to dumb down some of its complexities. It’s a higher level of entry in some regards, but the rewards are that much sweeter.

Dune premiered at the New York Film Festival on Oct. 7. It will debut simultaneously in theaters and on HBO Max for 30 days on Oct. 22.

The post ‘Dune’ is a dense and dazzling visual spectacle appeared first on The Daily Dot.