Across the coffee industry, there is a growing understanding that the Chinese coffee market is both rapidly growing and an incredible opportunity for those who can access it. According to Statista, coffee consumption increased from 3.1 million bags in 2017/18 to 3.9 million in 2020/21. In the space of just four years, this is an increase of 26%.

These increasing levels of consumption mean that Shanghai now boasts more coffee shops than any other city in the world. It”;s estimated that across China, a new Starbucks (one of the country”;s two dominant chains, alongside Luckin Coffee) opens every 15 hours. For those who can break into this market, the demand is certainly there.

However, breaking in is not as simple as it might sound. Much like everything from digital payments to food deliveries and taxi services, coffee consumption in China is underpinned by the country”;s unique digital ecosystem.

I spoke to two local experts to understand more about this system, the country”;s coffee market, and the main players in the Chinese coffee sector. Read on to find out what they told me. 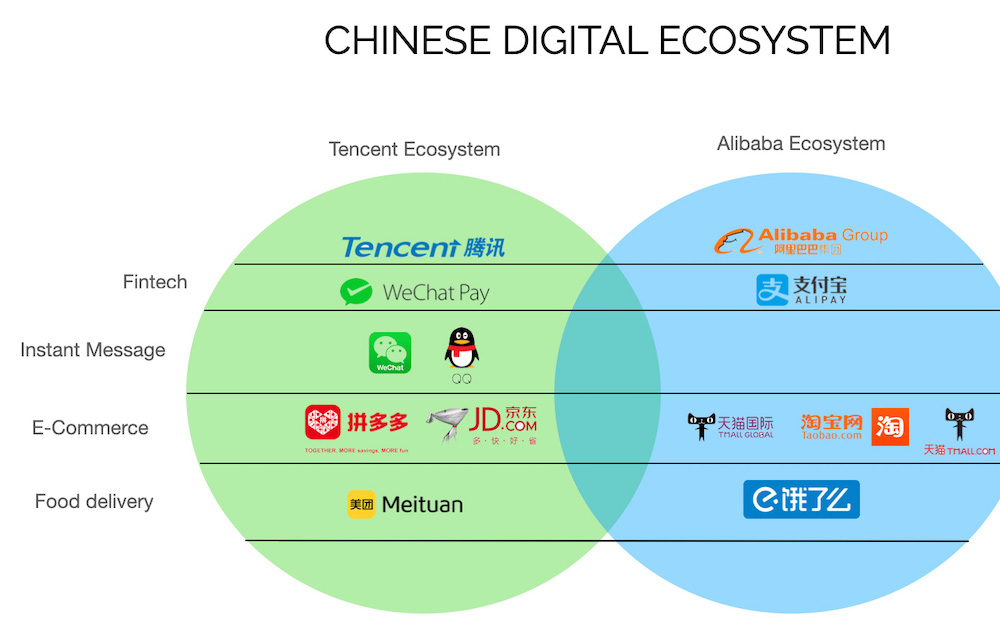 China has the largest ecommerce market in the world. It accounts for around half of all digital transactions completed globally. The ecommerce sector in China is bigger than corresponding markets in Germany, the UK, France, and Japan combined.

Monthly internet users in China averaged 939.8 million in 2020, and this figure is believed to be rising at a rate of around 10% per year. Mobile use is also incredibly high: according to McKinsey, the country has a total mobile transaction value triple that of the USA”;s.

All of this economic activity takes place in a highly digitised economy. Most of this is owned by two rival conglomerates: Tencent and Alibaba. Between the two of them, they have developed the most widely-used mobile applications and platforms in China.

Alibaba owns and operates Tmall and Taobao, both online marketplaces. While Taobao is consumer-to-consumer (similar to eBay), Tmall is business-to-consumer (closer to Amazon). Alibaba also runs Alipay, a digital payments service, as well as Eleme, a food delivery service.

Tencent, meanwhile, owns JD.com and Pinduoduo (both online marketplaces), WeChat Pay (digital payments) and Meituan (food delivery). Many of these services are direct competitors in the same sector; as such, Alibaba platforms are not compatible with Tencent platforms, and vice versa.

The Chinese ecommerce sector is totally dependent on these two private companies. Over the years, Tencent and Alibaba have built their own independent ecosystems by absorbing or acquiring other, smaller companies and integrating them.

For example, NetEase Kaola was the world”;s top cross-border ecommerce platform in 2018. In 2019, it was acquired by Alibaba for US $2 billion and integrated into the company”;s Tmall operations.

Alibaba Group is the brainchild of Chinese business magnate Jack Ma. Its Tmall and Tmall Global subsidiaries are the biggest ecommerce platforms in China, with a combined total of more than 500 million buyers.

Alibaba also owns Taobao, the largest customer-to-customer (C2C) marketplace in the country. Taobao is home to roughly 10 million merchants, who sell an endless variety of products to more than 300 million daily users. 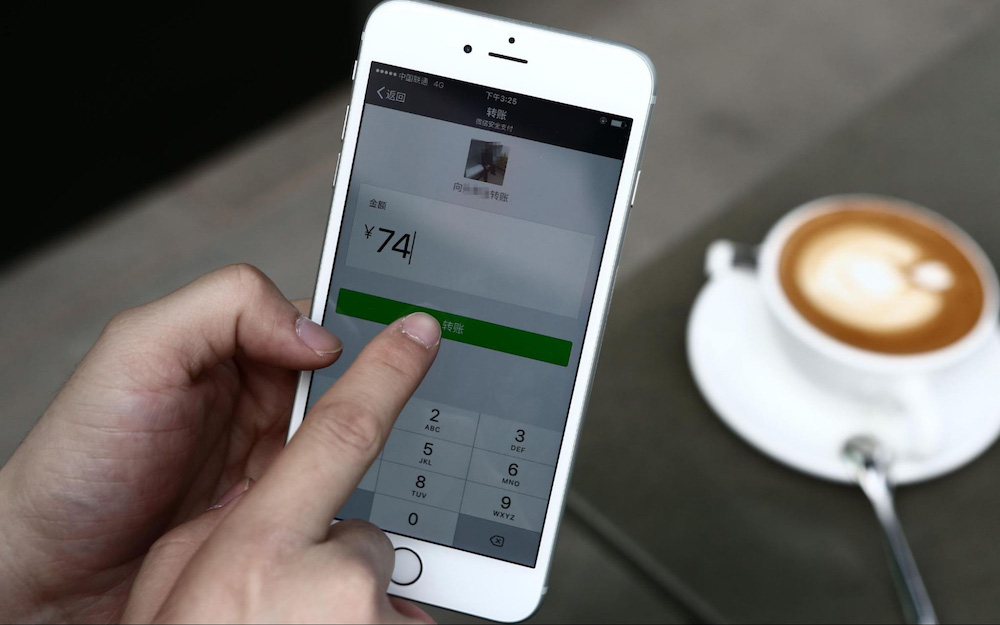 Tencent”;s primary ecommerce platform is JD.com, which relies on strong warehousing and logistics systems, much like Amazon. Pinduoduo, meanwhile, functions on a system of “;team purchases”;, where buyers team up to purchase the same product, thereby securing lower prices per buyer.

Tencent”;s mainstay, however, is WeChat. WeChat is the world”;s most popular app, attracting well over a billion active users per month. Originally designed as an online messaging service, it has since come to integrate a range of different services.

It now functions as its own huge social media network, bringing together everything from messaging and online gaming to shopping and digital payments.

Steffi Nöel is a Project Leader at Daxue Consulting in Shanghai. She describes WeChat as a “;Swiss army knife super-app that seemingly does everything”;.

She says: “;Alongside messaging, WeChat now offers other services, including mobile payments and transfers, online gaming, music, news, and shopping.”;

However, it”;s the capacity for something called “mini-programs” that make WeChat the most popular app in the world, Steffi says.

“;A mini-program is a sub-application within the WeChat ecosystem that provides advanced features to users,”; she explains. “;These include ecommerce, task management, coupons, payments, ordering food, and so on.

“;The mini-program system allows users to access any of these WebApps without leaving WeChat.”;

These mini-programs allow third-party companies -; including coffee traders and coffee shops -; to develop their own apps within WeChat.

By allowing users to buy directly from a social media equivalent, retailers can streamline the sales process. This turns WeChat into a key sales platform: in 2020, these transactions in mini-programs exceeded a value of US $246 billion in total. 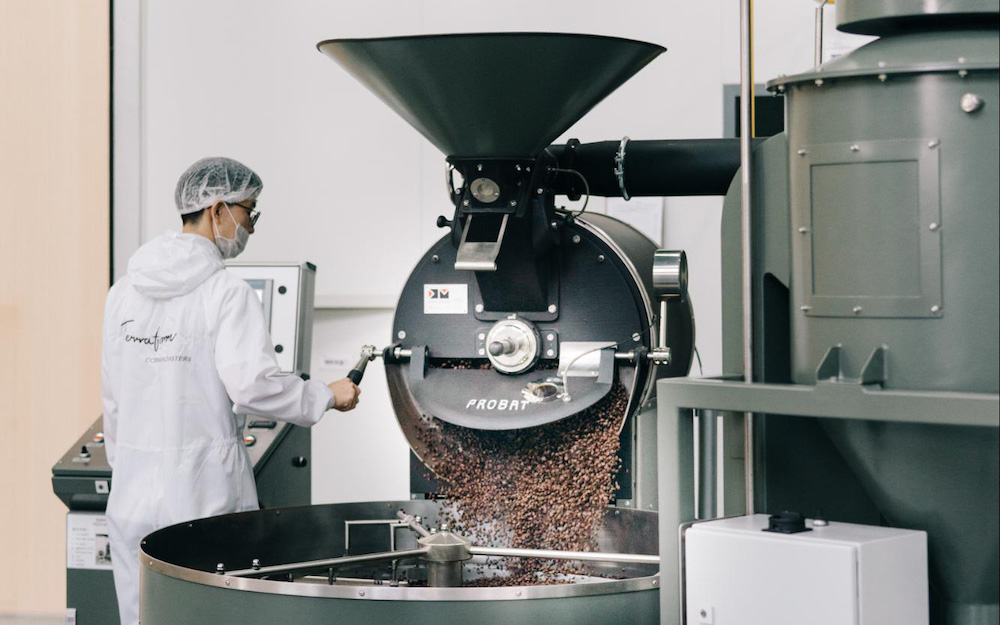 Where does coffee fit into all this?

The global coffee supply chain is already leveraging the reach of these ecommerce platforms. Green coffee traders are using them to supply roasters, for instance. Roasters then use it to sell to coffee shops, who in turn deal with customers one-on-one using services like WeChat and Taobao.

In China, popular domestic coffee brands like Lisun, Hogood, and Luckin Coffee can be bought on any number of stores across WeChat, JD.com, and Tmall.

However, these brands do face competition from some western coffee brands -; including Costa and Starbucks.

According to GMA E-Commerce Agency, Starbucks has as many as 600 stores in Shanghai alone -; despite the fact that it has only been present in China since 1999.

Today, across the country, coffee shops are popping up by the thousand. Whether local or foreign, they all make use of China”;s ecommerce platforms. This is testament to one thing: the stark increase in local coffee consumption.

This is understandably attracting as many overseas businesses as it is domestic brands to enter the Chinese coffee market. For example, espresso machine manufacturer La Marzocco opened its own flagship store last year on Tmall, while Hario now has its own WeChat mini-program.

For overseas brands that can “;crack”; these digital ecosystems, they can be incredibly appealing. Mini-programs on WeChat, for instance, integrate and centralise shopping, shipping, and payment, offering unprecedented levels of convenience for consumers. 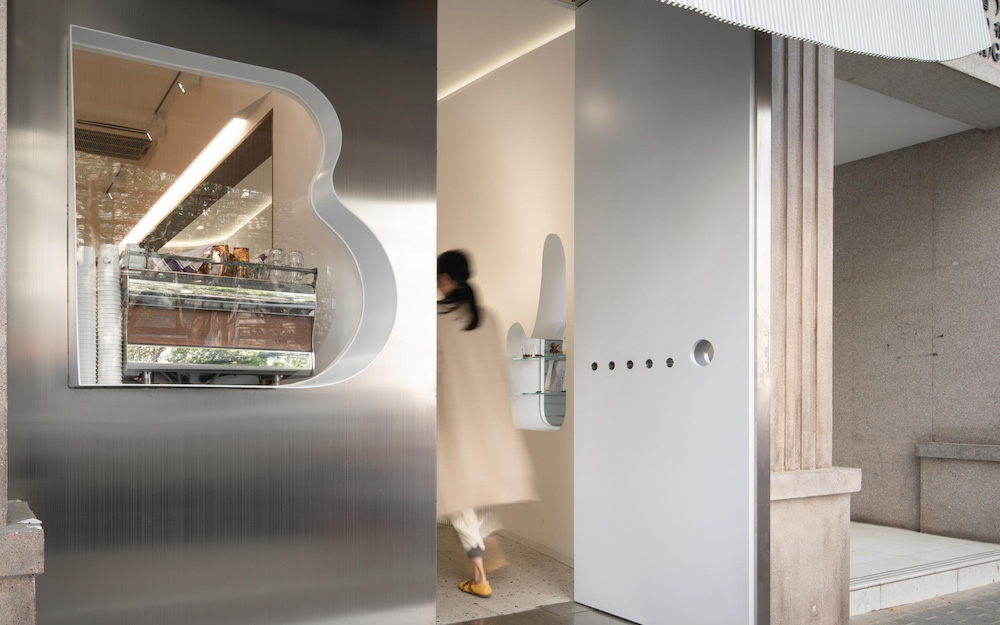 How can coffee businesses break into the market?

The Chinese coffee market is certainly full of opportunity for overseas coffee brands, but understanding its intricacies is completely necessary for businesses looking to capitalise on it.

Before doing anything else, businesses should start by understanding how China”;s ecommerce ecosystem functions. International trade always comes with its share of barriers and challenges, but understanding what makes Chinese ecommerce different is especially important.

There are some crossborder ecommerce (or haitao) opportunities open to overseas brands, which offer a more flexible alternative to setting up a company in China. Popular platforms include Tmall Global and JD Worldwide. These can be a particularly good opportunity for companies seeking to sell their coffee in bulk.

For those more familiar with this ecommerce system, there are even some WeChat mini-programs tailored to the coffee trade. One example is the Coffee Exchange Platform, which connects more than 1,500 local specialty roasters to green coffee traders.

In addition, some coffee brands in recent years have also utilised the Electronic World Trade Platform (eWTP). This is an initiative that supports SMEs from around the world to trade in China using Tmall.

One such example is Gorilla”;s Coffee, a farmer-founded coffee company from Kigali, Rwanda, which now sells roasted coffee to cafés and consumers through the platform. 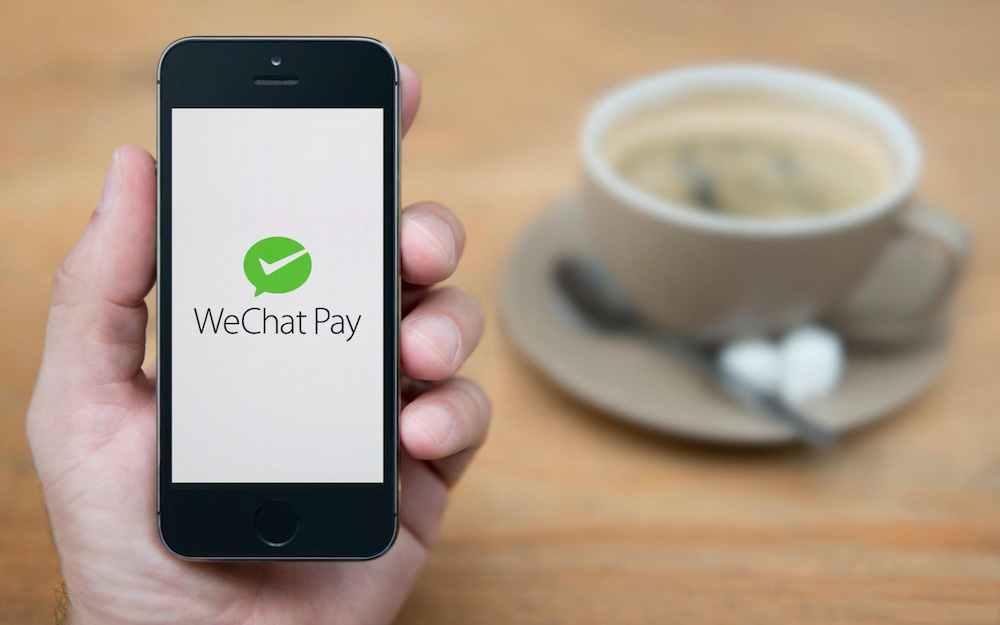 Is this ecosystem good for coffee businesses?

Ji Hengtao is the Chief Manager and Master Roaster at Black Sheep Espresso in Shanghai. He uses Taobao to sell his Terraform coffee brand, and says that it”;s his main online sales channel for roasted coffee.

“;Online shopping on Taobao is a habit for most Chinese people,”; he says. “;It can help some new brands to quickly accumulate user volume and become popular in the early stages of their development.”;

Because this ecommerce system is accessible for domestic SMEs, it has supported the rise of a number of small Chinese coffee brands. This accessibility, integration into everyday apps like WeChat, and a rapid rise in coffee consumption makes the sector an attractive proposition for many business owners.

However, Hengtao also warns that the popularity of brands like Starbucks and Luckin alongside the convenience of China”;s ecommerce networks has created “;price wars”; between local brands. This, he says, is a serious barrier for any kind of widespread consumption of higher-quality coffee. 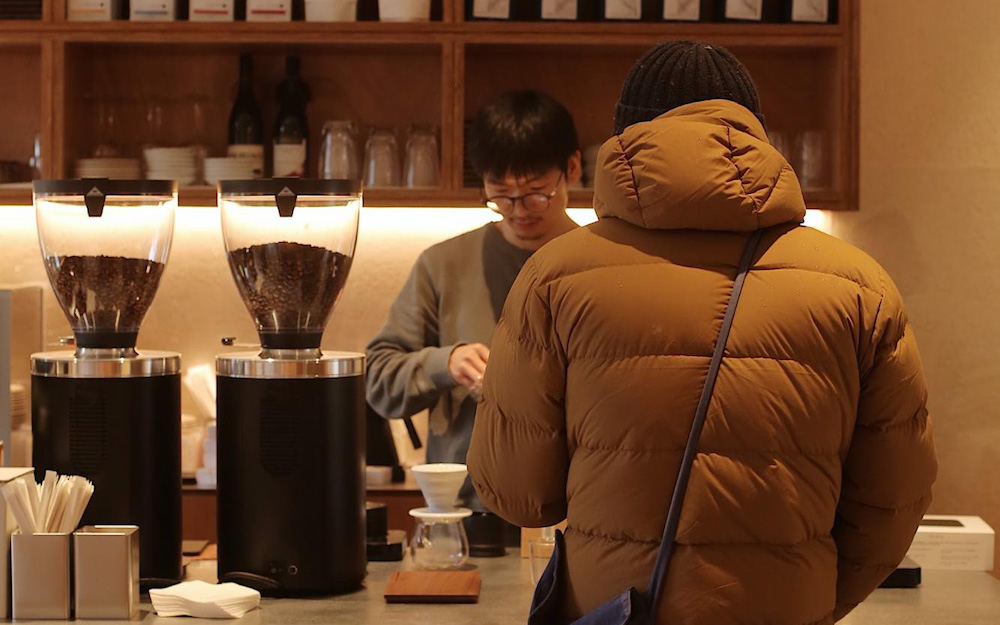 It”;s clear that for all the opportunity the Chinese coffee market offers, breaking in is no easy feat. Learning to understand the unique ecommerce network that powers so much of the country”;s trade isn”;t just important -; it”;s essential.

Going forward, overseas coffee brands can do a number of things to enter the market. This includes working through crossborder ecommerce or haitao systems, as well as facilitators like the eWTP.

However, the best place to start is simply building an understanding of how the Alibaba and Tencent ecosystems function. Without that, coffee businesses relying on ecommerce in China will simply not be successful.

Enjoyed this? Then read our article on specialty instant coffee in China.