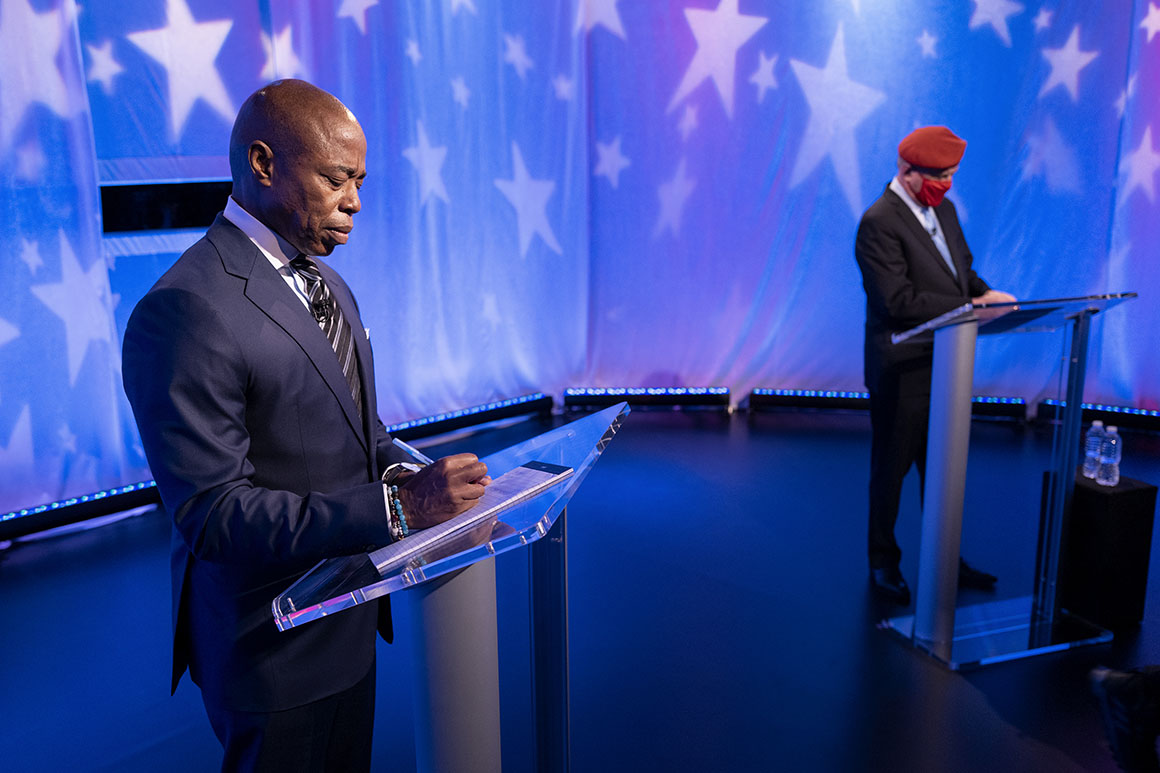 NEW YORK –; Eric Adams beat out a slate of qualified Democrats, survived a residency scandal that drew national headlines and is all but assumed to be the next mayor of New York. The one thing standing in his way: a general election against one of the city”;s most colorful public figures.

Adams, the Brooklyn borough president and former NYPD captain, won his party”;s nomination after pushing a tough-on-crime message. Curtis Sliwa, a Republican best known for founding the vigilante group Guardian Angels, had the opportunity to test the limits of that strategy Wednesday night in the first of two debates ahead of next month”;s general election.

As Sliwa repeatedly went on the attack, Adams attempted to maintain a posture of being above the fray.

“;I”;m speaking to New Yorkers, not speaking to buffoonery,”; he said, declining to respond to one of the many broadsides Sliwa launched his way.

The debate at WNBC’s Rockefeller Center studios was co-hosted by POLITICO, Telemundo 47, the Citizens Budget Commission and the New York Urban League –; one of two official debates ahead of the Nov. 2 general election.

Adams has a big edge in a city where Democrats outnumber Republicans by a 7-to-1 margin. But Sliwa, whose safety patrols became synonymous with the crime-ridden New York of the 1980s and 1990s, has vowed to give the former state lawmaker a run for his money. He”;s been battering Adams over his residency, his close ties to big donors and his ethical record as a state senator, and arguing Adams won”;t do enough to keep New Yorkers safe.

“;I”;m the only candidate standing on this stage that has said I will hire more police officers,”; said Sliwa, pushing his plan to increase the size of the NYPD and increase the use of stop-and-frisk in areas with high gang activity, reviving a controversial tactic that was previously challenged in court.

Adams, who spent more than 20 years at the NYPD before going into politics, shot back that he was wearing the uniform while his opponent was “;playing cop.”;

"Let’s be clear, New Yorkers are going make the determination of a person that wore a bulletproof vest, protected the children, families of the state and fought crime against a person who made up crimes, so that he could be popular," he said, referencing Sliwa”;s admission that the Guardian Angels had staged some crimes for publicity.

Sliwa went after Adams for his past comments that he would carry a gun to church and would be armed as mayor.

“;You are a proponent of carrying a gun,”; he said. “;If you”;re going to reach young men who are using guns in violent actions, you cannot say “;Do as I say but not as I do.”; Why did you need a gun? I”;ve never used a gun and I”;ve been shot five times.”;

Adams countered that his opponent “;makes up things, like he made up his crimes.”;

The winner of the Nov. 2 election will take over from term-limited Mayor Bill de Blasio, leading the nation’s largest city as it tries to move on from a pandemic that hobbled its economy and fueled widespread public safety and quality of life concerns. Adams has framed himself as the future of the Democratic party. He would be the second Black man to lead New York.

But Sliwa has also been honing his attacks, painting Adams as a tool of the elite who has been spending his time fundraising in the Hamptons and vacationing in Monaco. Sliwa has kept up an active campaign schedule in recent months –; though he has struggled to get attention, even with publicity-friendly events like his trip to the New Jersey apartment Adams co-owns with his partner, carrying a milk carton with the candidate”;s face on it. Adams has kept a lower profile and has been reluctant to engage his opponent.

In the debate, the two men disagreed sharply over a Covid-19 vaccine mandate for city workers, which Mayor Bill de Blasio announced Wednesday will require cops, firefighters and the rest of the workforce to get at least one shot by Nov. 1.

“;I believe the mayor”;s action today was correct,”; Adams said, recalling the city”;s suffering at the height of the pandemic when tens of thousands died. He said he would have approached the issue differently, seeking an agreement with unions, but will keep the mandate in place if elected mayor.

Sliwa condemned the move to penalize first responders if they don”;t get vaccinated and made one of several attempts throughout the night to tie Adams to the outgoing mayor.

“;We cheered them every night at 7. Then all of a sudden we decided, de Blasio –; who has supported Eric Adams here, they”;ve been a team –; that all of a sudden they would lose their jobs. That was a horror,”; he said. “;We should never fire them for that reason.”;

Adams also called for a vaccine mandate for public school students, while Sliwa opposed such a move.

Sparks flew when the candidates were asked to explain why New Yorkers should trust them –; in light of Sliwa”;s acknowledgement that he fabricated crimes, and persistent questions about whether Adams truly lives in the Brooklyn brownstone he claims is his home.

Sliwa said he has apologized for his mistakes, and took the opportunity to whack his opponent, who has been courting business leaders and high-dollar donors.

“;Eric Adams is with the elites in the suites –; the TikTok girls,”; he said.

Adams attempted to explain why he filed tax returns saying the home where he claims to live is not his primary residence, blaming the problem on his accountant, who was homeless at the time. But he could not say how many nights he spends at the Bedford Stuyvesant apartment, on the ground floor of a building he owns.

“;I stay at my brownstone. I live in Brooklyn. That”;s my primary residence,”; he said, adding that he sometimes also stays in his office at Borough Hall. “;I don”;t jot down a number of days I”;m there. But that”;s where I lay my head.”;

Sliwa responded by referencing a POLITICO report that Adams took a summer trip to Monaco, a destination he would not disclose publicly. “;You spend more time on vacation in Monaco,”; he said. “;Who goes to Monaco? The rich, the famous.”;

The candidates disagreed on a host of other issues: Adams said he supported the recent decision to remove a statue of Thomas Jefferson from the City Council chamber, while Sliwa said “;absolutely not.”;

Sliwa, who has made animal rights a major part of his platform –; discussing the 15 rescue cats who share a studio apartment with him and his wife, and promising to open no-kill shelters –; said he would “;absolutely”; ban the “;barbaric”; horse-drawn carriage industry from Central Park. Adams, who won the support of the union representing the carriage drivers, did not take a clear position on the issue.

And they clashed over congestion pricing, the plan to charge drivers a fee to enter core areas of Manhattan. Adams backed the plan, with certain exemptions such as people entering the city for chemotherapy treatments.

“;We have to deal with congestion in our city, and it”;s costing businesses a large amount of money because we”;re failing to do so,”; he said. Sliwa, by contrast, said the plan would “;crush the middle class.”;

Adams has raised $2.4 million in donations since August, according to recent fundraising reports, bringing his balance to nearly $8 million. Sliwa raised $200,000 in the same period and has $1.2 million on hand after receiving public matching funds this fall.

The Democrat”;s financial advantage was on display Wednesday night: As soon as the debate ended, an Adams ad played on NBC.

Amanda Eisenberg and Myah Ward contributed to this report.