Farrah Abraham is in some legal trouble!

According to TMZ, the 30-year-old reality star got arrested on Saturday night for allegedly slapping a security guard at the club and restaurant Grandmaster Recorders in Hollywood after partying there with a friend. An eyewitness told the outlet that another patron first assaulted Farrah, who then became belligerent and refused to leave the club when asked. While police officers were not called to the scene at first, someone made a citizen’s arrest, and the paramedics soon came. The EMTs ended up calling for backup at one point, and Farrah was soon taken into custody.

In a video obtained by TMZ, a man wearing a black top and blue jeans can be seen restraining her while the Teen Mom alum was on the sidewalk, yelling:

“I don’t understand why there’s cuffs being put on me. I did not hit anyone. On camera, I did not – I would never hit anyone.”

You can see the video HERE. E! News reports that she was booked on a charge of misdemeanor assault by the Los Angeles Police Department and released from custody around two hours later. She has been scheduled to appear in court in May. No injuries were reported.

Following the incident, Farrah spoke out about what went down in a series of Instagram Stories on Sunday. The television personality first wrote:

“I will never understand sexism & sexist hatred. To all the men who wish me wrong I give it to the 1 who created us all. I CARE FOR MEN & WOMAN EVERY DAY EQUALLY.”

She then included footage recorded during the arrest, which showed her lying on the ground with her hands behind her back:

“Why is a male on top of me holding me down when I was walking. This is scary and he should be fired and in jail for [battery]. I’m tired of people harassing me, holding me down, hurting me and [lying] about me … it’s scary, it [affects] mothers, it is traumatizing and I’m hurt.”

The mom claimed to have been injured from the altercation, showing pictures of her “bruised and beaten.” Take a look (below): 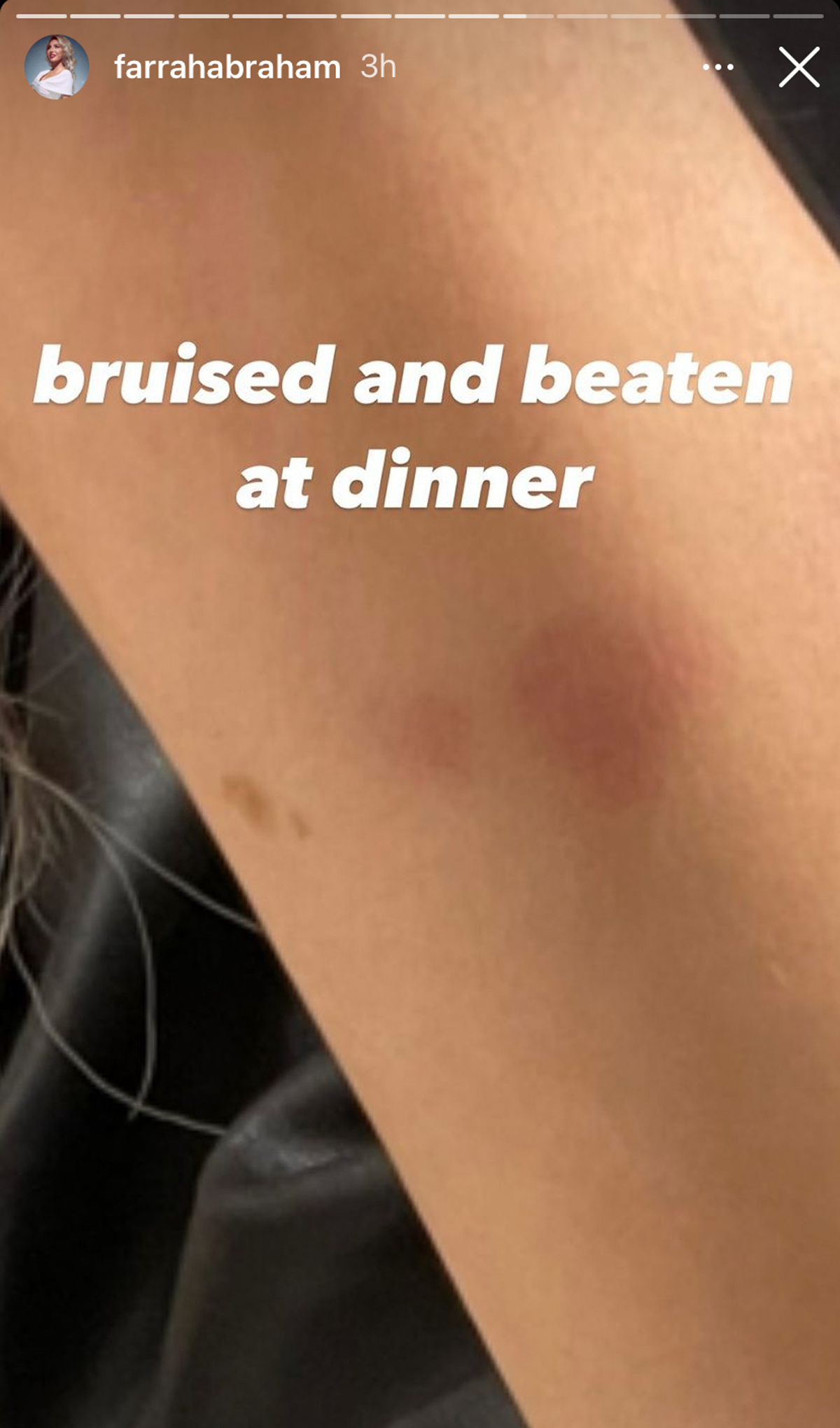 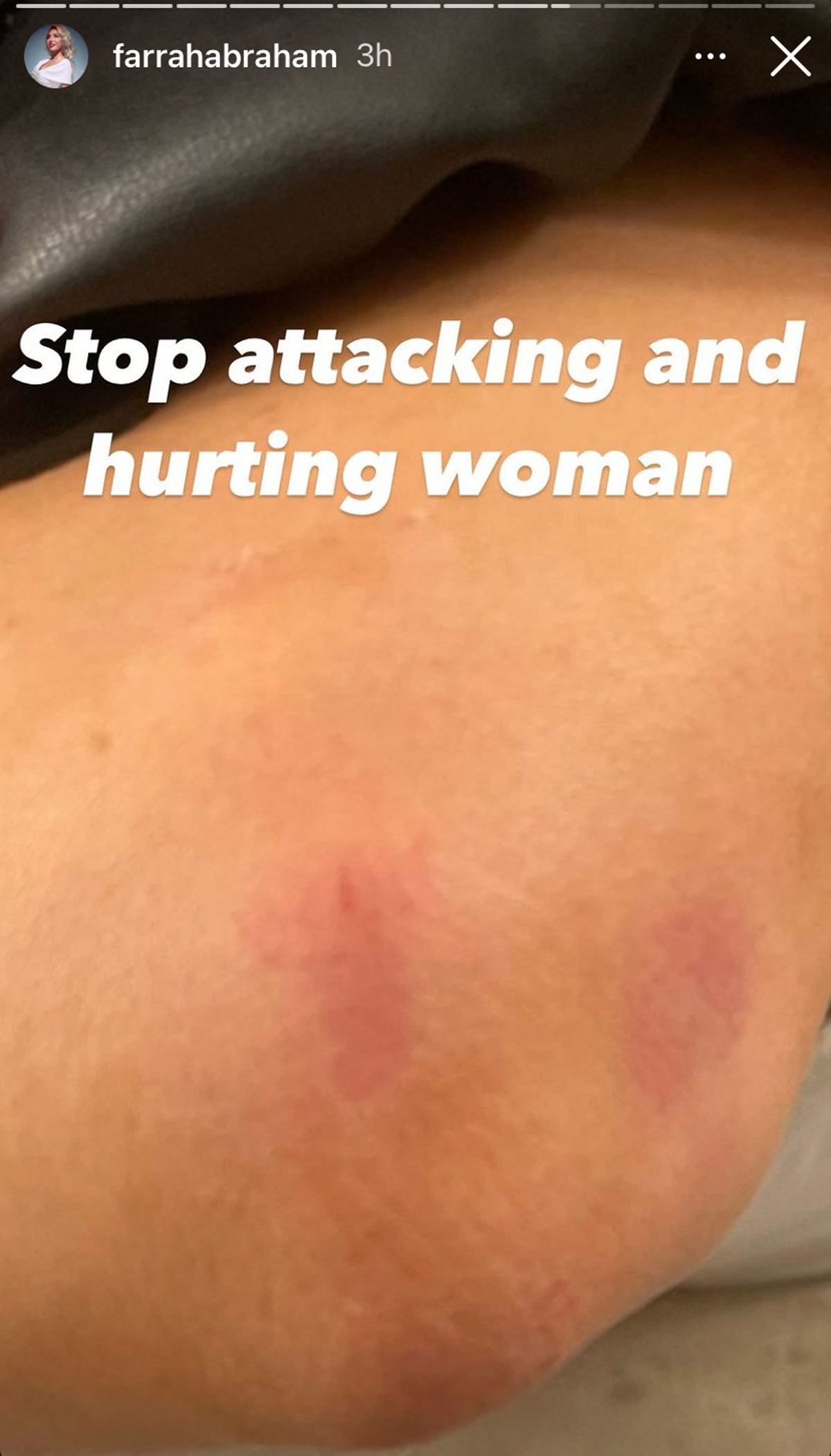 Later, Farrah opened up about her decision to share the details from the situation on the ‘gram, saying:

“I post this as no woman or man should ever be battered, abused, conspired, ganged up on, set up, recorded, and video sold.”

The 16 and Pregnant star then alleged that she’s “putting a restraining order” on the man who “made this dinner reservation and conspired an attack on myself with the staff at @grandmaster_recorders as it was a ‘private persons arrest’ complete setup,” adding:

“I’ve had a very traumatizing year and I don’t deserve to be attacked, bruised, men on me, and battered. As a single mother to be harassed, battered, and conspired against as a paying customer @grandmaster_recorders should fire their management, and security for all contributing to attacking 1 person out of 3 people. I thank the HOLLYWOOD police for rescuing myself from being held against my will and being attacked, I NEEDED HELP- I couldn’t even use my phone.”

“I’m blessed to go to church today. I realize it’s no longer safe for woman to go out to eat in their own neighborhoods. I look forward to my law degree and I look forward to court. Justice will be served as always. Woman it is a scary unsafe world we live in, act upon your rights and always care for others even when everyone hurts you and attacks you. You are resilient and you are stronger then all of the weak people out there who hurt and traumatize us.”

This is not the first time that Farrah has been in legal trouble. She was previously arrested for battery in 2018 after allegedly assaulting an employee at the Beverly Hills Hotel.