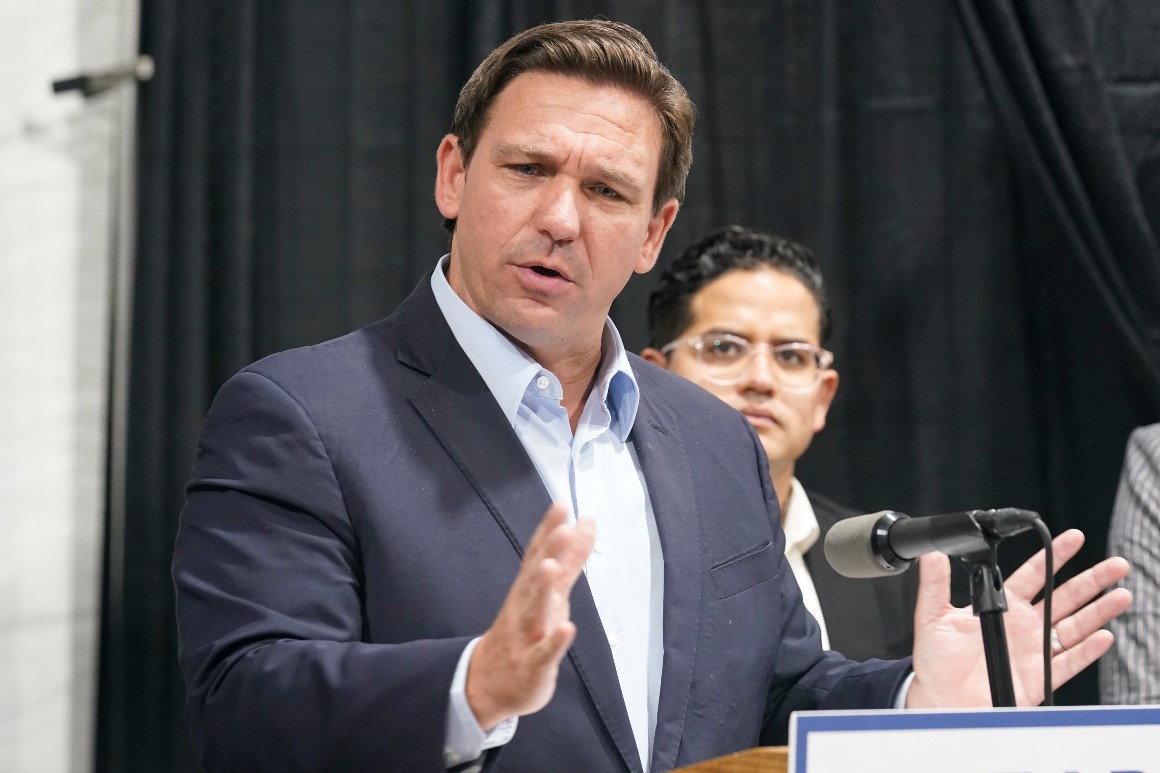 TALLAHASSEE –; Florida Gov. Ron DeSantis has been untouchable for the past year as he commanded the Republican culture wars to become heir apparent to Donald Trump. The latest coronavirus surge is starting to change that.

Covid infection rates continue to climb as the state faces shortages of health care staff, morgue space and even oxygen for patients. About 16,000 people are hospitalized. Child infection rates have shot up. School districts –; even in Republican strongholds –; have rebelled against DeSantis”; anti-mask mandates. And cruise lines are resisting DeSantis”; vaccine passport ban. Even his recent poll numbers are slipping.

It”;s new terrain for a Republican governor who defied dire expectation during the first wave of Covid-19 but has continued his hands-off approach as the more contagious Delta variant infects large swaths of Florida”;s unvaccinated population.

The most recent defeat came Friday when Leon County Circuit Court Judge John Cooper ruled DeSantis can”;t punish school districts for passing mask mandates, as his administration had threatened after instituting emergency rules aimed at banning mask mandates in schools. The DeSantis administration has said those districts are breaking the law, an assertion directly refuted in a blistering ruling from Cooper read from the bench during a nearly two hour hearing.

The multi-front Covid-19 battle is becoming inextricably linked to DeSantis”; 2022 re-election bid, and more broadly his future White House aspirations. The governor remains popular with conservatives across the country and in Florida, but his steadfast refusal to implement Covid-related restrictions amid hundreds of virus-related deaths in the state and rising infection numbers has the potential to threaten his electability.

“;There”;s no question it”;s impacting him politically,”; said a Republican consultant who has previously worked with DeSantis and requested anonymity to speak freely. “;You can tout all the freedom and anti-lockdown that you want. There”;s no political strategy for sick kids and tired parents.”;

A Quinnipiac University poll released this month had DeSantis”; approval rating dipping below 50 percent, with 47 percent approving of his job performance, and 45 percent disapproving. Those numbers dropped to 44-51 when asked about his handling of public schools. The Quinnipiac poll follows other public polling that shows a similar erosion to DeSantis”; approval rating. A St. Pete Polls survey earlier this month showed 43 percent approved of the job he was doing while 48 percent did not.

The poll also brought bad news for President Joe Biden, who is the frequent target of criticism from DeSantis. Biden”;s approval rating sits at 40 percent in Florida, while 53 percent disapprove of his job performance. The poll was conducted between Aug. 17 and 21, a time when Biden was facing heavy criticism over his withdrawal from Afghanistan, an issue that has kept the national news cycle from focusing on DeSantis and Florida”;s Covid-19 situation.

Yet DeSantis has focused in recent weeks on traversing the state to tout new sites that deliver the monoclonal antibody treatment. The treatment can reduce the likelihood that a Covid-19 patient lands in the hospital if it is given shortly after infection. But it is far less effective than vaccines at preventing severe illness and death. The state has so far opened up 21 of the sites and the conservative media outlet One America News Network will air a 2-day series on the treatments with the title “;America’s Governor & Florida’s Grit: How Antibody Therapy Combats COVID-19.”;

“;We think the thing that has the most impact to keep people out of the hospital and save lives is to really make sure this early treatment is something people have access to,”; DeSantis told reporters Thursday. “;Even with a massive number of people vaccinated, you still have prevalence.”;

His fight with schools over masking children, however has also escalated. Already, 10 school districts have bucked the governor over his order banning schools from implementing mask mandates, including Sarasota County and Indian River County school districts, which are in conservative-leaning regions of the state.

But Cooper, the judge who ruled against DeSantis Friday, opened the door for more local defiance. Cooper not only ruled against the administration, but said that previous legislation DeSantis-championed known as the “;Parents Bill of Rights”; actually allows districts to craft their own mask policies.

“;A school district, adopting a policy, such as a mask mandate, is acting within its discretion it has been given by the Florida Legislature in the Parents Bill of Rights,”; Cooper said. “;"The doctrine of separation of powers requires that the discretionary power exercised by the school board, cannot be interfered by the judiciary, or by the executive branch of government.”;

“;It”;s not surprising that Judge Cooper would rule against parent”;s rights and their ability to make the best educational and medical decisions for their family, but instead rule in favor of elected politicians,”; she said. “;This ruling was made with incoherent justifications, not based on science and facts.”;

Infection rates for kids under 12, who are not yet eligible for the vaccine, last week increased to 23 percent, up from an average of 15 percent since March 1. Nearly 17,000 Covid-19 patients are in hospitals, far above the 2020 peak. And Florida”;s nearly 1,500 deaths reported last week was by far the biggest single seven-day increase since the state started reporting Covid-19 data.

DeSantis’ losses over Covid-19 policy have not been confined to land.

Disney, one of Florida”;s largest Republican donors, this week joined Carnival, Norwegian and Royal Caribbean in requiring vaccines for passengers older than 12. The wave of cruise operators requiring vaccines was, in part, prompted by vaccination requirements for cruise passengers put in place by the government of the Bahamas, which is the first stop for most major cruise ships. It”;s a direct violation of DeSantis-pressed legislation that bars vaccine passports as well as guidance from the federal government over cruise ship safety.

Earlier this month, a federal judge in Miami blocked Florida from enforcing the law against Norwegian Cruise Line Holdings, a ruling that gave cover for other industry operators –; like Disney –; to go against DeSantis”; wishes on vaccine passports. Attorneys for DeSantis plan to appeal the decision.

DeSantis has continued to use the pandemic to help what has been a well-oiled political fundraising machine. Most recently, the governor”;s political committee sent a fundraising email based on a feud he had with the Associated Press, which published a story implying DeSantis was boosting monoclonal antibody treatments to help a political donor.

That story was met with a blistering response from DeSantis press secretary Christina Pushaw, whose attack on the reporter who wrote the story landed her a 12 hour Twitter suspension and prompted the wire service to send a letter to DeSantis asking his office to stop “;bullying”; reporters. The governor”;s political rivals are also keying in on the pandemic, with Rep. Charlie Crist and Agriculture Commissioner Nikki Fried, DeSantis”; top 2022 Democratic rivals, turning their focus to the administration”;s response.

“;Governor DeSantis has made it clear that he wants to put politics over keeping schools open and keeping our economy strong,”; Crist”;s campaign said in an email. “;But today”;s ruling makes clear that he”;s overstepped his authority.”;