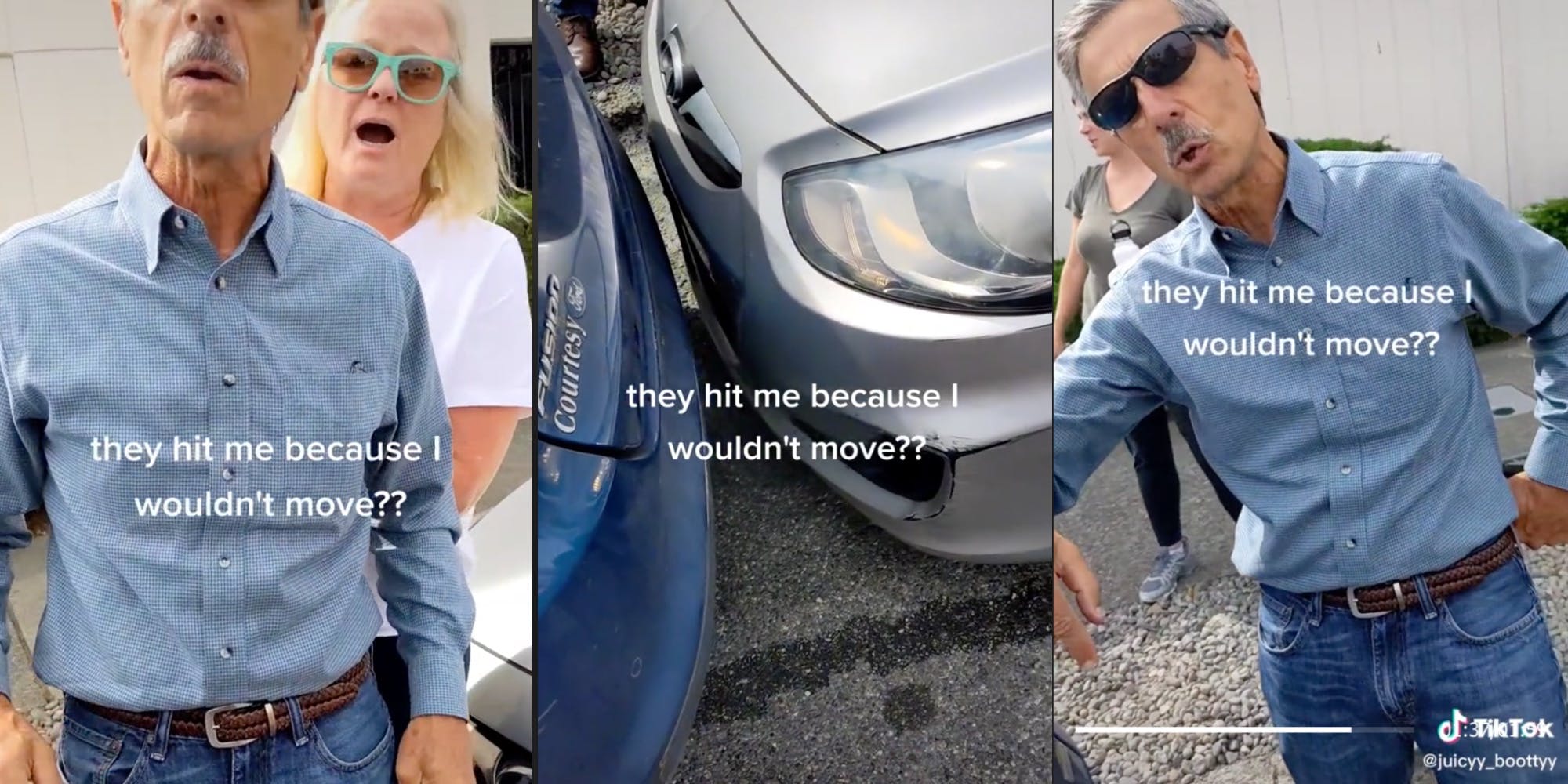 A recent TikTok that shows a man hitting a woman’s parked car in order to get her to move out of his way has gone viral.

ever just been sitting in your parked car and had someone hit you to make you move so they can park behind you? no? Just me? in Tacoma, WA. DM if you know who these awful people are.

TikToker Shelby Gale (@juicyy_boottyy) filmed the incident and subsequent argument which took place in Tacoma, Washington, and posted it on Friday. The video now has over 257,600 views and 2,533 comments.

The video shows a silver sedan’s front bumper touching the woman’s blue Ford Fusion’s back bumper. “Why is it OK to hit my vehicle to get me to move?” she asks as the silver car backs away from her car.

Both cars are lined up along curbside parking on the street. According to the unfolding conversation between Gale and several people that appear to have been in the silver car during the incident, the driver of the silver car wanted the parking space that Gale was in. When Gale wouldn’t pull forward to make space for the silver car, the driver allegedly hit her back bumper to get her to move.

Gale then got out of her car to film the scene and proceeded to get into an argument with a man who is a passenger of the silver car. Another man can be seen in the driver’s seat of the silver car, as well as two other women in or around the vehicle.

“I’m not obligated to move,” Gale says as the man tries to explain how it is acceptable to hit her car because she refused to move it.

“Nobody’s obligated to do a nice thing,” he says. He then asks why she is punishing the driver for bumping her car.

“And you’re not obligated to hit my car because I won’t move out of your way. He hit my vehicle, sir. That’s not me punishing anybody… You don’t get to play bumper cars to get what you want.”

The man keeps asking why she won’t move so that the other man can park his car.

“That’s not the point…” she says. “In what universe is that an acceptable response? You just shove people out of your way when you’re waiting in line and they won’t move?”

“We’re waiting for you to move,” he says, not seeming to understand what she’s saying.

“Why?” she asks again, pointing out that there is a whole street for them to park on instead of hitting her car.

He continues to argue that she could just move her car two feet and they could park. Again she reiterates that isn’t the point.

“There’s other places to park,” she reiterates. “You do not get to hit my vehicle with your car.”

A woman in the car interrupts, saying, “We didn’t hit your car.”

“Ma’am you moved me twice; I have a dash cam, I have it recorded back here. I saw you hit my car and the vehicle moved.”

They tell her she is “full of shit” and say nothing happened to her car. Again, she says that’s not the point. After a few more moments of sarcasm and arguing, the people associated with the silver car get back in the car and the video cuts off.

Many people in the comment section said the incident could classify as a hit-and-run since she has video evidence and they did not exchange information or call the police and wait for them to arrive.

“You have their license plate you have it on video are you going to report it?” asked @roseschneider.

“Done and done ✅,” Gale responded. She also confirms that a hit-and-run was filed in a later comment.

Others commented on the disrespectful attitude and actions the people in the silver car displayed.

“The sad part is everyone in that car thinks ramming someone’s car because they aren’t doing what they want is acceptable,” wrote @alicialashon.

“These people are wayyyyy too entitled oh hell no 💀,” said @nicoleilease.

One person seemed to side with neither party.

“Question is, could you have moved a bit to make way for him to park? If so, then it’s just common courtesy at this point. You’re both wrong,” commented @yuri.riverbear.

“Nah. He can just park somewhere else,” responded @candrada9212.

The Daily Dot reached out to Gale for comment via TikTok.

The post ‘In what universe is that an acceptable response?’: Male Karen argues that it’s OK to hit TikToker’s car to get her to move appeared first on The Daily Dot.