If you have followed the Qronicles of QAnon you might be aware of a man named Vincent (Vince) Fusca. He”;s the guy in the picture above. Fusca has been a MAGA fan who shows up at MAGA rallies and supports MAGA causes–;and by extension, the QAnon world–;for a few years now.

Something–;maybe his cartoonish hobo stylings or solid bone structure?–;has led many in the QAnon world to believe he is actually John F. Kennedy Jr. Yes, the son of former President John F. Kennedy. Yes, the same JFK Jr. who tragically died, along with his wife Carolyn Bessette Kennedy and her sister Lauren Bessette in July of 1999, when a small aircraft he was piloting crashed into the Atlantic Ocean near Martha”;s Vineyard in Massachusetts.

Pittsburgh”;s NPR news station WESA reports that Mr. Fusca has decided to cash in some of his QAnon celebrity to run for Senate in the Keystone State. The news outlet caught up with Fusca while he worked on getting the signatures needed to grift a bunch of money get on the ballot. “;I threw my hat in the ring because there’s too much happening in our nation right now that isn’t right: our border, our crime going up, our educational system falling apart.”; The good news is, if you weren”;t sure whether or not Mr. Fusca wasn”;t a straight-up charlatan piece of three-week-old-egg-salad-sandwich left on a beach in August, he had this to say when asked if he was actually John F. Kennedy Jr.: “;We’re going to leave that for another time, because right now it’s about getting the signatures for us to get there. We can go in so many different directions with JFK Jr. and other movements. But let’s stick to the matter at hand right now.”; 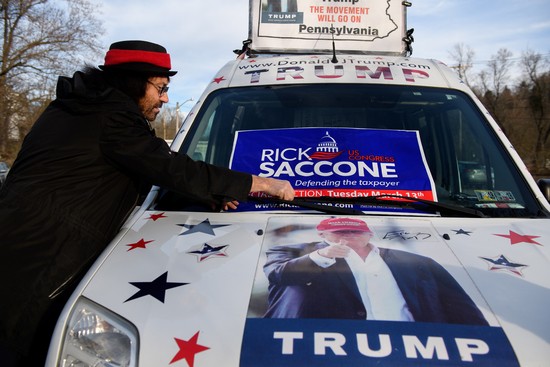 Pennsylvania is one of the many borderline-MAGA states filled with GOP operatives who should probably be facing criminal inquiries. There was Donald Trump”;s choice for Senate, Sean Parnell, who had to drop out after his estranged wife testified during a custody hearing that Parnell was a violent domestic abuser. There”;s COVID-19 super-spreader, state Sen. Doug Mastriano, who participated in the Jan. 6 festivities and has had to face calls for his resignation and an investigation for his part of the attempted coup d”;etat. And how can we forget Republican Rep. Guy Reschenthaler, who tried to overturn our democratically decided election and recently attempted to explain to Americans how a sociopath can reconcile hundreds of childrens”; deaths to COVID-19 in the pursuit of one”;s own political aspirations?

Some of the QAnon folks believe JFK Jr. faked his own death. A subset of those folks believes that, finally, after 23 years in hiding, JFK Jr. has decided to reveal himself to the world–;as Donald Trump”;s 2024 running mate. That sect of QAnoners went down to Dallas a few months ago and haven”;t left. In fact, even after JFK and his son failed to show up, they have remained.

There are others who don”;t go in for all that cult business. For them, all you need to know is that Michael Jackson, Princess Diana, and JFK Jr. are living on a secret island, where they spend their afterlives fighting against the deep state and pedophilia. True story.

This woman at the Trump rally believes this current version of Joe Biden is “;fake,”; and “;the real Biden was assassinated at Gitmo in 2019.”; She also believes Michael Jackson, JFK, Jr., and Princess Diana will be at Trump”;s upcoming inauguration because he helped them “;escape.”; pic.twitter.com/hfpXhMp6M9

So now we have Fusca, a guy who spends his time maintaining a ludicrous after-five-o”;clock shadow and allowing people to believe that he may be a resurrected dead person in the flesh. WESA reports that during a rally on Saturday, Fusca wore a “;T-shirt advertising George magazine, a now-defunct political and lifestyle monthly that the younger Kennedy founded in the 1990s.”;

But don”;t you worry! Most of the people who were at this Saturday event don”;t actually believe that the decades-deceased son of a former president is alive and named Vince Fusca.

Christine Ree and her husband Robert are working on this campaign. They said that, while they know Fusca isn”;t JFK Jr., they do understand why some people have bought into the lie (and the only reason this guy is actually running for office). Ree said, “;Vince is not JFK Jr. Not at all.“; That sounds extremely reasonable! But wait, there”;s more:

“;I don’t believe things I see with my own eyes now. … [Y]ou see enough things. You give enough time. You let enough truth come out….; I believe in people doing research and finding the truth.”;

You see, if nothing is real, then anything can be real.

Possibly unrelated note: “;Fusca has yet to articulate a policy platform.”; U-S-A!