This article is part of the The DC Brief, TIME”;s politics newsletter. Sign up here to get stories like this sent to your inbox every weekday.

John Murtha made history in 1974, arriving in Washington as the first combat veteran of the Vietnam War to win a seat in Congress.

Saigon fell within months of his arrival at the Capitol, but Murtha for the next three decades remained one of the Democratic Party”;s most hawkish members and leading voice for a strong military long after he placed his honors, including two Purple Hearts, in jewel cases. When Murtha spoke on matters of defense–;especially about mistakes made in Vietnam–;his colleagues listened to the former Marine Corp drill instructor. Murtha was the first, but he wasn”;t the last: normalized relations between Washington and Hanoi in the 1990s came only with the encouragement of another pair of Vietnam veteran lawmakers, Sens. John McCain and John Kerry.
[time-brightcove not-tgx=”true”]

In a building full of self-proclaimed experts with puffed up chests, it turns out that when those chests carry war medals, they count for just a little bit more at the Capitol. Which is why the veterans of the ongoing–;and fast-collapsing–;war in Afghanistan and the broader-but-connected global war on terror were in high demand in recent days for advice about what should happen next. 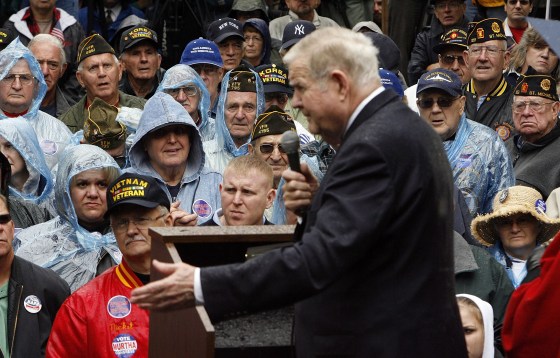 Chip Somodevilla–;Getty ImagesAll eyes are on Rep. John Murtha (D-PA) as he addresses voters and veterans during a campaign rally in Johnstown, Pa., on Sept. 30, 2006. Murtha was the first Vietnam combat veteran elected to Congress in 1974.

The current Congress counts 91 veterans among its ranks. The number is the lowest since at least World War II, according to The Military Times”; count. Back when Murtha first got to (a very male-driven and draft-era) Congress, roughly three-quarters of all members had some time in the service. Now, it”;s almost a novelty. Put another way, Murtha”;s Congress was more than four-times as heavy with veterans.

Nevertheless, on Zoom calls and one-on-one conversations in recent days, it quickly became apparent just how conflicted those veteran lawmakers were with President Joe Biden”;s decision to stick with the plan to leave America”;s almost-20-year war in Afghanistan and watch as the Taliban–;the Islamist militant group that harbored the 9/11 planners–;reclaimed control of the country. Of the 91 veterans in Congress right now, 51 have served in this century, meaning they have known the post-9/11 meaning of sacrifice. They are the modern versions of Murtha, a veteran of a contemporary conflict whose counsel may trump any whitepaper being bandied about from the think tanks downtown.

Talk to any of these veteran-legislators this week–;regardless of party or if they served outside of Afghanistan–;and they are stung and not in a mood to spare Biden criticism. Instead, they want action immediately to protect Afghans who helped the U.S. mission over the last two decades, the folks like translators and drivers who knew the local terrain. They also hint that a reckoning on what went wrong with the withdrawal will come for Biden.

“;The number of options that we have at this point are extremely limited,”; said Rep. Jason Crow, a former Army Ranger who led a briefing yesterday with former Secretary of State Madeleine Albright and former Rep. Jim Kolbe, two senior voices in foreign policy circles from opposing parties. “;Send in the combat power and the troops that are necessary to secure that airport and keep it open as long as we possibly can. We have the means. We have the ability. We are the United States of America,”; said Crow, a Colorado Democrat. “;We can do this and we can get thousands and thousands of people out, but we must have the will.”;

The alternative, veteran-lawmakers said, was unthinkable. 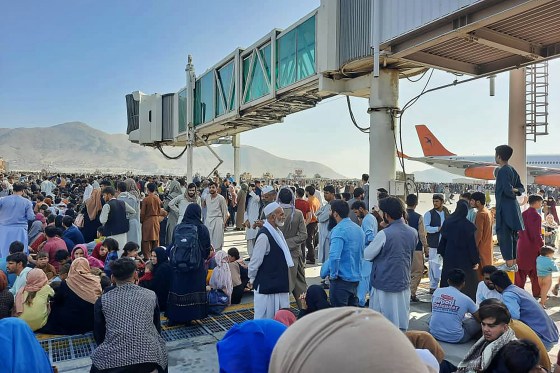 AFP/Getty ImagesAfghans fleeing the Taliban’s arrival in Kabul crowd the tarmac of the airport on Aug. 16, 2021.

“;The State Department cannot be in the position of giving people a death sentence over typos and the wrong form on the very documentation that people need to prove that they stood with us, documentation that will get them killed if found in their home or found at a Taliban checkpoint,”; said Rep. Michael Waltz, a Florida Republican and the first Green Beret elected to Congress. “;I’ve personally had that happen to one of my own interpreters who was not just executed; he was taken back to his home and beheaded in front of his family and alongside his brothers and cousins. That’s the brutality that we’re dealing with and what’s at stake.”;

It”;s a tragedy that it took the collapse of Afghanistan after 20 years of American efforts to bring Washington to a place of comity. But it”;s been a pattern seen for decades: those who wore the uniform can often set aside their partisan differences at moments of crisis. There”;s just something in their training that carries over long after drills are put on hold.

It isn”;t just veterans currently serving Congress wading into the debate. While it”;s highly unlikely that next year”;s midterm elections will hinge on this issue alone, veterans running for political office in both parties were also quick to cram themselves into the conversation. After all, given Americans”; fleeting interest in foreign policy when it comes to the ballot box, this may be their best chance to grab focus.

In Pennsylvania”;s crowded race for the open Senate seat currently held by Republican Pat Toomey, retired Army Captain Sean Parnell went up with a television ad full of images of him in uniform during his 485 days fighting on the Afghan-Pakistani border. “;They called us the Outlaw Platoon, men of every race, creed and religion,”; the Republican says in the 30-second ad. “;Our differences were only skin deep and what we had in common, our love and brotherhood. It made us unstoppable. When Americans are united in purpose, we can accomplish anything.”;

And in Missouri, Democratic candidate Lucas Kunce spent his Monday packed with interviews, trying to promote his message that this outcome was inevitable and officials in Washington have been lying about it for years to keep power for themselves. Having twice deployed to Afghanistan and having overseen about 6,000 Afghan forces in the western region of the country, the weekend”;s deterioration was unsurprising to the retired Marine seeking the nomination in an open Senate seat being vacated by retiring Republican Roy Blunt.

“;What we’re seeing right now with the country falling is exactly what we saw over and over again with smaller units in Afghanistan. When the United States wasn’t doing the work, the units would fall,”; he said by phone yesterday. “;And so now that we’re not doing the work for the country, the country’s falling. It”;s just not a surprise.”;

America”;s long and costly war in Afghanistan may be careening toward its sheepish end but there”;s no way that country–;especially now that it”;s under Taliban control–;will be far from the policy discussion here in Washington. There are good odds more veterans of the military fight will soon join the debate over a country they know all too well. Just as John Murtha infused the conversation for 36 years with the wisdom earned in Vietnam, folks like Crow and Waltz are trying to teach the hard-fought lessons of Afghanistan in Washington. Parnell and Kunce may follow. And unlike the rest of the agenda, partisan fractures are hard to find–;at least at the moment of Afghanistan”;s collapse.

Make sense of what matters in Washington. Sign up for the daily D.C. Brief newsletter.