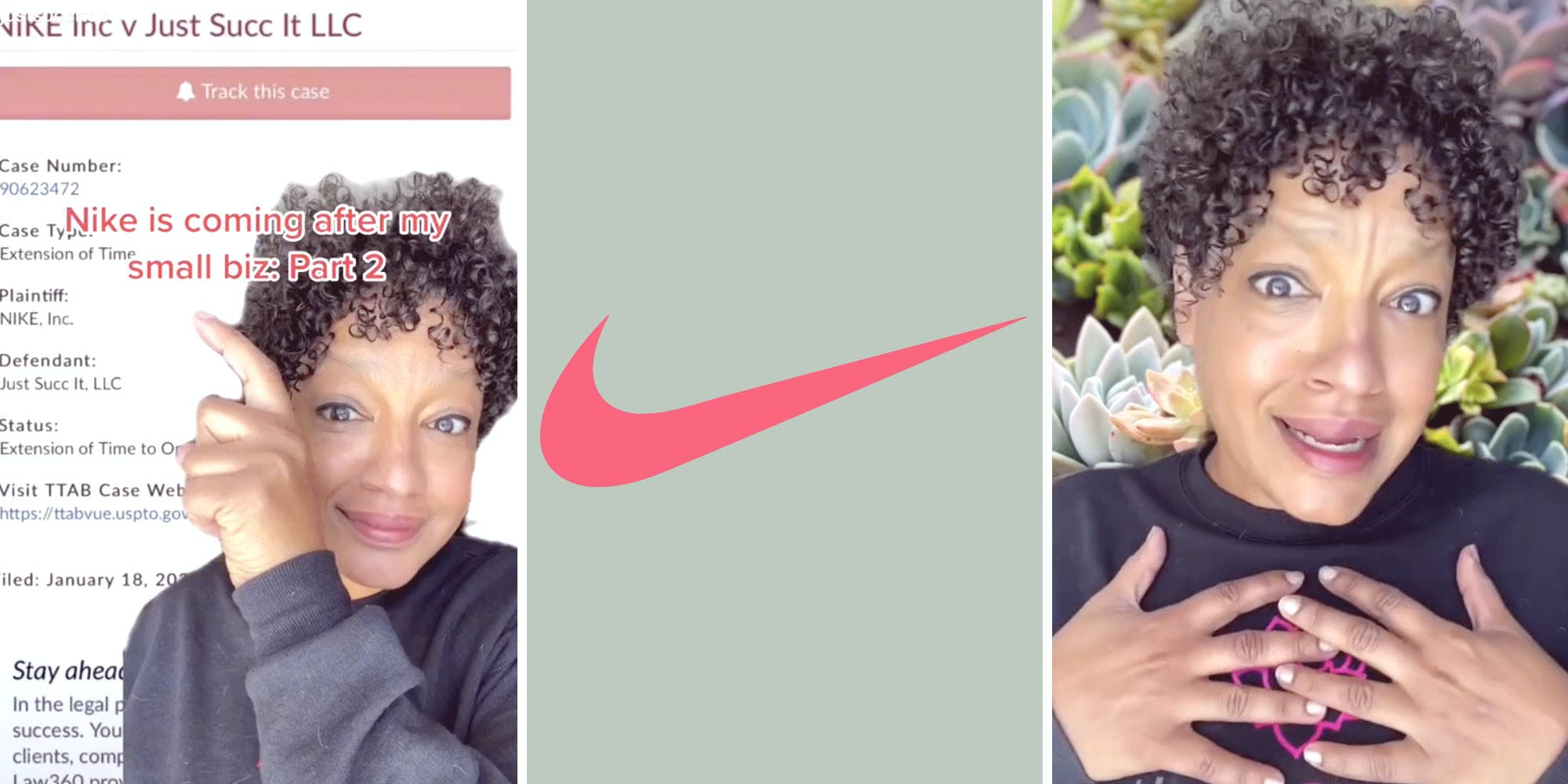 Andrea Galbreath, the owner of a California-based succulent business, says Nike is opposing the trademark she owns for her company, JustSuccIt. The shoe and athleticwear giant said it opposes her trademark because JustSuccIt could be “damaging to their brand,” according to a TikTok posted by Galbreath on Saturday.

“Nike is comin’ after me!” she says in the TikTok. “I’m just a small business in San Juan Capistrano, trying to plant happiness in the lives of others. So I’m doing my best to get ahead of this. Can you please help me tell Nike to leave me alone?”

Please help me to get Nike to leave my business name alone! I’m a small succulent gift business, and I certainly don’t have the resources to fight a huge corporation like NIKE. #smallbusiness #nike #stopit

Galbreath’s first TikTok on the situation was viewed almost 440,000 times by Monday times. Her next video got over 1.5 million views.

“Nobody’s gonna get online to order shoes and then accidentally order a succulent arrangement from me,” Galbreath says in her second TikTok about the trademark opposition.

Nike has triumphed over a handful of small businesses in recent years that have used plays on “just do it” in their marketing. Nike successfully opposed the trademarks for the slogans “Just Believe It” and “Just Drew It.” In April 2020, the Trademark Trial and Appeal Board officially recognized that “just do it” is a “famous trademark.”

“It is often best to stay away from creating any branding that includes, ‘JUST [INSERT WORD] IT,'” writes Darren Hunter of Above the Law, a legal news website. “Key considerations in any likelihood of confusion analysis are the similarities between the marks and the similarities between the goods and services, and the opposer,” which is Nike, in Galbreath’s case, “bears the burden of establishing that there is a likelihood of confusion.”

Galbreath told the Daily Dot that it was “mindblowing” to her that Nike even found her trademark, which was registered in the “plant category” of the U.S. Patent and Trademark Office.

The JustSuccIt owner started her business after making her Californian front yard drought-tolerate by planting succulents.

“I literally became obsessed with succulents because they are incredible,” she told the Daily Dot. She also learned that succulents adapt to dry, arid climates by retaining water through their shallow root systems. “And I thought, well, I better take a lesson from these succulents… and just adapt and see what happens with his business. And it turned into something.”

With regard to the name, she told the Daily Dot that she came up with JustSuccIt after a couple of glasses of wine.

“When you hear [JustSuccIt], you can’t decide if you’ve been offended or if you’re being invited to something,” she says in another TikTok about the trademark opposition.

But Galbreath is fearful of going up against a multi-million dollar corporation. When she first found out about the trademark opposition, she turned to social media as a resource for help.

“How does a small business protect itself from large corporations?” she said to the Daily Dot. “I really understand that Nike is doing what Nike does to protect their brand. And I have the right to do that myself, too.”

She said she’s overwhelmed and excited about the positive attention that her TikToks have gotten. Commenters on all three of her videos regarding Nike voiced their support for Galbreath, and some suggested new ways to use her business name to combat the corporation’s actions.

“After seeing this, I would rather accidentally have a succulent sent to me,” @nurse.a wrote.

Galbreath told the Daily Dot that she’s still waiting to hear more from Nike and is unsure of what will happen next.

“I do know that no matter what I’m going to adapt and try,” she said. “I’m going to do what I can to keep my business name and to keep using it.”

The Daily Dot reached out to Nike via email.

The post ‘Just succ it’: TikToker says Nike is trying to sue her over small business name appeared first on The Daily Dot.