Light and creamy, you only need five ingredients to make this no-bake layered pumpkin spice Jello Pie. A sweet twist to classic pumpkin pie, this recipe only takes 10 minutes of prep time.

No-bake recipes aren”;t just for hot summer months when you don”;t want to turn on the oven, they are also fantastic time-savers during the busy holiday season. If you are looking for an easy pie to make for Thanksgiving dinner, this is the one.

Triple layer pumpkin spice pie is a simple, no-bake pie with layers of smooth pumpkin pudding, a creamy pumpkin filling, and then a whipped topping. You can even make the pie a day ahead to give yourself more time.

Serve your layered pumpkin spice pie for Thanksgiving dessert or any other fall potluck or gathering. This no-bake pie tastes delicious with a homemade pumpkin spice latte. 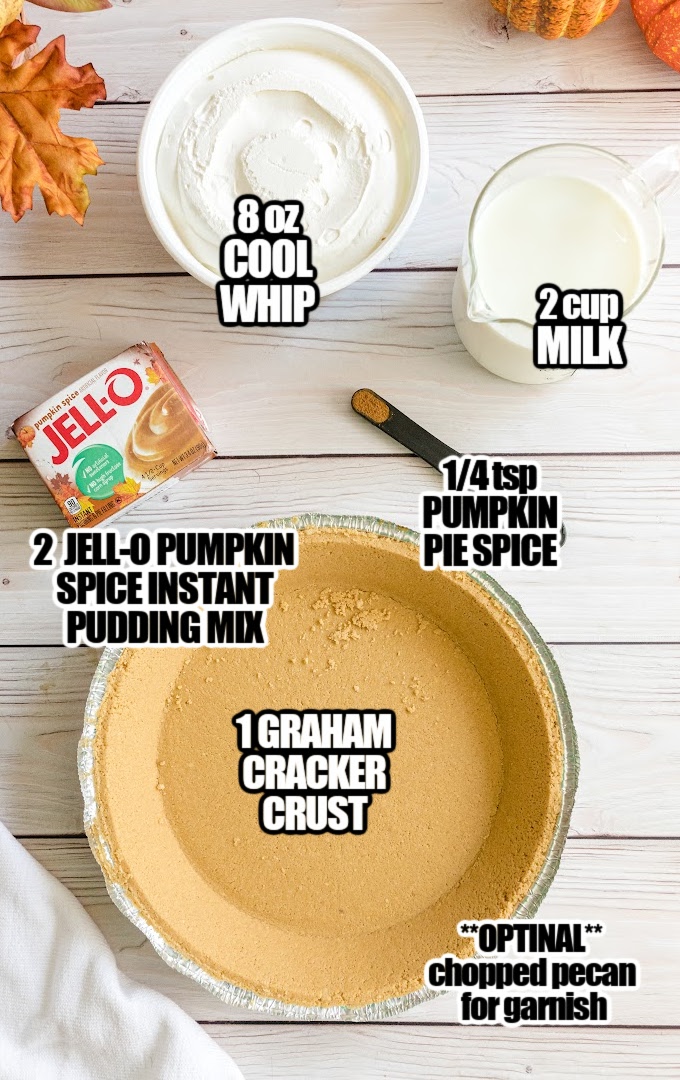 Chopped pecans are an optional ingredient that you can use as a garnish. Rather than simply chopping the pecans and sprinkling them on top, you could even caramelize your pecans in a skillet on the stovetop with brown sugar and water. It only takes a few minutes to cook the pecans and then you can let them cool before adding them to your pie topping.

If you can”;t find the pumpkin spice instant pudding mix at the store you can substitute a vanilla flavor and then add some extra pumpkin spice to your pudding. For a creamier pie instead of using whole milk use half and half cream. 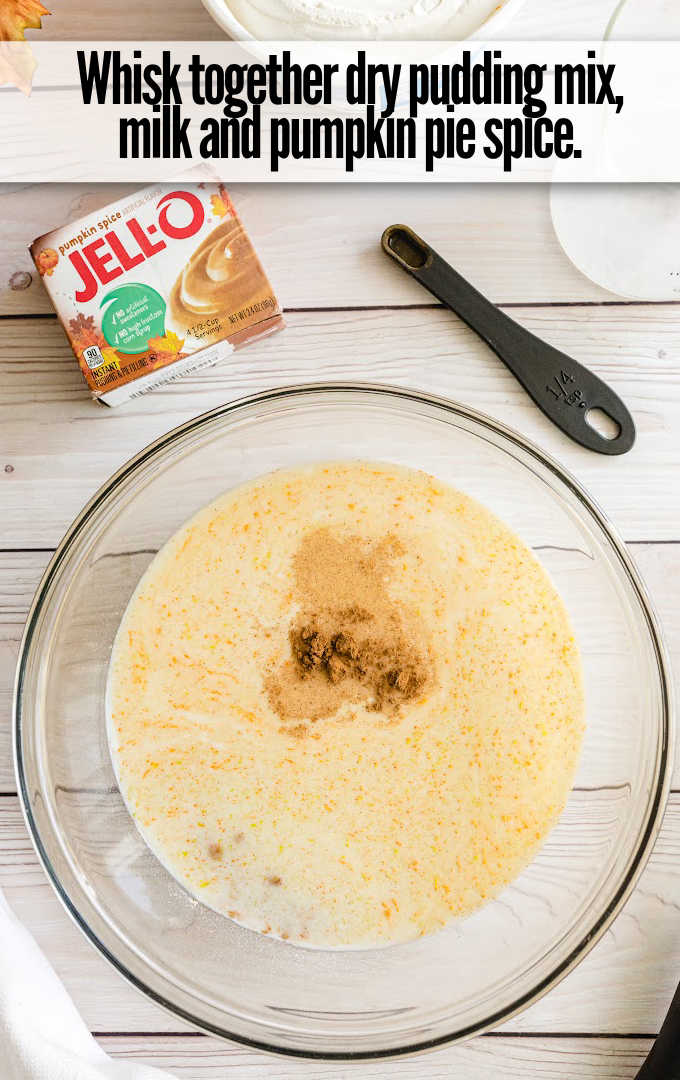 SECOND STEP: Spread ½ of the pumpkin pudding mix in the bottom of the graham cracker crust. 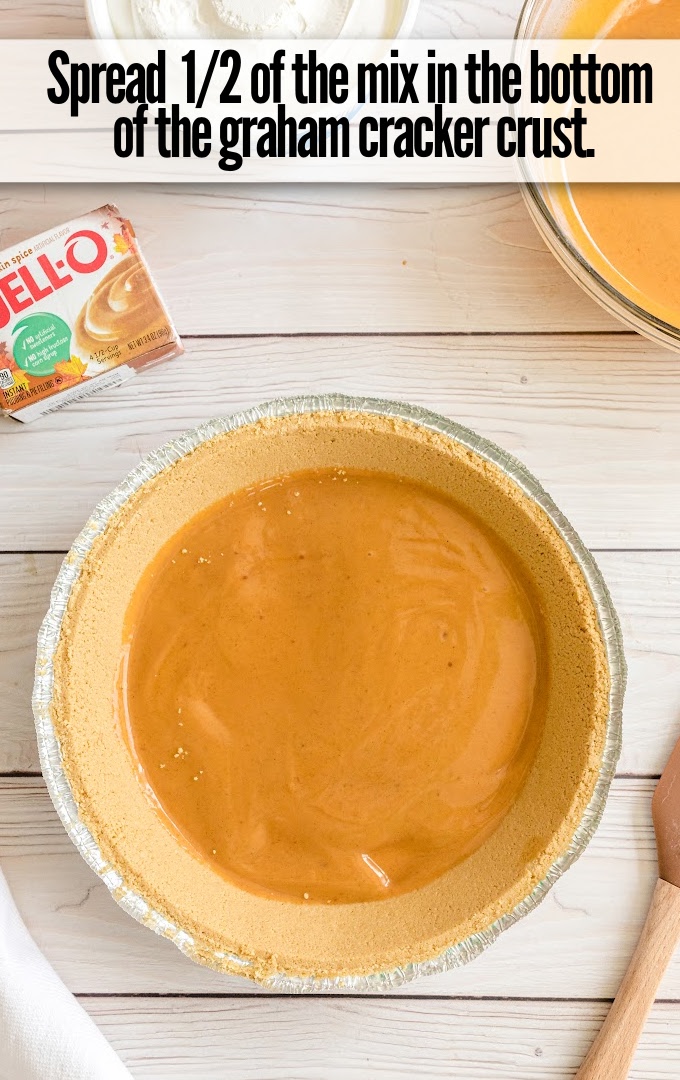 THIRD STEP: Add ½ of the Cool Whip to the remaining bowl with the pumpkin pudding. Stir together. 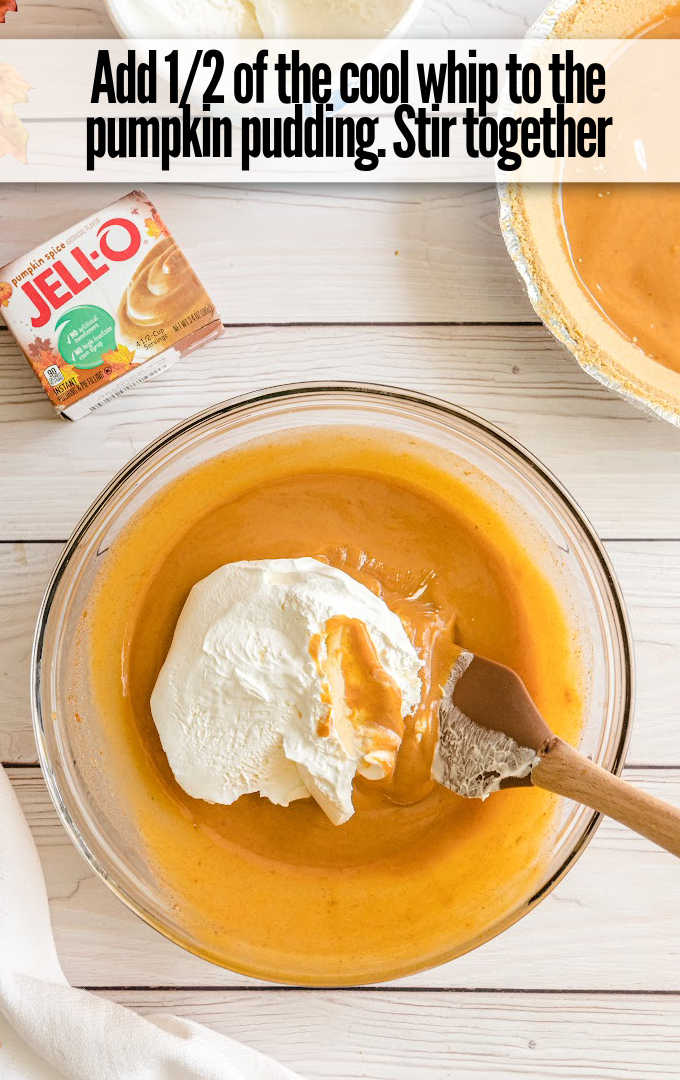 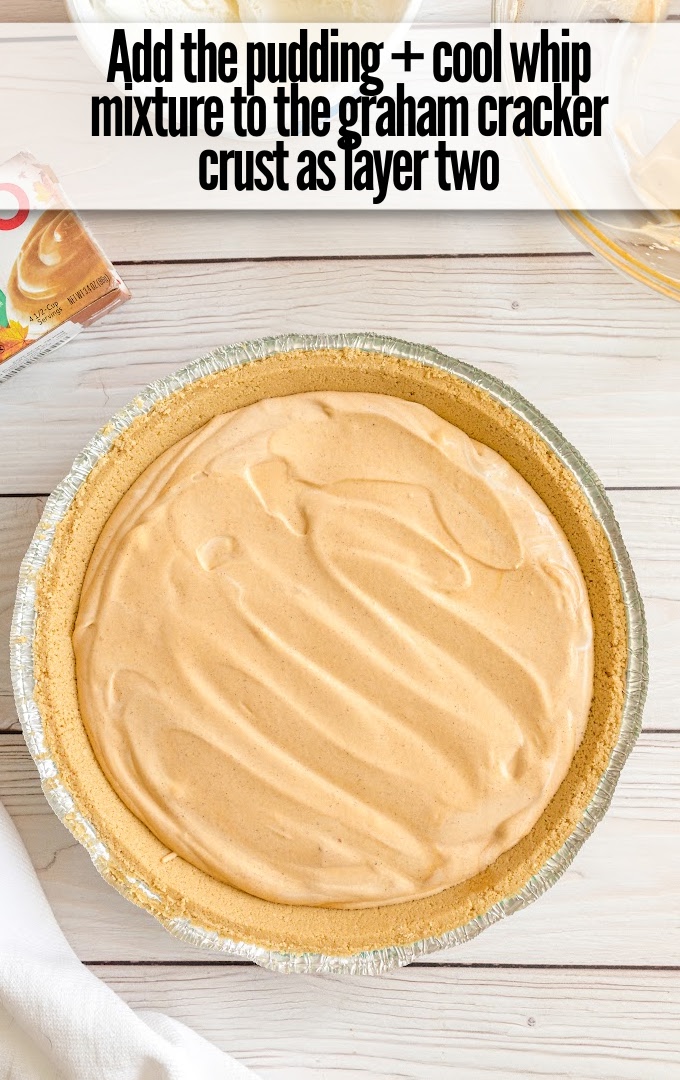 FIFTH STEP: Top the pie with the remaining cool whip as the third layer. 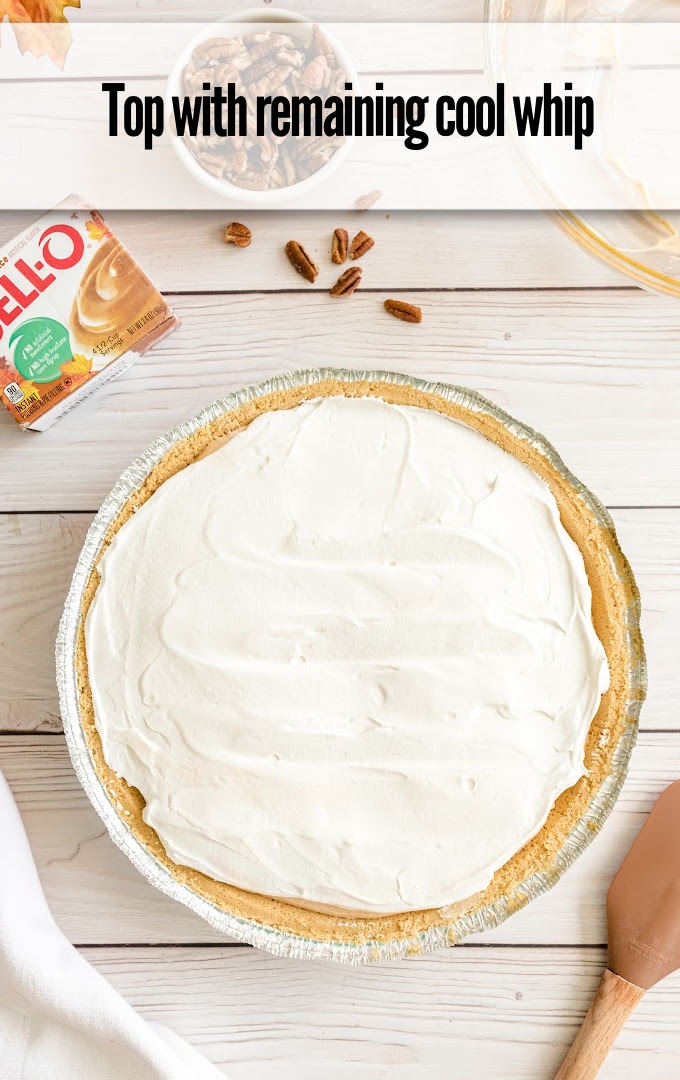 SIXTH STEP: Sprinkle chopped pecans over the top of the pie.

SEVENTH STEP: Cover and refrigerate for 4 to 6 hours or overnight for the best results. 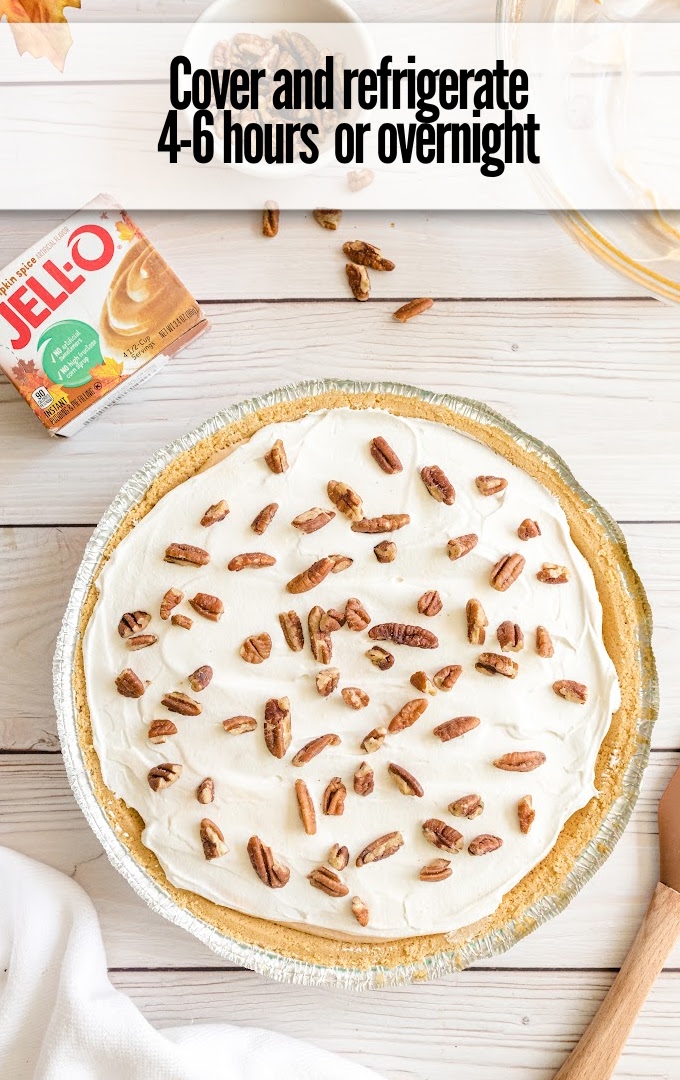 How do you make a homemade graham cracker crust? 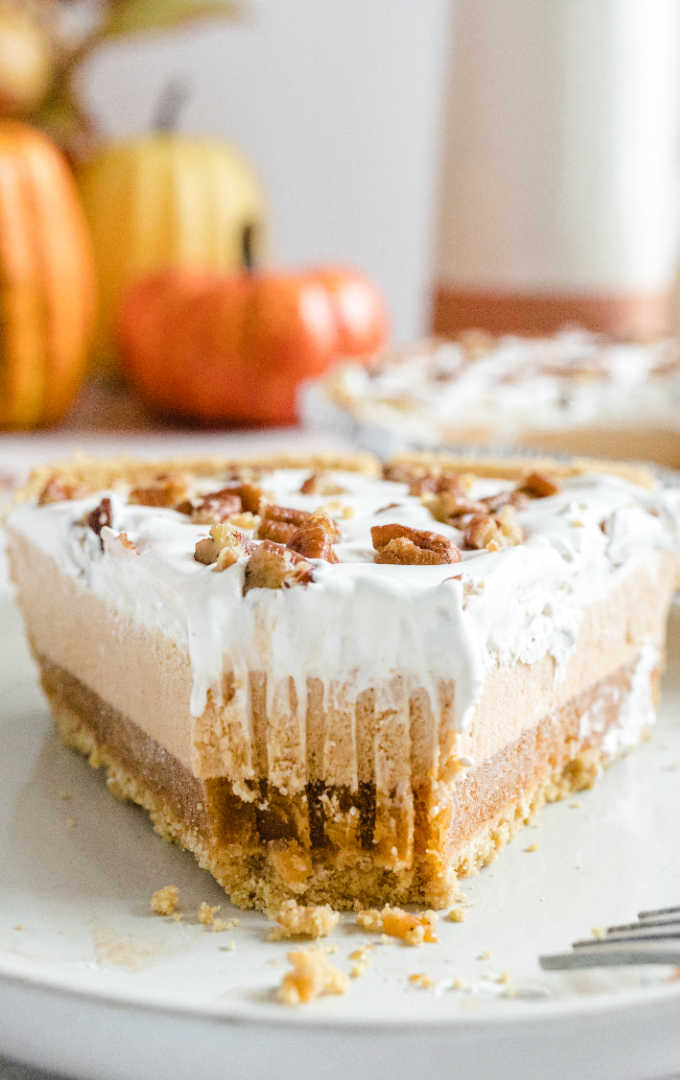 How long does the pumpkin pie need to chill?

You should try to refrigerate your pie for at least 4 to 6 hours, or overnight. However, if you don”;t have time to chill your pie, you could pop it into the freezer to speed up the process, just make sure not to let the pie freeze.

What topping can I put on my pie?

With a layer of whipped topping already on the pie, crunchy nuts make a delicious topping. Chopped pecans or caramelized pecans taste delicious with the pumpkin flavor. You could also drizzle caramel sauce or chocolate sauce on top or sprinkle a dusting of cinnamon sugar on top. 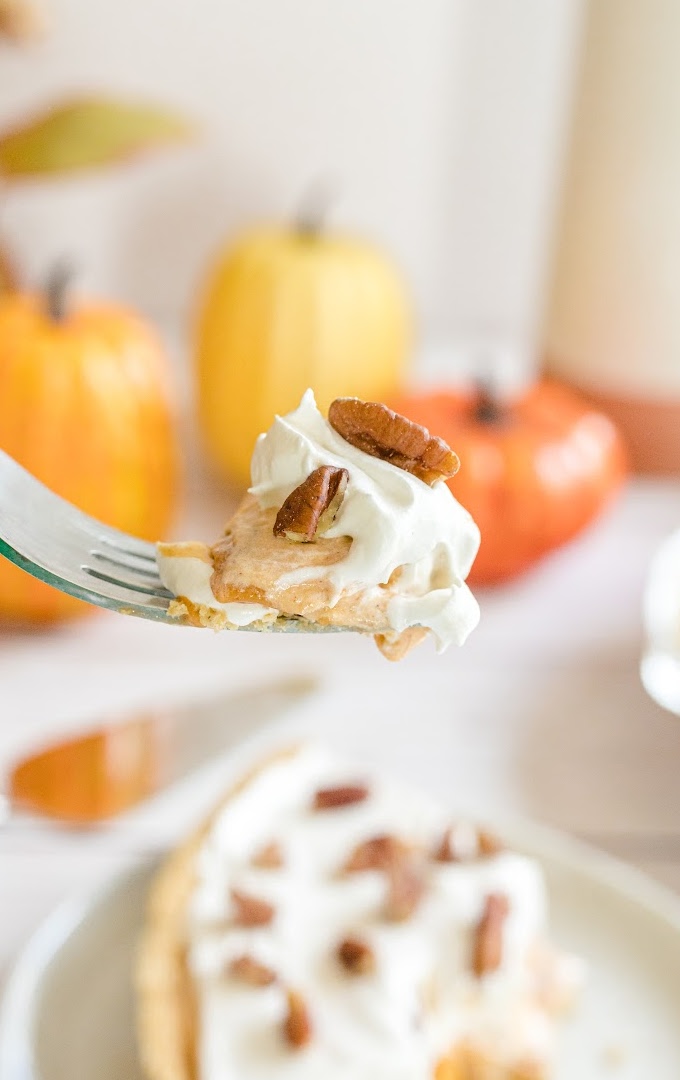 IN THE FRIDGE: Leftover no-bake pie can be stored in an airtight container in the refrigerator for up to 3 days.

IN THE FREEZER: It is possible to store layered pumpkin spice Jello pie in the freezer, but it could change the texture of the pudding and the crust, causing them to become soft. It”;s better to eat the pie as soon as possible or store it in the fridge. 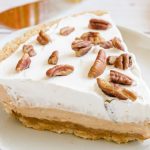