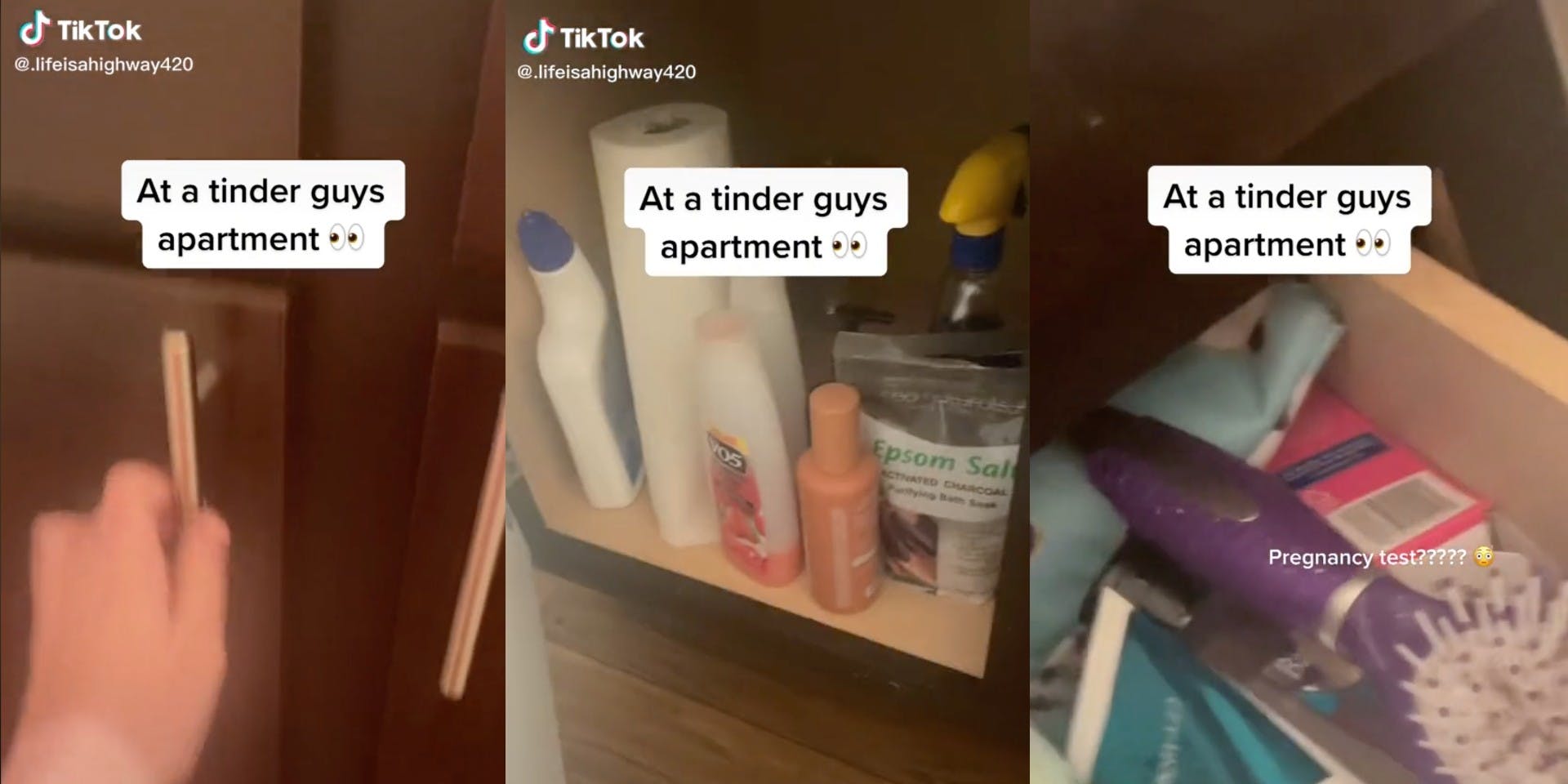 A TikToker on a Tinder date seemingly discovered her “single” date was actively living with his girlfriend.

In the viral TikTok, Elle (@.lifeisahighway420) showed herself opening a cabinet and drawer at her date’s apartment. Elle found a myriad of products that indicated her date was in fact taken and living with his partner. Among the products was a strawberry V05 shampoo, a used sparkly purple hairbrush, and wait for it—a box of pregnancy tests.

“Uhmmm what should I do?” Elle said in the caption.

The video has more than 6.7 million views on the video-sharing app.

People in the comments section urged the TikToker to leave a note for the apparent girlfriend telling her that her boo was cheating on her.

“Sis leave a note in the drawer and dipppppppp out ASAP – no one deserves this,” one commenter wrote.

In a follow-up comment, Elle explained that she found out that he had (emphasis on had) a “long term gf of 7 months.”

She also said this was her first time going over to his place after five dinner dates. Elle explained that she didn’t suspect anything beforehand and was just “looking for toilet paper not snooping.”

“I found her through his friend, told her and now we’re friends and his ass is single,” Elle wrote.

Elle said she felt “terrible” and the entire situation but is glad the now ex-girlfriend “dodged a bullet by leaving him,” in the caption of a follow-up video.

While some people in the comments section were focused on Elle’s “snooping,” the majority were in support of her actions.

“2 the ppl saying ‘weren’t Uu taught not to snoop thru ppls stuff,’ It doesn’t look like he was taught to respect his monogamous relationship/GF’s,” one commenter wrote.

“The amount of men pressed by thisss!! They’re like, ‘well it’s your fault for looking for clues that I’m cheating,” another said.

“Girls protect girls. You’re a real one for telling her,” a person wrote.

The Daily Dot reached out to Elle via TikTok comment.

The post ‘Leave a note for the girl’: TikToker finds cosmetics, pregnancy test at Tinder date’s apartment appeared first on The Daily Dot.