This paleo apple crisp is a healthy maple-sweetened fall treat that has an incredible crunchy walnut topping, a gooey sensation of warm sweet apples and it”;s simple to make. It”;s also vegan, gluten-free, grain-free and dairy-free.

This apple crisp has all the signature traits of fall and is perfect for Thanksgiving. You can serve it as a dessert or an amazing sweet breakfast treat. But if you find it”;s too sweet for breakfast, you can try these Paleo Apple Muffins. 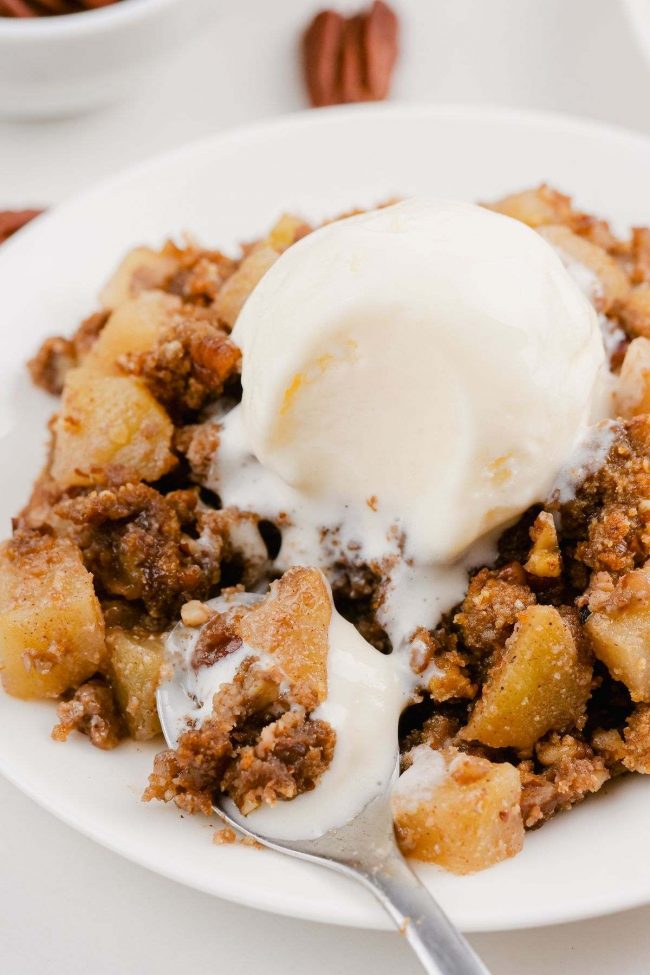 Speaking of Thanksgiving, I”;ll be making my Paleo Vegan Pumpkin Pie because we love it more than a traditional pumpkin pie. And as usual, this gluten-free vegan Swedish Apple Pie will make an appearance.

It”;s not to say that this paleo apple crisp should only be reserved for holidays. But rather it”;s the perfect dessert for apple season!

How to make apple crisp:

Mix filling ingredients and stir in apples until combined, place in an ungreased pan
Mix flour and cinnamon in a bowl add coconut oil, maple syrup and salt. Mix until combined
Pulse nuts until they”;re in small pieces and add to the topping mixture
Bake 40 to 50 minutes
Let it cool
Top with vanilla sauce and serve

Note: if you use unrefined coconut oil, the crisp will have a slight coconut taste to it. 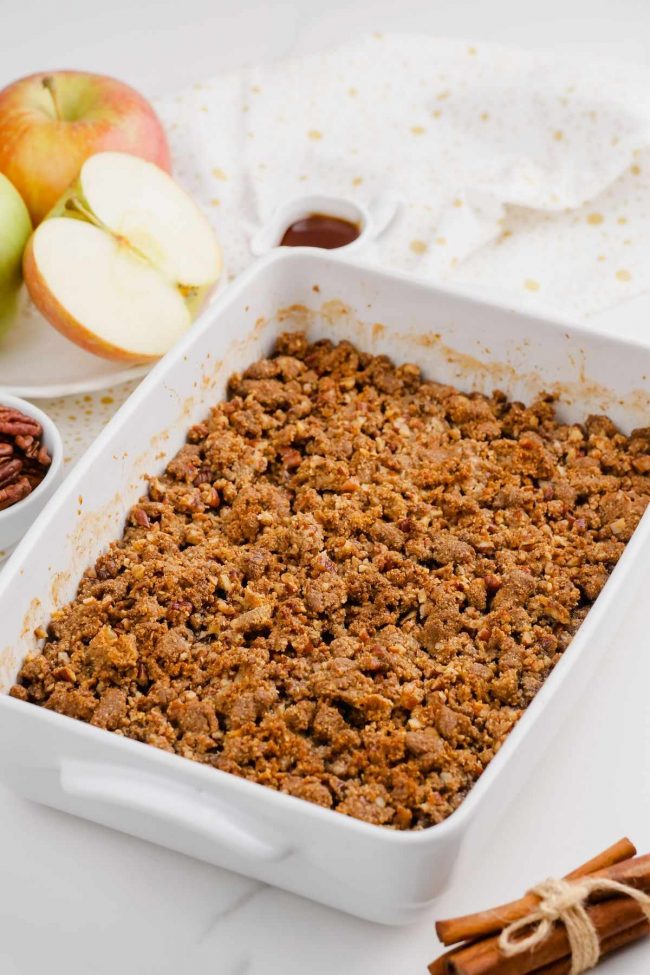 Do I have to use coconut flour?

I”;ve had a lot of questions about the small amount of coconut flour in certain recipes asking if it is truly needed, or not. And I want to say right off the bat, it is necessary!

Coconut flour absorbs liquid and even though this apple crisp recipe only calls for 1 tablespoon, it”;s needed to get that extra crunch that you want in a crisp. Without it, it won”;t be as nice and crispy as it should be. 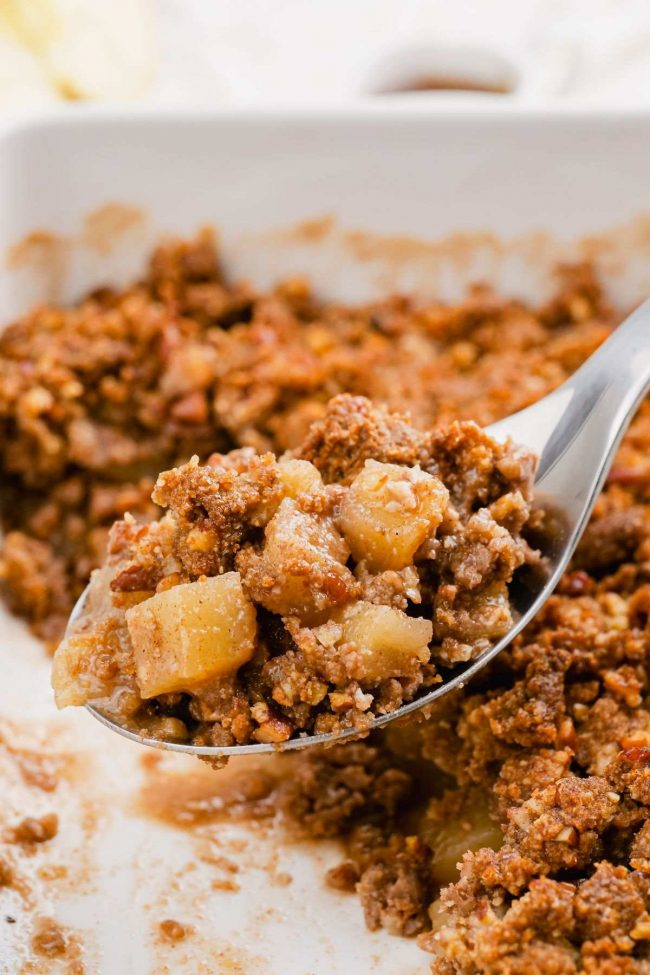 If you like grain-free baking, I definitely recommend getting coconut flour as a staple. It”;s not expensive and it lasts a long time because you usually only use small amounts at a time. 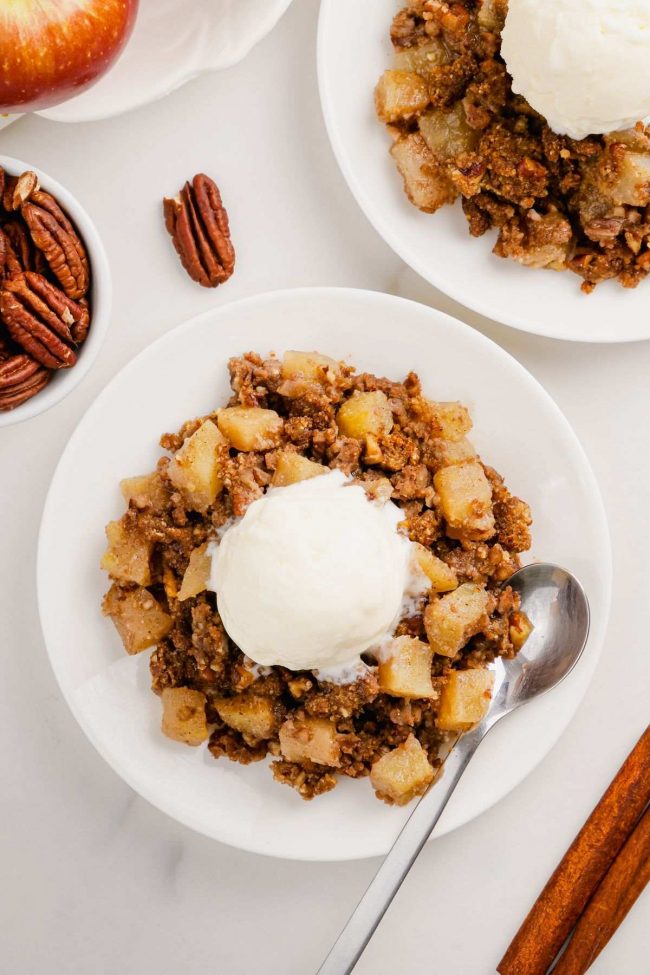 Do I have to use nuts?

The walnuts set this crisp apart from any other. I actually added more chopped walnuts than flour and it makes this apple crisp nice and crunchy. Normally, I would say you could leave out the nuts if you want, but not this time.

Nuts are essential in this apple crisp. Walnuts work, as well!

Will it be sweet enough with just maple syrup?

It only has 7 tablespoons for the entire crisp which means you need the sweetest apples you can find rather than tart ones.

If you like it sweeter, rather than add more sweetener, try adding this Vanilla Sauce. It”;s paleo and vegan and is perfect to top off your fall treats. 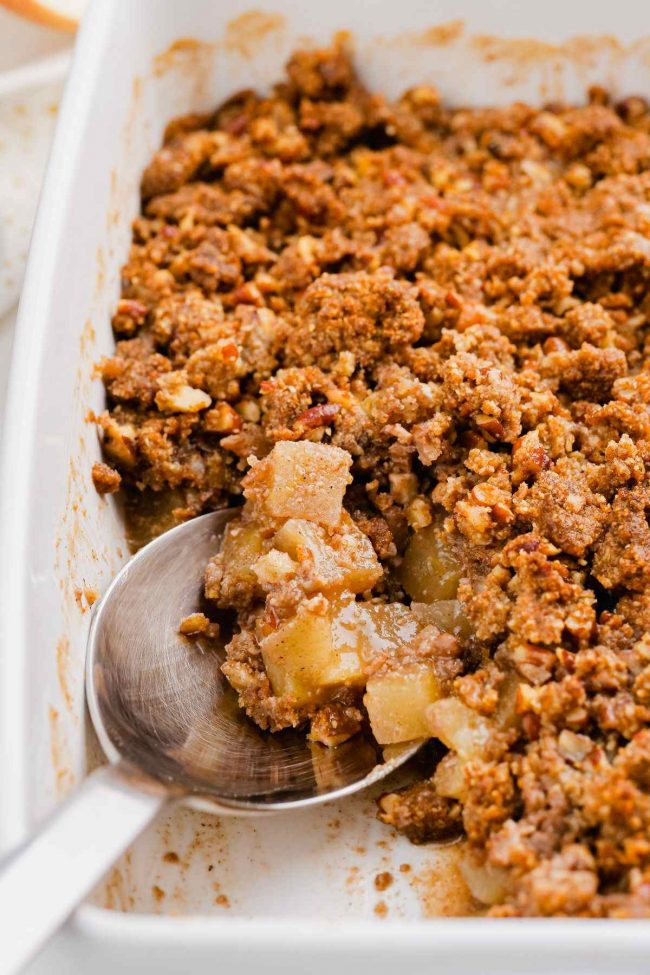 Can I use butter?

When I made this, I actually meant to use butter and accidentally used coconut oil instead. It ended up great because it became a vegan + dairy-free crisp!

If you want to use butter, you should probably use a little more – perhaps 3.5 tablespoons instead of 3? But that”;s just a guess. If you use butter and it works (or doesn’t!), let me know the amount and I”;ll update the post. 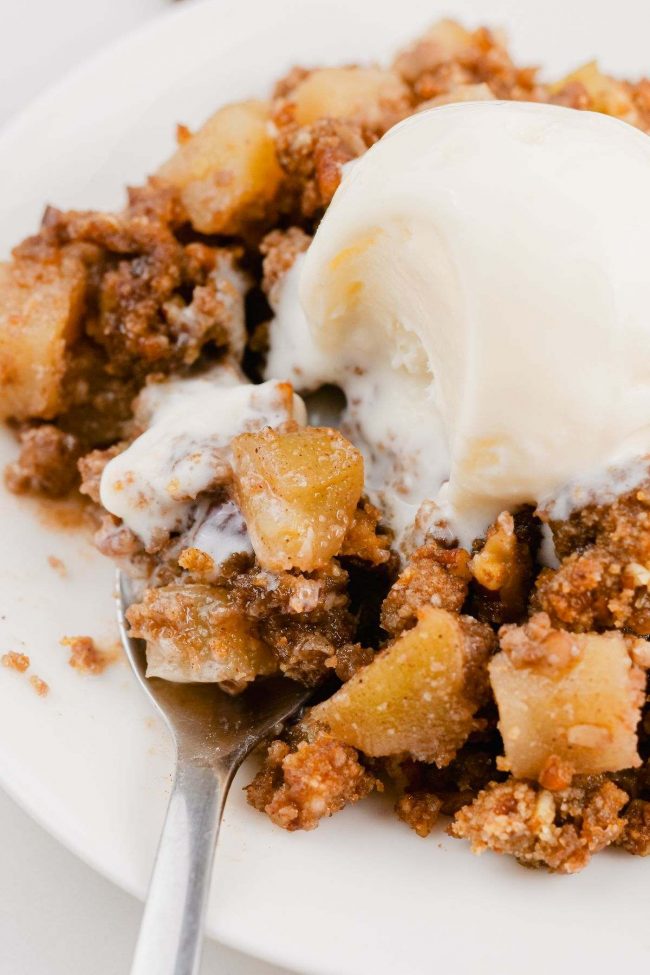 Will this crisp stay crispy?

The only downside to the grain-free topping is it will get a little soft on the second day. It”;s the same with all paleo and grain-free crisps and crumbles that I”;ve tried. So, if you don”;t think you can eat all of it on the first day, just halve the recipe.

It’s delicious the second and third day, just not as crisp! Refrigerating it also helps prevent it from being soggy.

If you”;re more into berries than apples this year, try this Paleo Blueberry Crisp. It”;s basically the same, but with blueberries, so you”;ll already have what you need. 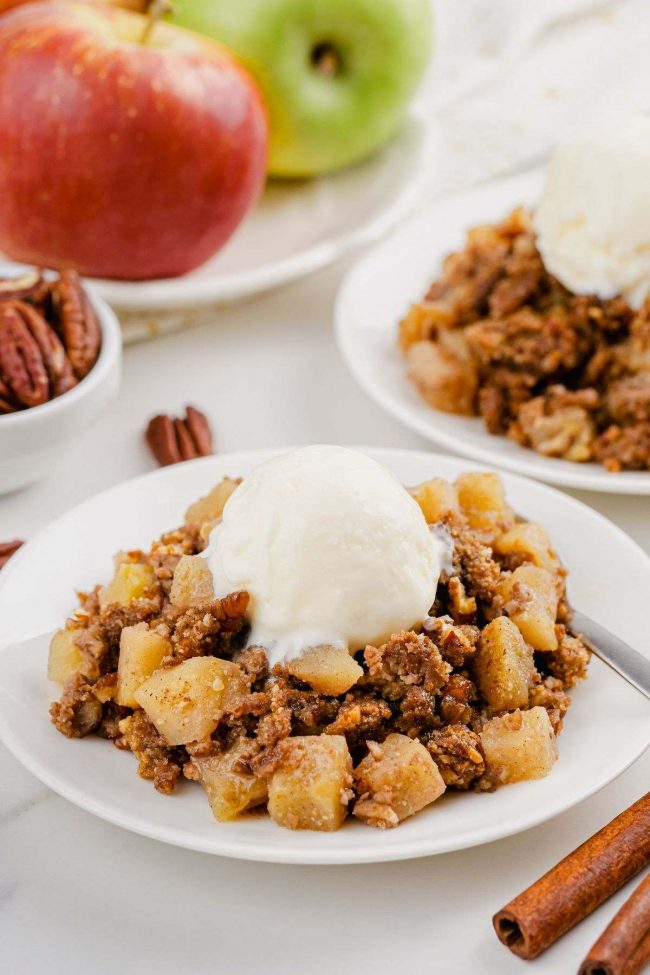 Other crisps and crumbles:

Besides the Blueberry Crisp, I mentioned above, I also have this Cranberry Apple Crisp that is perfect for Thanksgiving or Christmas. It”;s gluten-free with a vegan option and is super easy to make.
Apple Cheesecake Crisp is a little more decadent with the cheesecake layer, but it”;s so good. It”;s oat-based, gluten-free and 100% whole grain.
This Blueberry Peach Crumble is ripe for the season. It”;s gluten-free and whole grain and can be made with any fruit you like.
These Grain-free Mini Ginger Peach Crisps are great for individual desserts when you don”;t need to make a whole pan.
This 100 Whole Grain Raspberry Crumble is perfect for the end of summer gatherings. 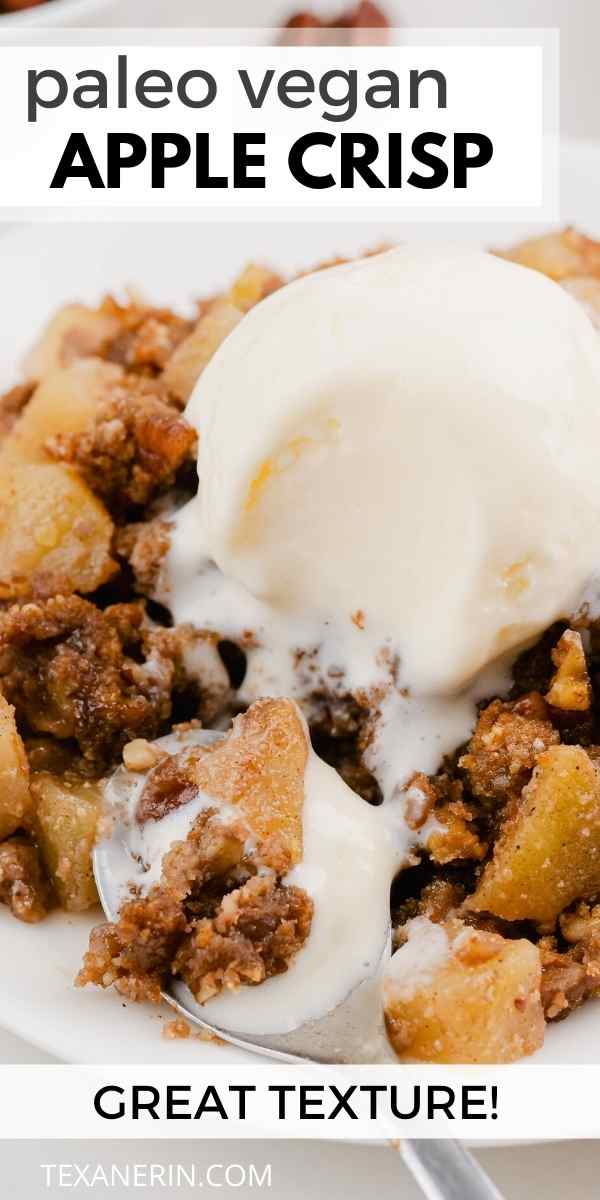 If you”;re saving recipes for Thanksgiving, then I have a list of 180 Thanksgiving Recipes that are healthy! I”;m quite positive there is something for everyone!

Pictures were updated August 2021. Here’s an old one for the people who are wondering if this is indeed the recipe you made in the past. 🙂 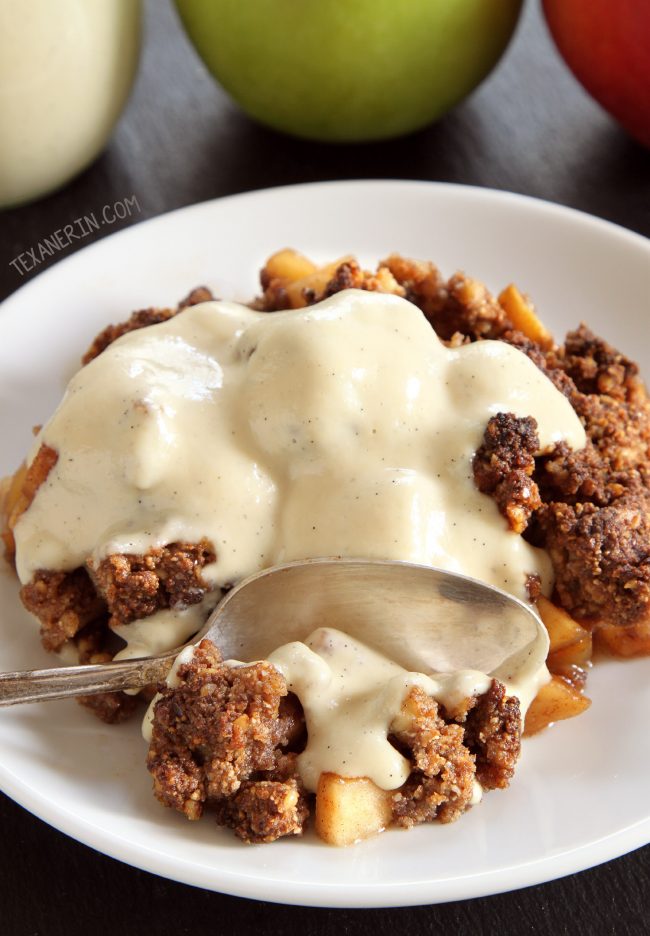 Prep Time: 20 minCook Time: 50 minReady in: 1:10 hYield: 6-10 servingsIngredientsFor the filling:1/4 cup (60ml) maple syrup1 tablespoon lemon juice1 tablespoon arrowroot starch/powder 1 teaspoon ground cinnamon1/4 teaspoon ground nutmeg1/8 teaspoon salt5 1/2 cups chopped and peeled apples (this was about 5 small to medium apples, 774 grams with the core and 630 grams of apples, post coring)For the topping:3/4 cup (75 grams) blanched almond flour1 tablespoons (8 grams) coconut flour2 1/4 teaspoons ground cinnamon3 tablespoons (42 grams) refined coconut oil1, room temperature (not melted)3 tablespoons maple syrupslightly less than 1/4 teaspoon salt1 cup (110 grams) chopped pecans or walnuts (about 1/4″ in size)To serve:paleo vegan vanilla sauceDirectionsPreheat the oven to 350°F (175°C) and get out an 8″x8″ (20cmx20cm) pan. Mix the maple syrup, lemon juice, arrowroot powder, cinnamon, nutmeg, and salt together in a large bowl. Peel the apples, core and cut into 1/3″ pieces. Place the apples in the maple syrup mixture and stir until the apples are well coated in the mixture. Place in the ungreased pan.In a medium mixing bowl, stir together the almond flour, coconut flour and cinnamon. Then add the coconut oil, maple syrup and salt and mix until combined.Pulse the pecans or walnuts in a food processor a few times until they’re in small pieces (about 1/8″ in size). You can also chop them by hand but the food processor takes a lot less time. Stir the nuts into the topping mixture. Drop walnut-sized pieces of topping over the apples. Gently press down any nuts that are sticking out so that they don’t burn.Bake for 40-50 minutes or until the topping is brown and crisp and the apples are bubbling. The topping will crisp up much slower than a traditional crisp, but don’t worry as it will crisp up towards the very end of the baking time. Cover the crisp with foil if the topping starts to brown too early.Let cool for 10 minutes and serve. If not serving immediately, once cool, loosely cover with a piece of plastic wrap (so the topping doesn’t go soft). If storing overnight, properly cover the crisp with plastic wrap. Do note that the topping gets soft on the second day.NotesIf you use unrefined coconut oil, this crisp will likely have some coconut taste to it.Permalink: https://www.texanerin.com/paleo-vegan-apple-crisp/