After 25 years, the beloved PBS children’s series Arthur came to an end with a series finale that focused on what happens to the series’ main characters when they grow up. Aptly titled “All Grown Up,” the series finale doesn’t only look ahead to the future for characters like Arthur, Buster, Francine, and Muffy, but it also acknowledges some of the most beloved parts of the series’ past along the way.

RELATED: How Each Main Character’s Appearance Changed On PBS’ Arthur

While the actual flash-forward sequence is relatively short in length, the episode, on a whole manages to pack in reference after reference to some of the series’ most beloved characters, episodes, and storylines that longtime fans would immediately recognize. 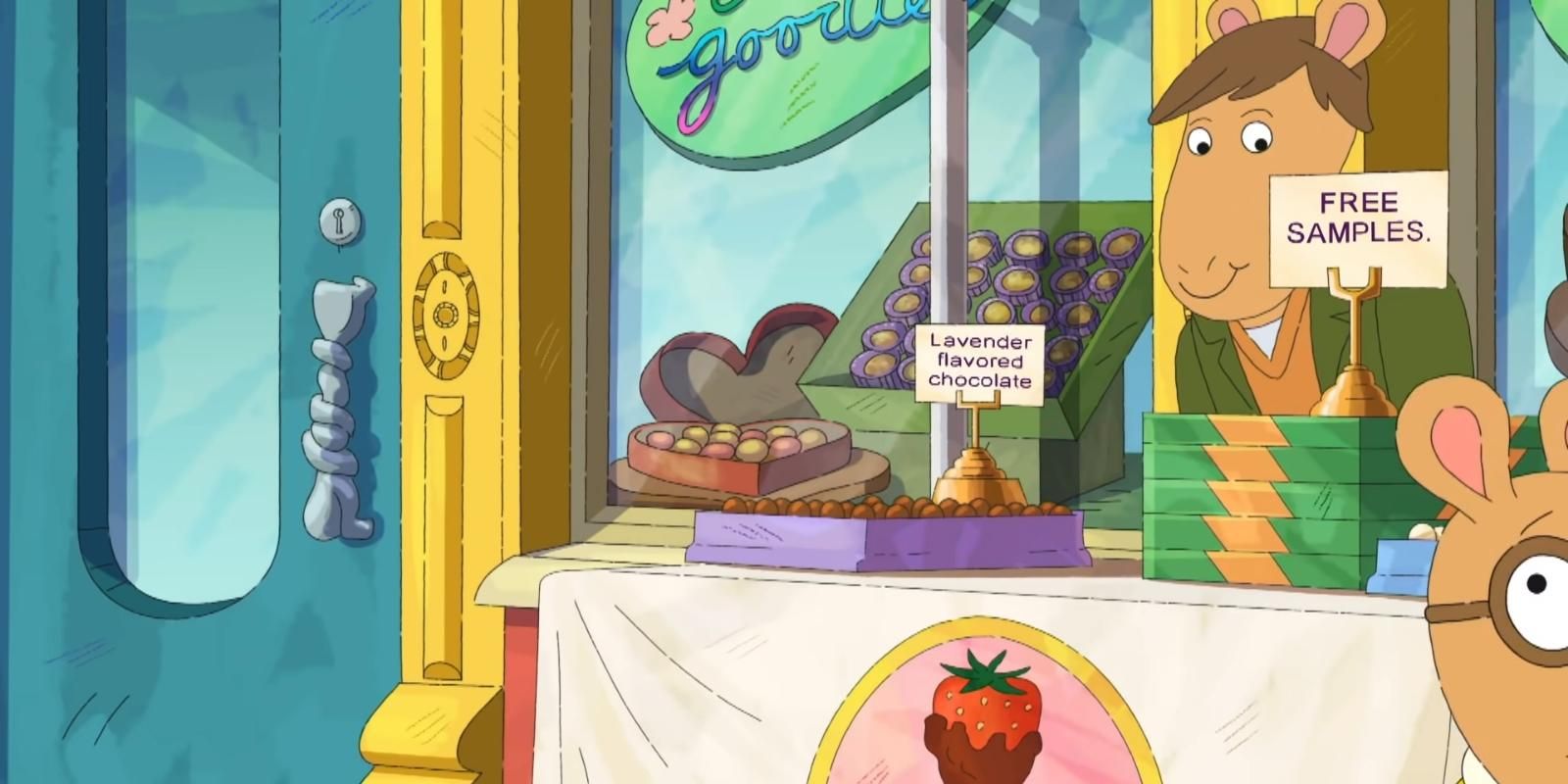 Patrick is a pretty minor character in the world of Arthur, but his character nevertheless makes quite the impact due to his role in the groundbreaking episode “Mr. Ratburn and the Special Someone.” Patrick, of course, is Nigel Ratburn’s husband, but he is also a proficient chocolatier.

In “Mr. Ratburn and the Special Someone,” Patrick shares chocolate samples with quirky flavors and fun themes, including chocolate inspired by Frida Kahlo. At the beginning of “All Grown Up,” Patrick’s odd chocolate samples once again appear as Buster tries, initially hates, and then loves a lavender-flavored sample. 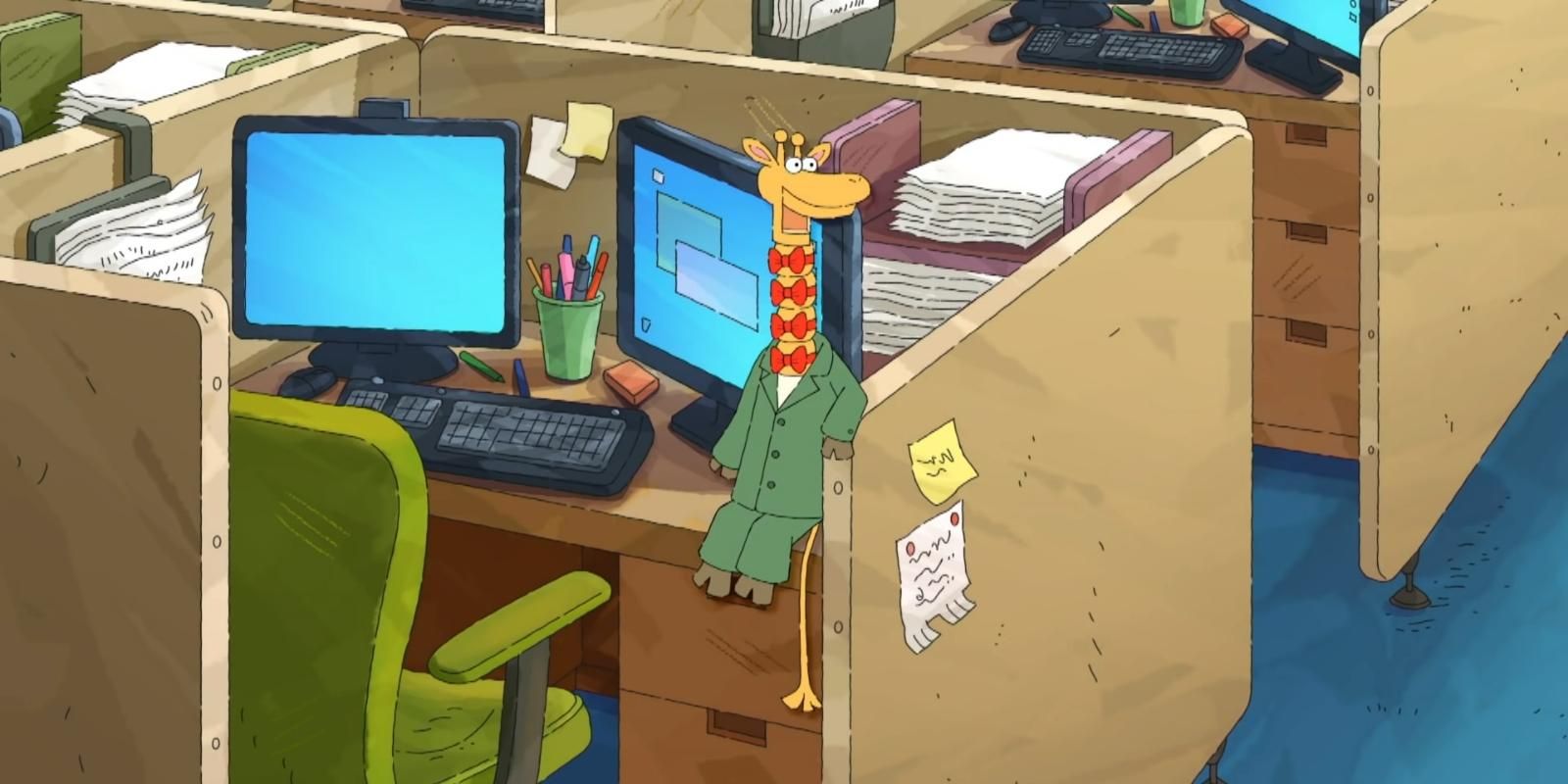 “All Grown Up” features many different possibilities for how the series’ beloved characters will grow up, thanks to the intervention of an interactive board game, Oskar the Oracle Octopus. Before the series introduces the real future 20 years afterward, it includes possible futures for Muffy, Francine, and Buster.

In Francine’s theoretical future, she goes on to work at a technology company alongside Slink from the Tough Customers and George Lundgren. And in a fun cameo, George’s beloved ventriloquism dummy, Wally the giraffe, sits prominently on his desk in his cubicle. 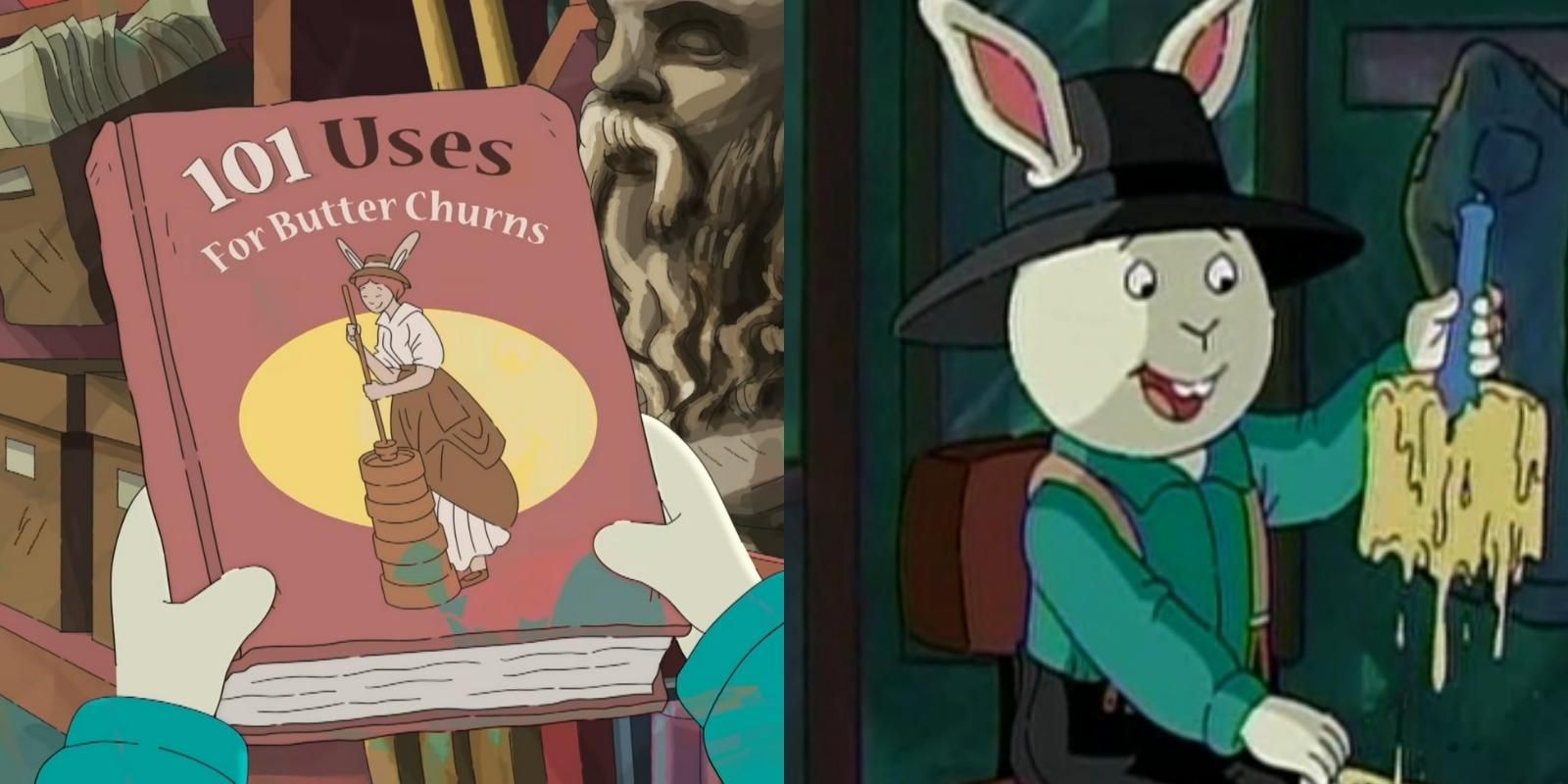 Buster Baxter has always been one of the best characters on Arthur due to his humor, heart, and the many zany adventures he gets into over the years. The final episode features a fun callback to one of these adventures, as seen in the episode “Buster’s Amish Mismatch.”

In that episode, Buster decides to try and live an Amish lifestyle, which sees his unsuccessful attempt at churning butter (as he produces mayonnaise instead). In “All Grown Up,” Buster finds a library book entitled 101 Uses for Butter Churns and excitedly decides to take it out. He could certainly use the help. 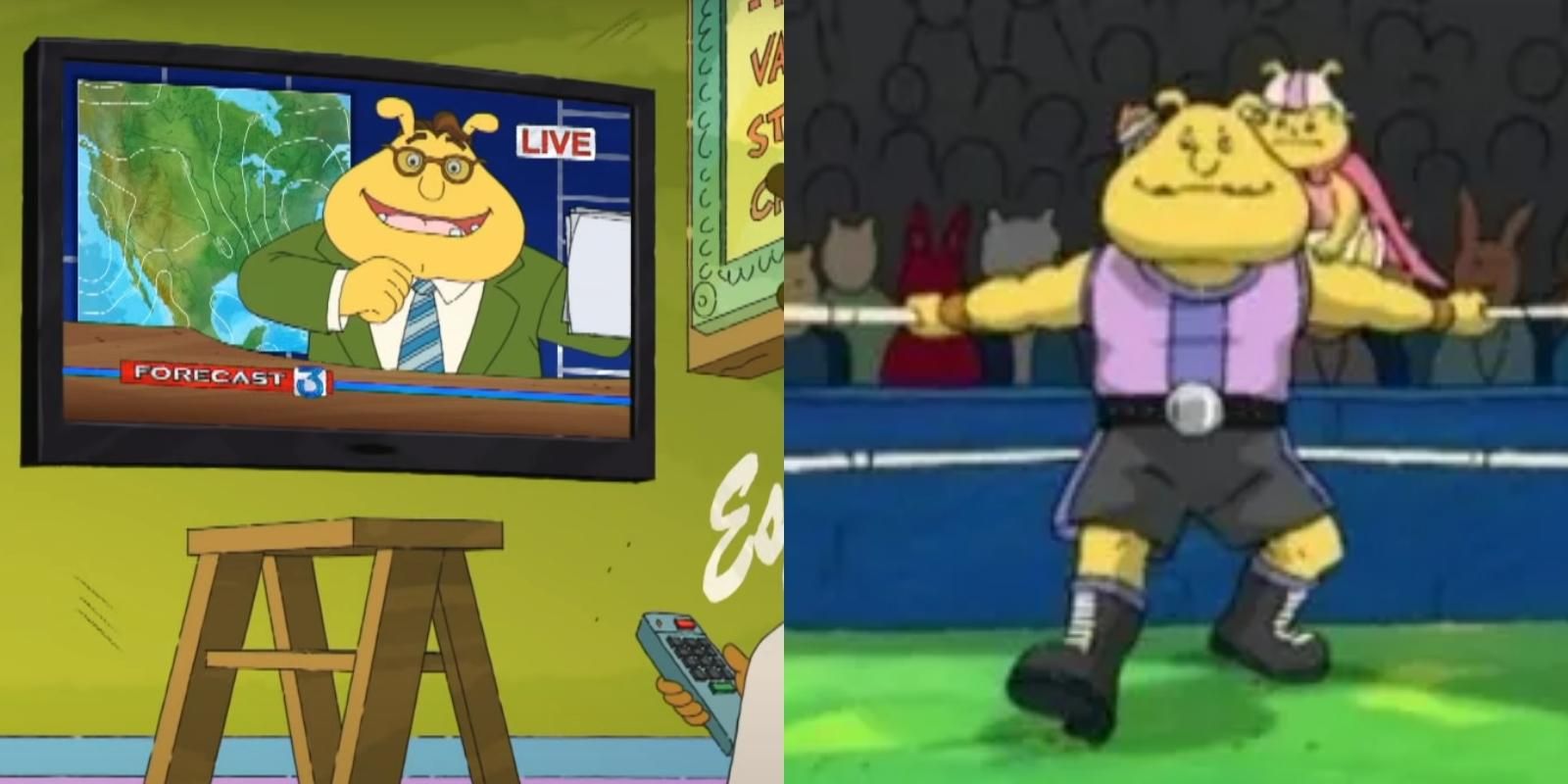 Arthur has always been ahead of its time in many ways, including how it allowed onetime bullies to redeem themselves and become nuanced characters worth rooting for. There is no clearer example of this than the lovable Binky Barnes, who, in the finale, is another character who gets to have a fun callback to some of his character’s defining traits.

In the finale’s flash-forward, Binky is surprisingly working as a meteorologist for the local Elwood City news channel. But even though he is in a completely unrelated profession, Binky still manages to work in references to one of his first loves, wrestling, when he notes that a cold front is going to “body slam” the city in the coming days. 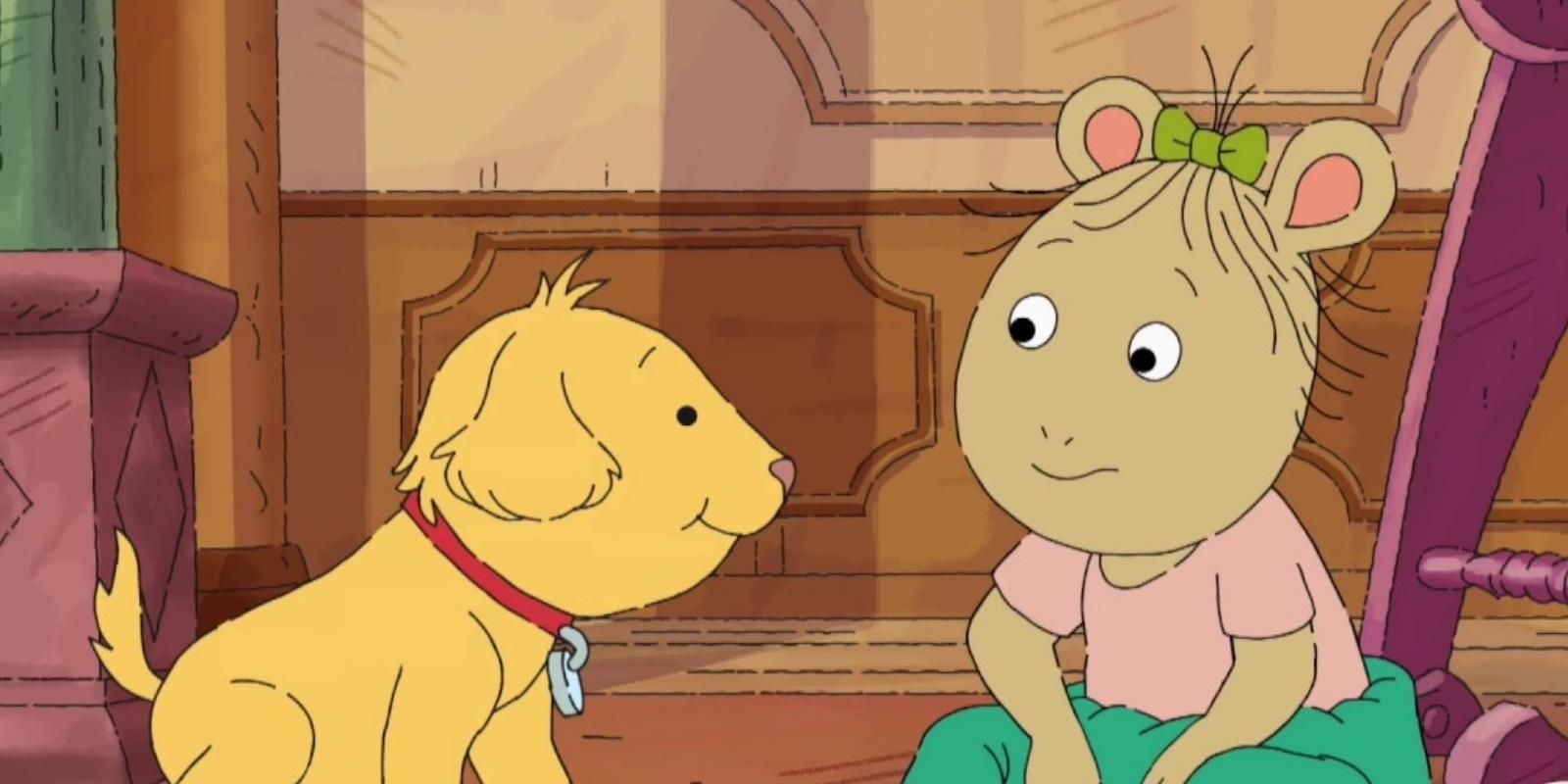 Baby Kate and Pal are two of the most important supporting characters in the world of Arthur, even though no one in their family understands them except for each other. Throughout the series, these two get their own in-world spinoff of sorts, where entire episodes are devoted to their adventures in the world of babies and animals.

The finale flash-forward includes a fun little reference to these recurrent storylines. When Buster, now a teacher of some sort, praises Kate’s writing talent, he comments that she has written a story “about a baby who can read animals’ minds.” 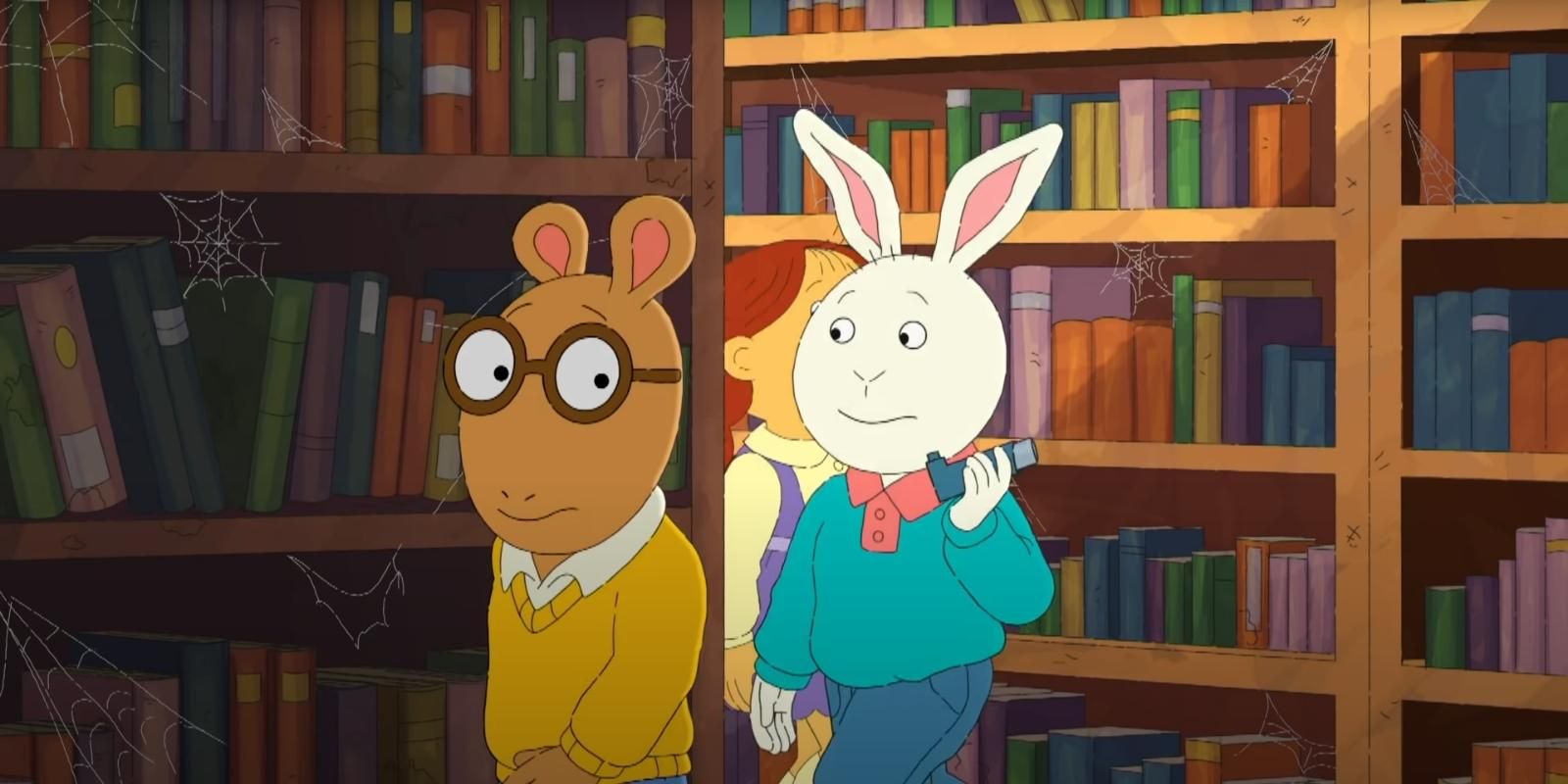 As part of Arthur’s commitment to representing the world as fully as it can, the series has always featured a number of characters with disabilities. One of the earliest examples of this occurs in the season 4 episode “Buster’s Breathless,” where Buster learns that he has asthma.

Buster’s asthma has been a recurrent storyline throughout the series, and the finale once again includes a reference to this fact. While the group are wandering through the dusty stacks in the library, Buster takes out his inhaler and takes a few puffs of his medicine since he is sensitive to dust. 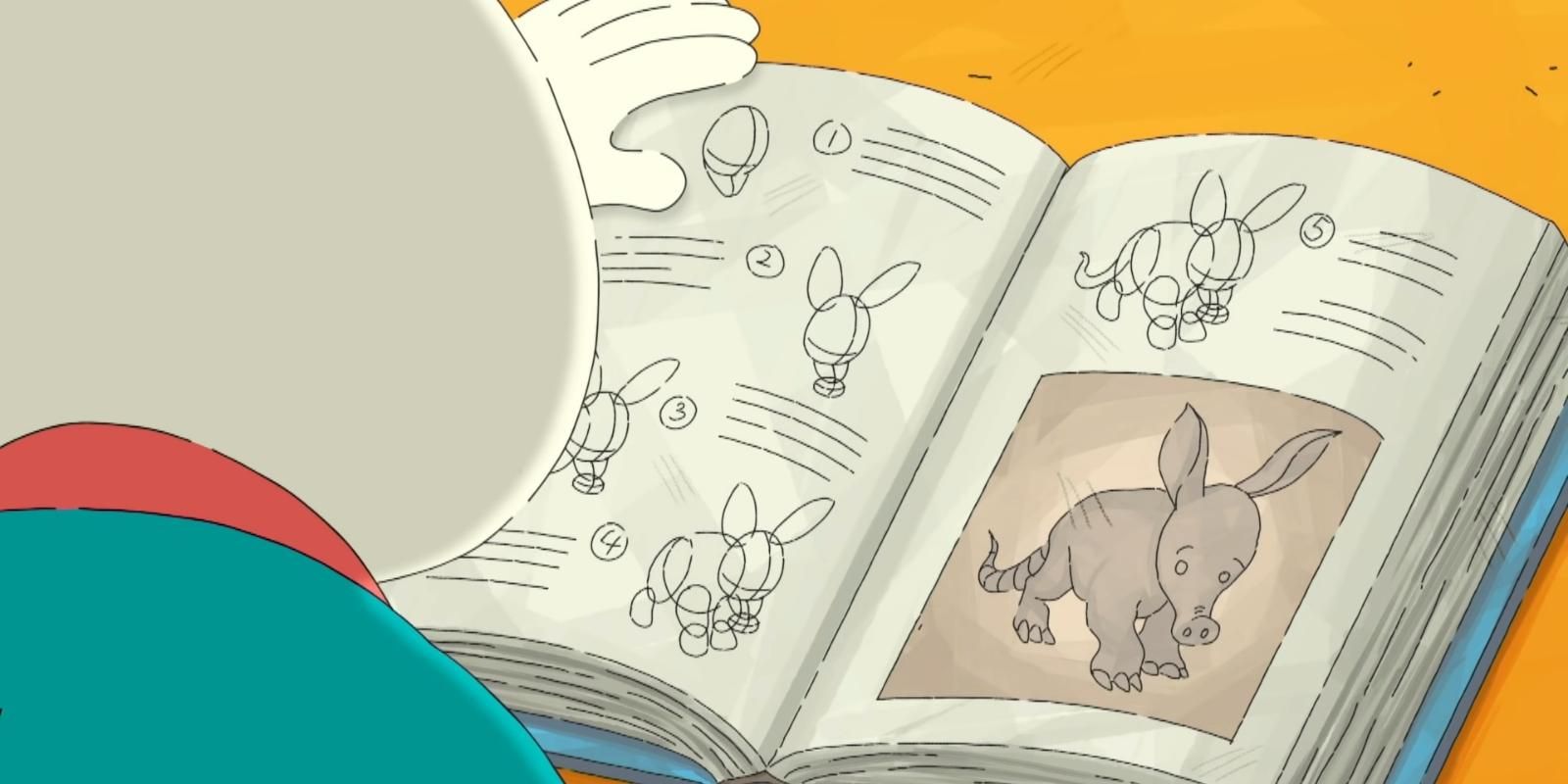 At the beginning of “All Grown Up,” Ms. Turner, the librarian, gives Arthur the wrong book at checkout. The book, Drawing Animals the Easy Way, winds up playing a pivotal role in shaping Arthur’s eventual future as a graphic novelist. But before then, the series takes the opportunity to have some fun with Arthur’s character history.

Buster flips through the book and suddenly stops when he notices something. “Hey, this shows you how to draw an aardvark!” he exclaims. “I never knew their noses were so long. Weird.” This is, of course, a tongue-in-cheek reference to Arthur’s original character design in Marc Brown’s illustrated children’s books, in which Arthur once looked much more like a realistic aardvark, long nose and all. 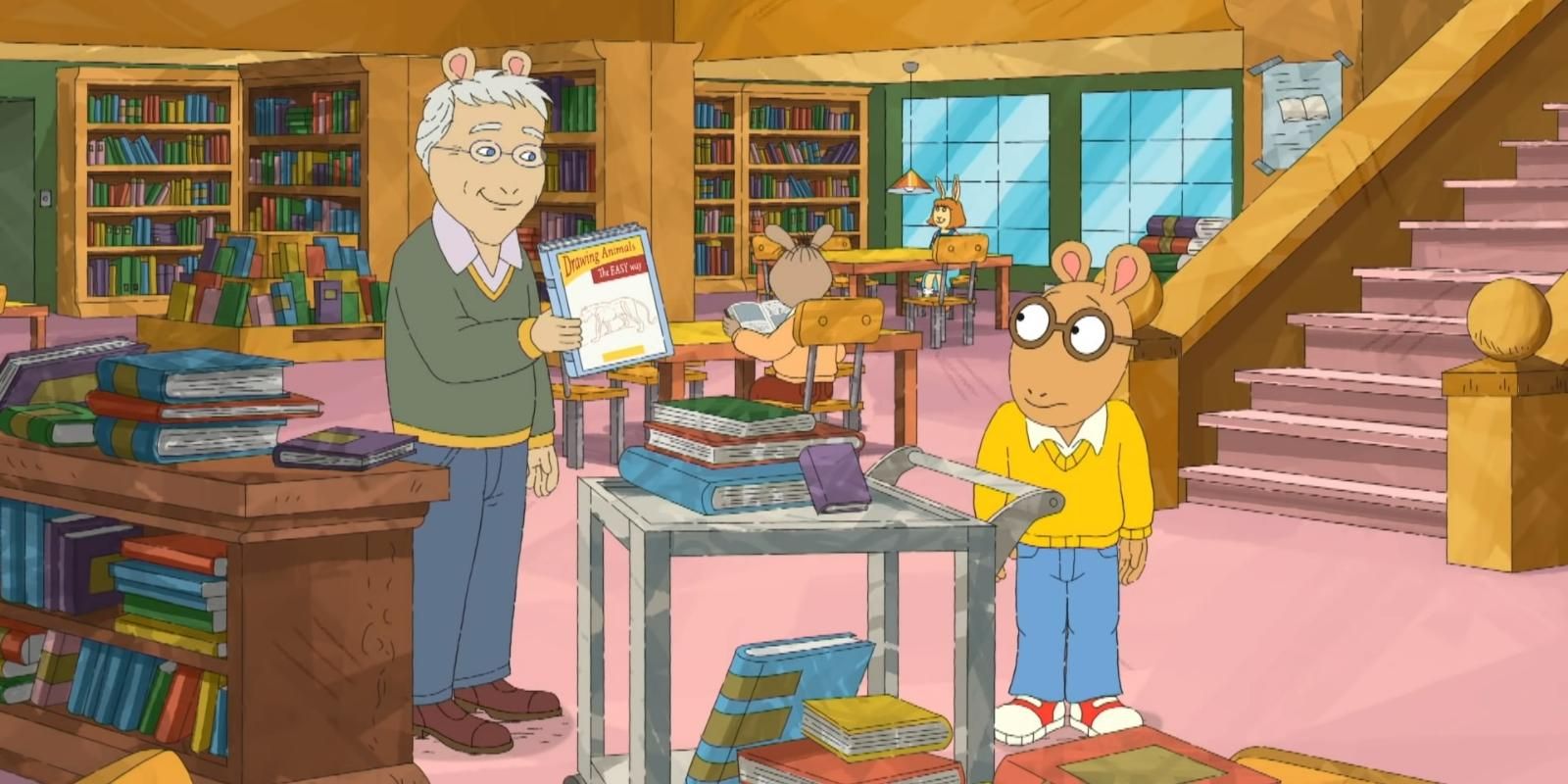 Speaking of Brown, the man behind the aardvark gets to appear in a few important scenes in the final episode. Brown’s character, an adult aardvark with glasses and white fluffy hair, has appeared in the background throughout the series a few times, and has a significant role in the season 20 episode “Fern’s Flights of Fancy.”

RELATED: Arthur & 14 Other PBS Shows 90s Kids Still Love (& Where To Stream Them)

But the finale “All Grown Up” is the first time that Arthur and his creator come face to face at the Elwood City Library. Brown’s character is the one who convinces Arthur to keep Drawing Animals the Easy Way, and that encouragement completely changes the trajectory of Arthur’s life from that moment on. 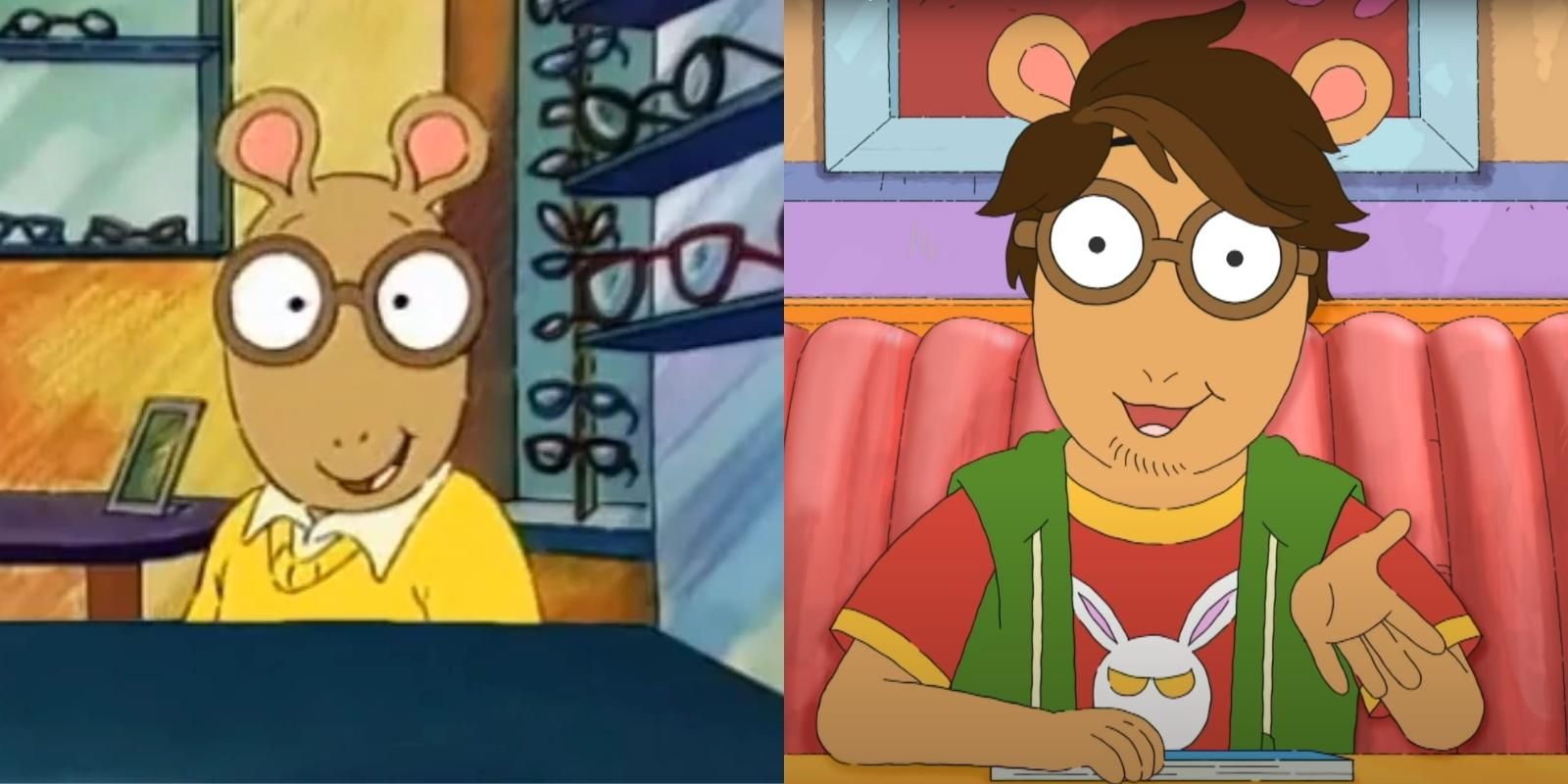 Given the fact that Arthur ran for 25 years, it should come as no surprise that many different voice actors were cast in the role of the titular aardvark throughout the years. In fact, ten different child actors played the role of Arthur across the series’ run.

But the finale’s flash-forward sequence allows things to come full circle for both the character, Arthur, and the series in a very sweet way. Michael Yarmush, the 39-year-old actor who voiced Arthur as a teenager from season 1 through season 5, returns for the finale’s ending sequence to provide the voice for the now 28-year-old Arthur. 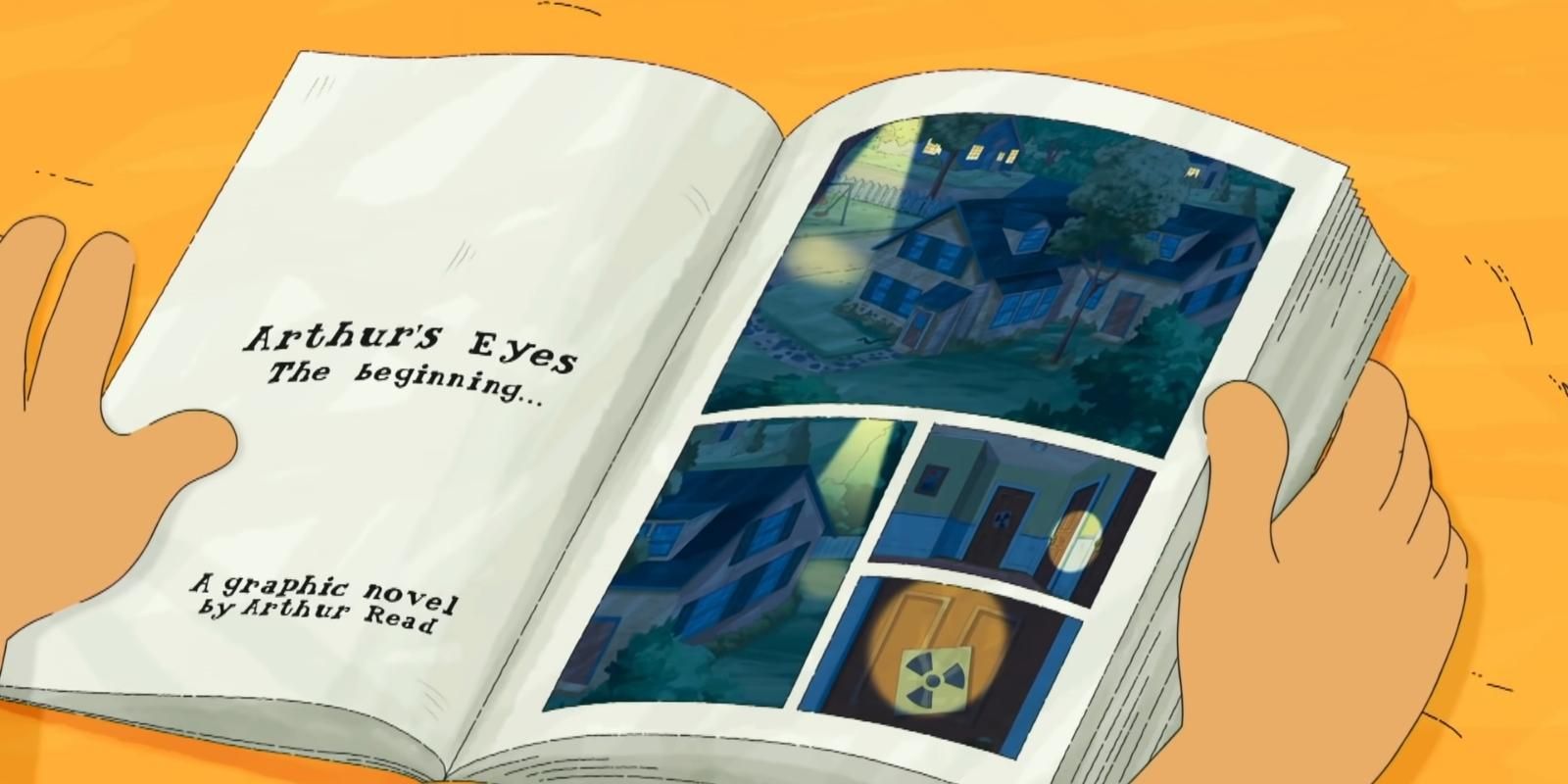 The return of Arthur’s original Arthur voice actor isn’t the only way that the series allows things to come full circle with its ending. Arthur reveals to his friends that he has finished writing and illustrating his first graphic novel, simply titled Arthur, which is of course meant to be the series itself.

But the finale takes things one step further. When Arthur opens the novel and begins to read it aloud, the first chapter of the book is, in fact, the first episode of the series, “Arthur’s Eyes.” The first page of graphic panels is even shot-for-shot taken from the first episode as well, providing a seamless return to where it all began.

NEXT: Which Arthur Character Are You Based On Your Zodiac?