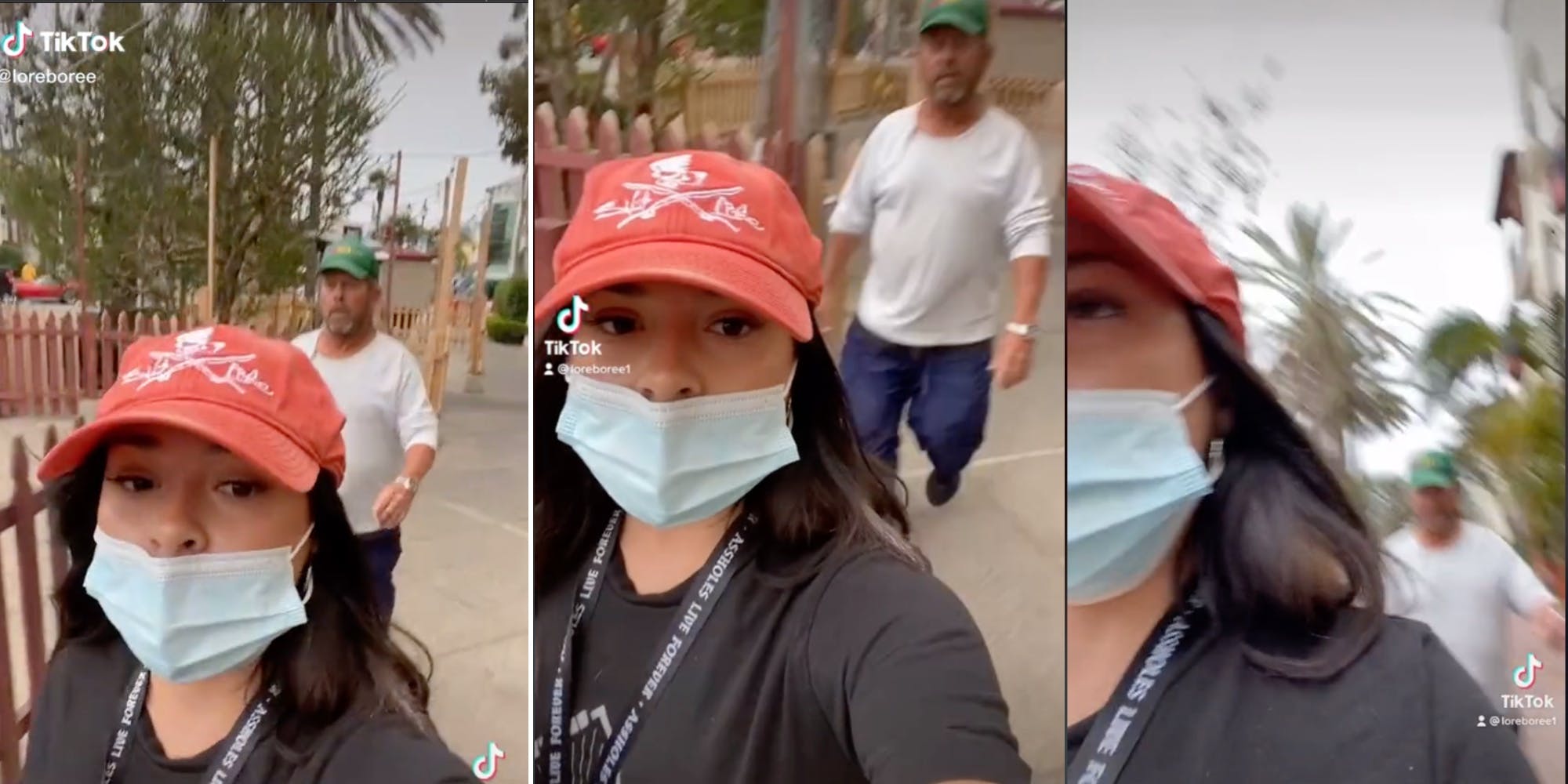 A TikToker has been getting attention for filming her stalker of four years, detailing the incidents with him, and explaining how police were slow to help her.

Repost after this happened ! I can’t believe my account got taken down trying to spread awareness!

Her bio reads “Girl w the stalker” under her current account @loreboree. Her previous account with 250,000 followers got taken down, and she says she created the new one to continue to spread awareness about her being stalked.

Her first TikTok on the new account has 4.4 million views and shows her walking outside and being followed by a white man wearing blue jeans, a white long-sleeved shirt, and a green trucker hat. She tells the man to leave her alone several times, but he persistently walks behind her and talks to her.

“Just talk to me for two minutes and I’ll leave you alone,” the man says, keeping pace with her. “Why are you dressed like that? Are you a prostitute? I’m serious.”

“Sir, please leave,” she responds as the video cuts off.

The second TikTok is a repost of a video from her now-deleted account, which shows the man following her and reads: “This man has been following me around for 4 years. Also… HAPPY EASTER.”

In the repost, she shares replies to a user’s comment: “Did he really just say on camera ‘that’s ok I don’t care what you want’ after you said leave me alone? This is why most of us never feel safe!”

The overlay in the video reads: “Thank you everyone im fine. This is the rest of the video. This lovely couple had walked me to my car. This is not okay. I hope we spread awareness. Also the police told me I would have to share my identity to get a restraining order.”

“I can’t live here anymore because you stalk me,” she says to him. “Please, God bless you but please leave me alone.”

She then posted a series of videos of her explaining the situation further.

“I would always go to the cops, they wouldn’t take me seriously, they said they couldn’t do anything about it,” she says about the man stalking her for many years and her recording it. “Once that video on my old account got absolutely viral, they came to my house and they actually took further steps, got the restraining order, took care of it.

“I was trying to spread awareness because it is something that is actually very common…” she explained further. “It’s a pretty fucked situation… I moved, I live somewhere else.”

She also describes how a couple helped her out of the situation in the previous videos by distracting the man so she could get to her car.

“When you guys say start calling the police [don’t make] a TikTok, well, the police haven’t really been on my side for that time so, yeah, I kind of needed to film stuff. And because it went viral, that’s literally the only reason they came to my house to help me [file a restraining order].”

She also reposted another video from her old account where she talks about how the stalking is affecting her.

“It’s been four years of harassment that has been coming on for so long and I’m fucking over it now. I’ve finally cracked,” she says. “I’m getting Starbucks and I have to worry about being followed to my car. I have to worry about my name being said at the Starbucks when my coffee’s ready. I’m worried about my own family’s safety. I’m breaking like this shit is really getting to me.

“I’ve talked to many, many officers about this situation and I know what I’m doing isn’t the smartest but I literally cannot…I pray for this man every day but it’s sucking out of me. I have to worry about walking in my own city.”

She also says people on TikTok have said they don’t believe she’s the girl being followed in the videos. She also said she gets backlash often for not talking to the man.

“Maybe if u just talked to him,” said @tyler_noname.

“And that’s why she tryna make it seem like he a creep but in reality he isn’t because he wants answers,” wrote @chepe_1998.

Many other TikTok users chose to offer their support instead of victim blaming her.

“I manage the Starbucks you went to. He kept coming back for a week or so after that day. I haven’t seen him since and you’ll be safe at my store 💚,” commented @turntopaige8.

“Some of y’all need to understand that no means no, no matter what the circumstances are,” said @kirkpatrick98.

Others also criticized the police for being slow to take action.

“The fact that you had to move, spend thousands of dollars just to get peace of mind is so frustrating. And the cops 😡😡😡😡,” said @haviland123.

“It’s ridiculous that it took the video to go viral for the cops to do anything,” agreed @itsnicholle.

The Daily Dot reached out to the TikToker via comment section but has not heard back.

The post ‘Please leave me alone’: TikToker posts viral video of her stalker, says police were slow to help appeared first on The Daily Dot.