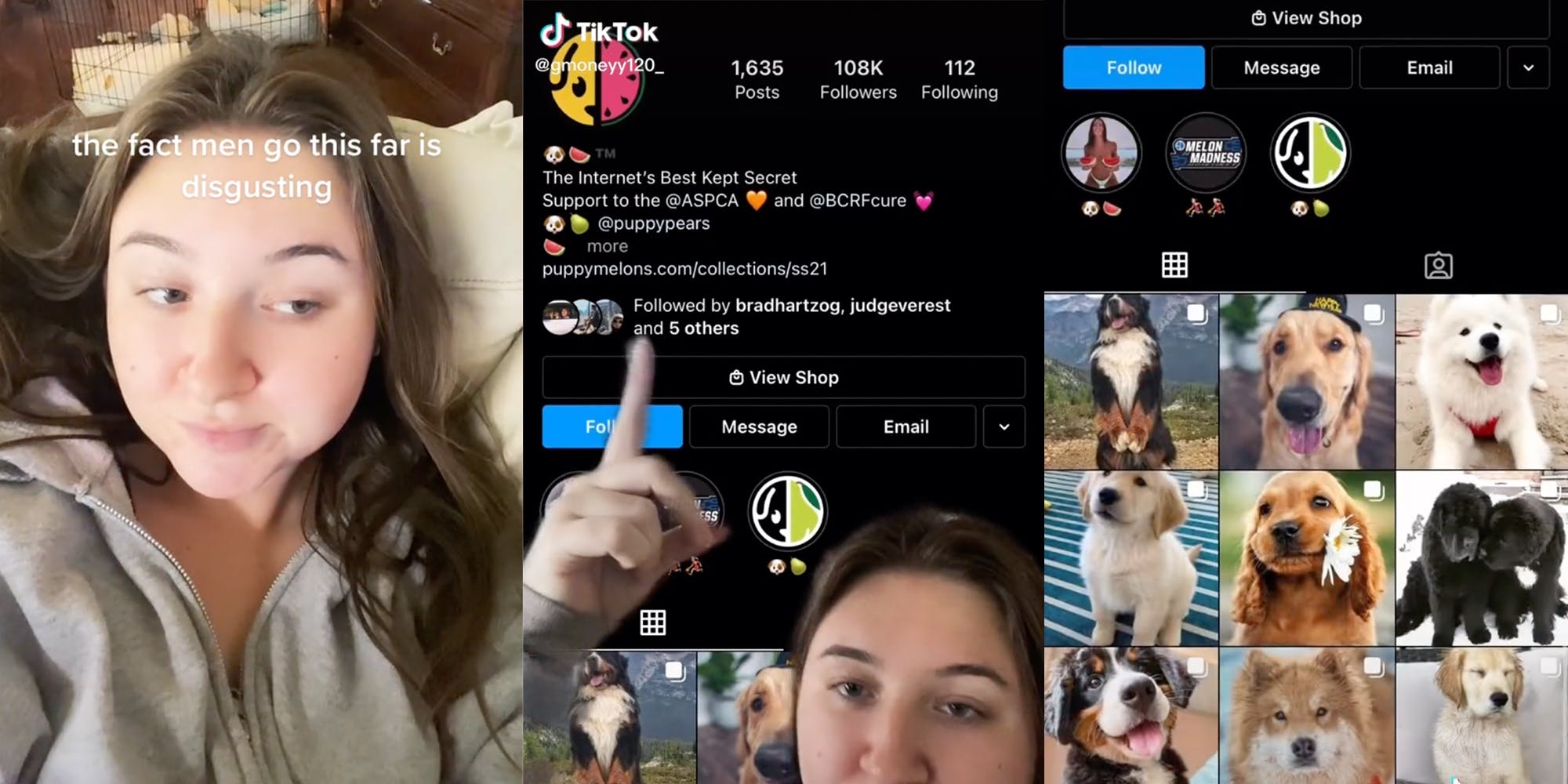 In a viral TikTok posted on Monday, TikToker @gmoneyy120_ shares screenshots of @puppymelons, an Instagram account with almost 120,000 followers that posts photos of dogs and women. The posts always include a photo of a dog on the first slide and a photo of a woman, usually an Instagram influencer, on the second slide.

The Instagram bio for @puppymelons calls the account “The internet’s best kept secret.” At first glance, the account looks like it posts photos of dogs. But the account’s bio says users must be 18 or up because when a user clicks on an individual post, the following slide shows an Instagram model, often wearing lingerie or a bikini. The PuppyMelons website describes itself as a “philanthropic organization” that sells merch for charity.

But TikTokers are criticizing the Instagram account and its followers for the one-two punch. To an observer out of the loop, the page appears to only post dogs. That would be convenient if someone didn’t want to be caught looking at photos of sexy women.

“The fact men go this far is disgusting,” @gmoneyy120_ wrote in the overlay text of her video.

“There’s no other explanation,” @officialtomnook commented on the TikTok. “They simply get off on lying to women.”

“The amount of men who liked and commented on this page with pics of their families [and girlfriends] on their page is devastating,” @librawh0re1111 wrote.

TikToker Noah Glenn Carter, whose videos feature his commentary on viral TikToks, summed up the issue that @gmoneyy120_ and commenters have with @puppymelons. “A lot of girls are mad at this because the account is basically designed for guys to hide it from their girlfriends,” Carter explained. “A lot of girls are considering this to be cheating and completely dishonest.”

The owner of @puppymelons, who asked to go by Mr. PuppyMelons to preserve his anonymity, told the Daily Dot in a phone interview that the account is not about helping men trick their girlfriends into thinking that they are following a dog account when they’re actually looking at photos of Instagram models. He said his goal is to raise money for the American Society to Prevent Cruelty to Animals (ASPCA) and the Breast Cancer Research Foundation (BCRF).

Mr. PuppyMelons said that all the proceeds from PuppyMelons merchandise go to those charity organizations or other causes, depending where funds are needed most.

“We knew if we wanted to raise money, there had to be a twist somewhere,” Mr. PuppyMelons said. The twist? Combining a following that the page would get from posting dog pictures with the following it would get from posting pictures of Instagram models. “So instead of having to follow a million dog pages, a million model pages, you could have it all in one place. And then send it to your buddies.” 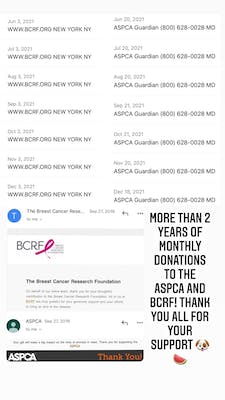 “It is something that our mothers support, our aunts support, our grandmas actually have @puppymelons merchandise,” Mr. PuppyMelons told the Daily Dot. “We have extremely strong female role models. So we’d never do anything that we thought was really disrespectful to them.”

Mr. PuppyMelons said the dog owners and models consent to having their photos posted on the account. The account is currently run by only Mr. PuppyMelons but in the past has functioned with up to four admins.

User @gmoneyy120_’s TikTok generated an immense amount of attention—both positive and negative—for @puppymelons. Mr. PuppyMelons told the Daily Dot that the account received the most donations and experienced its largest one-day growth in followers “ever experienced.”

But Mr. PuppyMelons said that in addition to adverse comments on the account’s posts, he and followers of the account have received death threats and “wishes of sickness on our families and attempts to [affect] our livelihoods” from people who saw @gmoneyy120_’s TikTok.

Puppymelons comment section is an all out war zone right now

“It has completely crossed the line of what would be considered even remotely acceptable,” Mr. PuppyMelons said. He asks that “individuals coming from [TikTok] find a more positive approach to this situation.”

@puppymelons’s Instagram stories have taken a less diplomatic approach. In response to its “new ‘concerned’ TikTok friends,” the account posted a video of Dwayne “The Rock” Johnson saying “shut up bitch.” @puppymelons also posted a video of Conor McGregor saying “I’d like to take the chance to apologize to absolutely nobody” with the caption “[PuppyMelons] forever.”

“[Puppymelons] and our supporters have made the world a better place while you’ve brought nothing but hate,” @puppymelons wrote on a screenshot of @gmoneyy120_’s TikTok posted on the account’s story. “Sit down.”

The Daily Dot reached out to @gmoneyy120_ via TikTok comment.