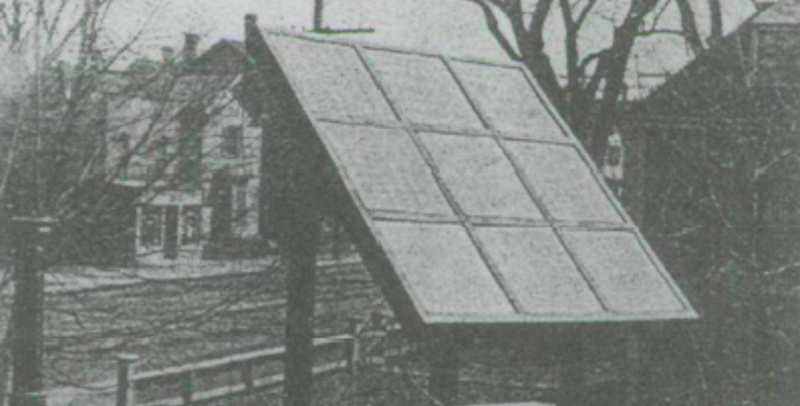 If you want to read about a low-tech approach to solar cells invented — and forgotten — 40 years before Bell Labs announced the first practical silicon solar cell, we can’t promise the website, Low Tech Magazine, will be available. Apparently the webserver it is on is solar-powered, and a disclaimer mentions that it sometimes goes offline.

The article by [Kris De Decker] tells of George Cove and includes a picture from 1910 of the inventor standing next to what looks suspiciously like a solar panel (the picture above is from a 1909 issue of Technical World Magazine). His first demonstration of the technology was in 1905 and there is a picture of another device from 1909 that produced 45 watts of power using 1.5 square meters with a conversion efficiency of 2.75%. That same year, a new prototype had 4.5 square meters and used its 240-watt output to charge 5 lead-acid batteries. The efficiency was about 5%.

Of course, 5% doesn’t sound so great today. But to put it in context, the original Bell solar cells in 1954 had about 6% efficiency. Oddly enough, Cove didn’t set out to build solar electric generators. He was actually trying to build a thermoelectric generator to produce electricity from a wood stove.

His design used metal plugs in an asphalt substrate. One end of the three-inch plugs would get hot while the other was meant to stay cool. The temperature difference ought to create a bit of electricity and with almost 1,000 plugs in the 1.5 square meter panel, there would be enough to do something useful.

Or so Cove thought. Some early devices generated some power when exposed to heat. But changes to the plug composition caused the device to quit working when exposed to heat. However, sunlight through a violet glass did work and worked significantly better than before. Cove couldn’t explain why, but we can see that Cove had stumbled onto a metallic semiconductor, not unlike a modern Schottky junction. The plugs were zinc and antimony — something used in modern semiconductor processing — and were capped on one end with a nickel, copper, and zinc alloy and on the other end with copper.

The article goes on to point out that simple metal solar panels could be cheaper to produce and easier to recycle. Of course, you’d need to work on getting the efficiency way up to match modern cells.

There is one disclaimer. Apparently, Cove is relatively unknown and while he has a patent issued in 1906 the patent has some misleading information in it. Add to that he was supposedly kidnapped (the police thought it was a hoax) and he spent a year in jail for stock manipulation. We don’t know how much of Cove’s story is true or not — apparently [Decker] received research from a reader, but it all sounds plausible enough.

We keep hearing about alternate solar cell materials, but silicon is still the standard to beat. Most do-it-yourself panels start with a cell, but using this low-tech method could let you produce the whole thing.