Last week, the Texas Senate approved its latest redistricting plan for the 33 districts that could soon make up the state. In addition to adding two new districts to account for population growth, the plan drastically alters current districts in major metros like Dallas-Fort Worth, Houston, and Austin. In a piece published Friday, the Texas Tribune zeroed in on four proposed districts in the North Texas region that highlight the lengths the majority-Republican House will go to in order to remain power and bolster their numbers.

First up is TX-33, a district in the Dallas-Fort Worth area that was created in 2010 by a panel of federal judges who worked to preserve the voting rights of Black and brown voters, per the Voting Rights Act. The very provisions that brought TX-33 into existence are no longer in place, however. The Supreme Court struck down a section of the Voting Rights Act in 2013 that required federal preclearance in states and areas with a history of voter disenfranchisement towards marginalized groups.

Lawmakers in Texas for the first time are redistricting without federal oversight and appear to be using this opportunity to change the demographic makeup of the districts they may soon represent. The Texas Tribune notes that the plan to turn TX-33 whiter involves creating “;a bizarre finger northward into Dallas County,”; which you can see in this interactive map. 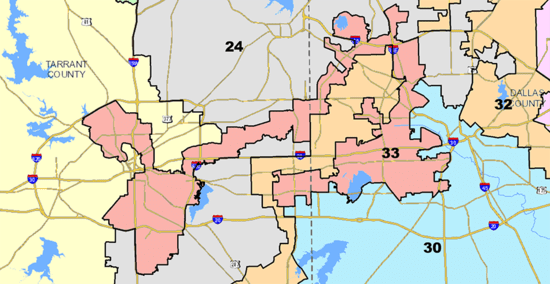 Hispanic voters especially would be impacted and pushed into a different district, TX-6, which has been expanded to include six additional majority-white counties stretching to the south and the east. According to the Texas Tribune, this change would amount to “;a hypothetical 20-point margin of victory for Trump.”;

Hispanic voters in Texas certainly contributed to Joe Biden’s victory in the 2020 presidential election, though the state ultimately went red. According to Austin ABC affiliate KVUE, Biden won the Hispanic vote in Texas by 19 points. Hispanic voters aren”;t the only demographic Texas Republicans have zeroed in on with their latest redistricting plan.

The Asian voting population, which is one of the fastest-growing groups in Texas, would also feel the negative impacts of the redistricting proposal. Collin County, where the Asian population has more than doubled over the past decade, would see many of its majority-Asian neighborhoods split apart into two districts: TX-3 and TX-4. The plan would decrease the number of Asian eligible voters from 10.8% to 5.6% in TX-3.

It would boost the population of Asian eligible voters in TX-4, but minimally compared with the more than 73% of white eligible voters that would encompass the planned district. Asian voters are a particularly strong voting bloc for Democrats. A 2020 presidential election exit poll conducted by NBC News found Joe Biden received an estimated 63% of the Asian American vote. Asian voters also helped turn Georgia blue in 2020 and voted in records numbers in the state.

Republicans”; redistricting plan treats the fact that minorities are at the center of Texas”; population growth as if the increase of people of color in the state is a threat. A prior proposal had the same problem and even got the attention of LULAC, which issued a rebuke against it.

“;The largest growth in Texas between 2010 and 2020 was Hispanics, who added to the population boom in the state. Yet, today”;s map all but assures that anyone except a Latino gets a new seat in Congress.”; LULAC President Domingo Garcia said in a statement.