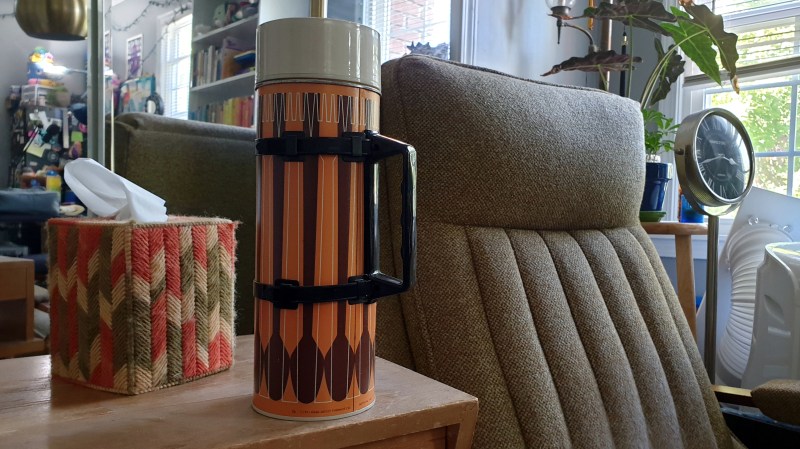 I recently started using a 50-year-old vacuum-seal flask that belonged to my Grandpa so that I don’t have to leave the dungeon as often to procure more caffeine. Besides looking totally awesome on my side desk, this thing still works like new, at least as far as I can tell — it’s older than I am. 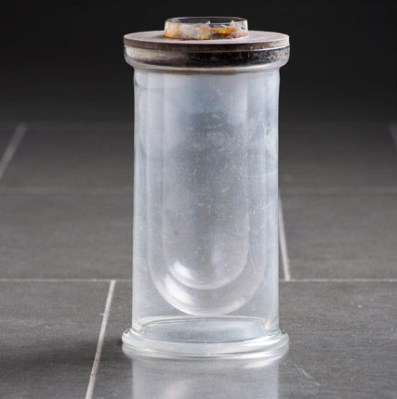 Of course this got me to wondering how exactly vacuum-seal flasks, better known in household circles as Thermoses work, and how they were invented. The vacuum-seal flask is surprisingly old technology. It was first invented by Scottish chemist Sir James Dewar and presented to the Royal Institute in 1892. Six years later, he would be the first person to liquefy hydrogen and is considered a founding father of cryogenics.

At the time, liquefying gases was an expensive process, and it was important to keep them in a fluid state as long as possible. Sir Dewar’s flask consisted of two flasks separated by a near-vacuum that does much of the job of heat retention. Heat cannot travel through a vacuum, so the contents stay at-temperature for much longer than they would outside the flask.

These vessels have a ton of uses other than keeping your coffee hot or your tea iced. They are widely used throughout the industrial, scientific, and medical fields for everything from preserving bodily fluids and tissue to measuring electric power, recording the weather, and detecting an airplane’s rate of climb. Vacuum-seal flasks are also used in MRI machines to keep the superconducting magnet cool. And they’re still used to keep liquefied gases liquid. 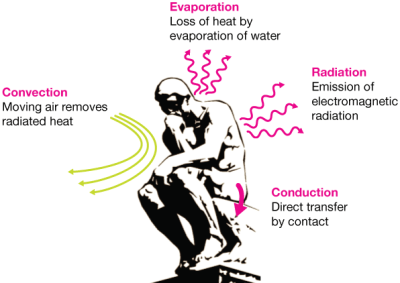 The four major methods of heat transfer. Image via Xaktly

Why are vacuum-seal flasks so effective at heat retention? That depends on how you look at it, as there are four major ways to describe heat loss — convection, conduction, radiation, and evaporation.

Starting from the top, that tight-fitting lid seals off the chamber and prevents heat transfer by both convection and evaporation. The near-vacuum between the inner and outer flasks helps to further prevent heat loss by convection.

The thin walls of the flask prevent heat conduction the same way you can put a single unfolded sheet of aluminum foil in the toaster oven, set it as high as you want, and pull it out bare-handed when your bratwurst bun is toasted. Thin walls have less mass, so they don’t conduct heat away from the liquid inside the vessel.

Back when the flasks were lined with glass, they had a silver coating that prevented heat lost by radiation. People got tired of replacing their Thermos every time they dropped it, so today’s flasks are much more likely to be lined with steel instead. 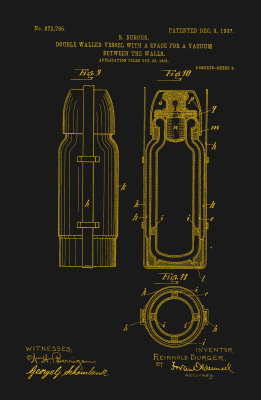 Burger and Aschenbrenner’s patent that became the Thermos. Image via US Patent #872795

Looking back from the 21st century, it’s easy to assume that both hot and cool applications were thought of at the same time, but that’s not the case. The vacuum-seal flask was not Sir James Dewar’s first foray into long-term temperature maintenance. Along with physicist and fellow countryman Peter Tait, he had developed a vacuum-insulated goblet to keep substances warm some twenty years earlier. Sir Dewar’s vacuum-seal flask intended for keeping liquefied gases cool had a much narrower neck than the hot goblet, and it was jacketed in a silver coating that prevented heat loss by radiation.

Sir Dewar was famously hot-headed. He’d had a falling out with Alfred Nobel over the patent for cordite, and never did patent his vacuum-seal flask. One of his glassblowers, Reinhold Burger along with another glassblower Albert Aschenbrenner discovered that the flask also kept baby milk warm for several hours, and realized its commercial potential. They patented the Thermos in 1904. Sir Dewar later lost his court case against the company. Although they recognized him as the inventor, he had not patented his invention, so they were within their rights.

Here’s a fun fact about thermodynamics, courtesy of our own [Adam Zeloof] — a beer on its side in the fridge will cool faster than the vertical can next to it. This is because horizontal cylinders have higher heat transfer than vertical cylinders as far as natural convection is concerned. That goes for any liquid in a sealed cylinder, not just the fizzy, alcoholic kind. So, remember that the next time the bodega only has warm cases of Pabst Blue Ribbon and bottles of Club Mate. Cool it down sideways, and then pour it into a vacuum-seal flask.