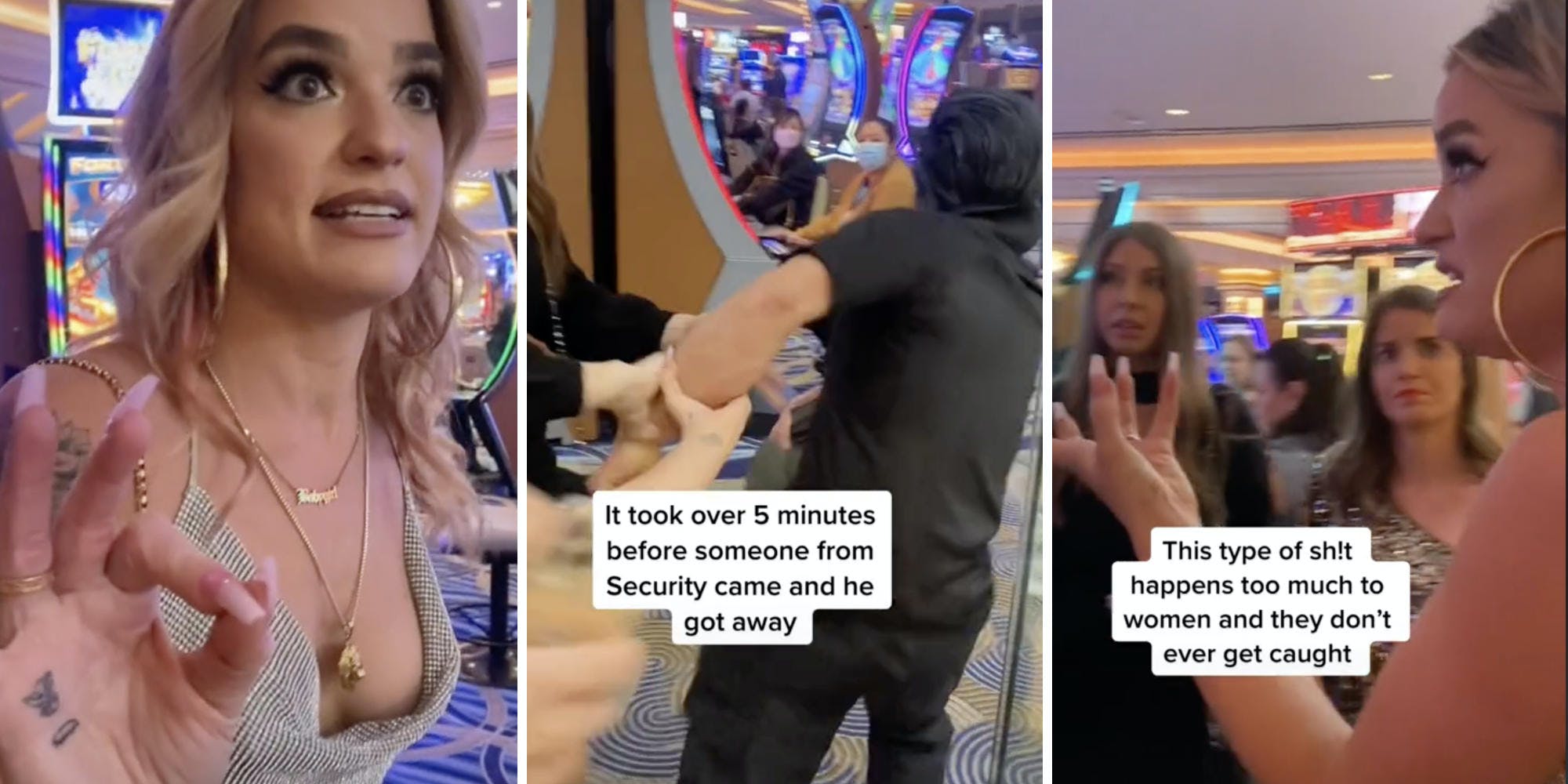 A woman says she was sexually assaulted at The Palazzo in The Venetian Resort in Las Vegas. She posted a video on TikTok confronting the alleged assailant and talking with security guards.

Twitch streamer and TikToker Ariel Lyndsey (@ariellyndsey) is seen telling the man who she said assaulted her to not touch her and to get away from her. She also slaps him in the face. The man then walks into the bathroom next to The Palazzo’s casino and Lyndsey and her friends are seen speaking with a man who works at the hotel.

“He put his hand up my fucking skirt and he literally grabbed me,” Lyndsey says in the TikTok. “This happened to me one time before in Santa Monica. I regretted so much not stopping and like doing something about it. I told myself if that ever happens again, I’m not gonna like just let it happen.”

Lyndsey’s video got over 1 million likes and has been watched over 7.5 million times.

The man then exits the bathroom and Lyndsey and her friends try to grab him so he can’t get away, but he quickly does. Lyndsey is then seen talking with a security guard, when another man tells her and her friends that the alleged perpetrator told him in the bathroom that Lyndsey was “crazy.”

“This is the kind of stuff that women have to deal with,” Lyndsey’s friend says to the camera. “Men are disgusting. It doesn’t matter how you’re dressed, you don’t get to grab a woman. This happens all the time.”

Lyndsey posted multiple follow-up TikTok videos explaining what happened after her viral video ended. She showed a copy of the police report she filed against the man and said that the man was detained, questioned, and then let go.

“I encourage women to like, if there’s something going on, like this? Like, document, get a video of him or whoever,” Lyndsey said in a second follow-up video after saying that her friend who recorded the incident was a “godsend” for doing so.

The TikToker also said that the incident occurred while she was on a work trip and that her stay at The Palazzo was sponsored. She also said that it took security “five minutes” to show up on the scene and that she and her friends had to be “so aggressive” about making sure there were consequences for the man that Lyndsey says sexually assaulted her. Even so, the TikToker said it took “three days” to get police on the phone with her about the situation.

Lyndsey also said she reported the incident to “corporate,” and that The Palazzo’s security cameras caught the incident. The Daily Dot has reached out to The Palazzo via email.

“This would not have gotten dealt with if I wasn’t fuckin’ loud and aggressive about it,” she says in a follow-up video.

Commenters on all of Lyndsey’s TikToks said that they had had similar experiences.

“As a woman who lives in Vegas, I can attest that this happens all the time with so many of my friends,” @lyndseyluxford wrote.

“This stuff happened to me a few times when I’m at the club and I tell the bartenders and they didn’t believe me,” @mekaelafarris commented.

“My rear was grabbed middle of day in target and cop smirked. Didn’t care at all. I hope you get to fully press charges on this guy,” @equuswhisper wrote.

The Daily Dot has reached out to Lyndsey via email.

The post ‘This is the kind of stuff that women have to deal with’: Woman says man sexually assaulted her at a casino in viral TikTok appeared first on The Daily Dot.