WARSAW, Poland –; Efforts by world leaders to head off a Russian invasion of Ukraine were dealt a serious blow Monday when Russian President Vladimir Putin signed decrees recognizing the independence of two separatist regions in eastern Ukraine and ordered his military to “;maintain peace”; there.

But Putin’s moves, made as shelling continued in those regions, could be a precursor to the Kremlin sending in troops and weapons to support the separatists. Doing so is sure to deepen already inflamed tensions between Russia and the West.

The U.N. Security Council set a rare nighttime emergency meeting at the request of Ukraine, the U.S. and other countries. Ukraine”;s president, Volodymyr Zelenskyy, sought to project calm, telling the country: “;We are not afraid of anyone or anything. We don”;t owe anyone anything. And we won”;t give anything to anyone.”;
[time-brightcove not-tgx=”true”]

Read More: The Untold Story of the Ukraine Crisis

The White House said earlier Monday that President Joe Biden had agreed “;in principle”; to meeting Putin, but only if the Kremlin refrains from launching an assault on Ukraine. Even before any invasion, however, both Biden and the European Union said they would move ahead with targeted sanctions in response to Putin’s decrees.

The White House issued an executive order to prohibit Americans from investing and doing business in the separatist regions.

A Biden-Putin meeting would offer some new hope of averting a Russian invasion that U.S. officials said appeared imminent, as an estimated 150,000 Russian troops await Putin’s orders to strike. It was uncertain when –; or if –; troops massing at the border would enter Ukraine.

Here is a look at the latest developments in the security crisis in Eastern Europe: 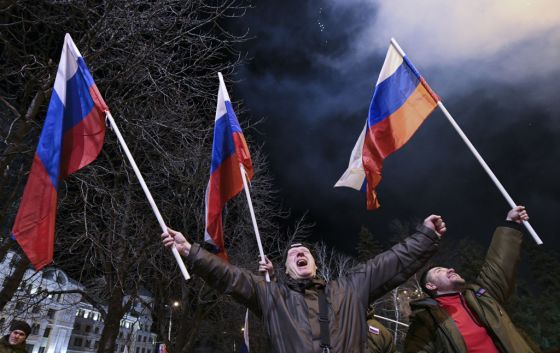 In a long, ranting speech during a meeting of his Security Council, Putin charged that Ukraine had inherited Russia”;s historic lands and after the Soviet collapse was used by the West to contain Russia.

Putin’s decree allows Russia to sign treaties with the separatist regions and openly send troops and weapons there. It says Russia will offer mutual assistance when requested by rebel leaders to “;maintain peace.”

Western officials fear that Russia could invade Ukraine any moment, using skirmishes in eastern Ukraine as a pretext for an attack.

The decision effectively shatters the 2015 Minsk peace agreements, which ended large-scale fighting. Violence has still simmered and seen a spike in recent weeks in the wider crisis.

The meeting of Putin”;s Security Council followed televised statements by separatist leaders, who pleaded with Putin to recognize their regions as independent states and sign friendship treaties envisaging military aid to protect them from what they described as an ongoing Ukrainian military offensive. Russia”;s lower house made the same plea last week.

Ukrainian authorities deny launching an offensive and accuse Russia of provocation as shelling intensifies along the line of contact. 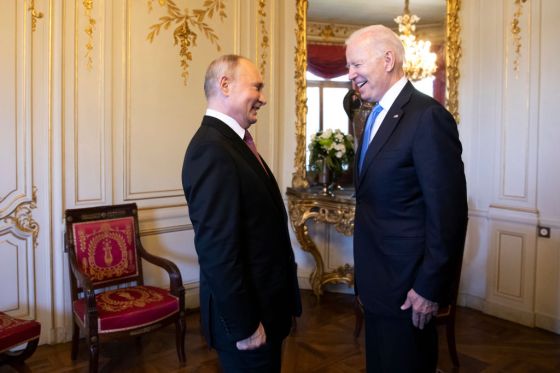 The U.S. and Russian presidents have tentatively agreed to meet in a last-ditch diplomatic effort to stave off another invasion of Ukraine. Russia seized Crimea from Ukraine in 2014.

Yet both seem cautious about a possible meeting.

The White House says the meeting will only happen if Russia does not invade Ukraine.

Kremlin spokesman Dmitry Peskov, for his part, said “;it”;s premature to talk about specific plans for a summit.”;

Read More: How Biden Has Tried to Throw Putin Off Balance In Ukraine

French President Emmanuel Macron sought to broker the possible meeting between Biden and Putin in a series of phone calls that dragged deep into Sunday night. Macron”;s office said both leaders had “;accepted the principle of such a summit,”; to be followed by a broader meeting involving other leaders, too.

The White House said Biden on Monday conferred with Macron and German Chancellor Olaf Scholz during a 30-minute call.

U.S. Secretary of State Antony Blinken and Russian Foreign Minister Sergey Lavrov were to lay the groundwork for the summit at a meeting Thursday, according to Macron’s office. 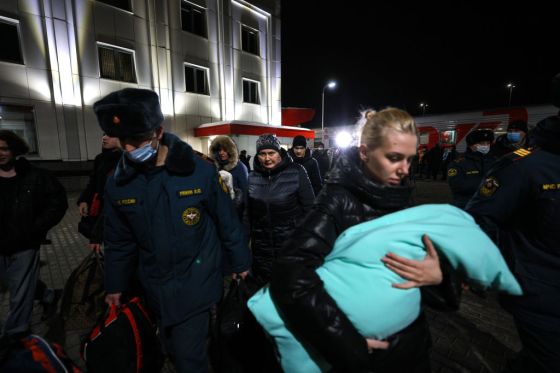 Heavy shelling has increased in recent days along the tense line of contact between Ukrainian forces and the Russian-backed separatist rebels in Ukraine”;s industrial heartland of Donbas.

The conflict began after Russia’s annexation of Crimea and has claimed at least 14,000 lives.

In the village of Novognativka on the government-controlled side, 60-year-old Ekaterina Evseeva said the shelling was worse than at the height of fighting.

Russian troops who have been carrying out military exercises in Belarus, which is located on Ukraine’s northern border, were supposed to go home when those war games ended Sunday. But now Moscow and Minsk say that the Russian troops are staying indefinitely.

The continued deployment of the Russian forces in Belarus raised concerns that Russia could send those troops to sweep down on the Ukrainian capital, Kyiv, a city of 3 million less than a three-hour drive rom the Belarusian border.

Despite Biden”;s assertion that Putin has made the decision to roll Russian forces into Ukraine, Ukrainian officials sought to project calm, saying they weren’t seeing an invasion as imminent.

Defense Minister Oleksii Reznikov said Monday that Russia has amassed 147,000 troops around Ukraine, including 9,000 in Belarus, arguing that the number is insufficient for an offensive on the Ukrainian capital.

Read More: The Threat of a Russian Invasion Is Crushing Ukraine’s Economy and Culture

“;The talk about an attack on Kyiv from the Belarusian side sounds ridiculous,”; he said, charging that Russia is using the troops there to create fear.

Over the weekend at the Polish border, many Ukrainians were also returning home from shopping or working in the neighboring EU country. Some said they were not afraid and vowed to take up arms against Russia in case of an assault. 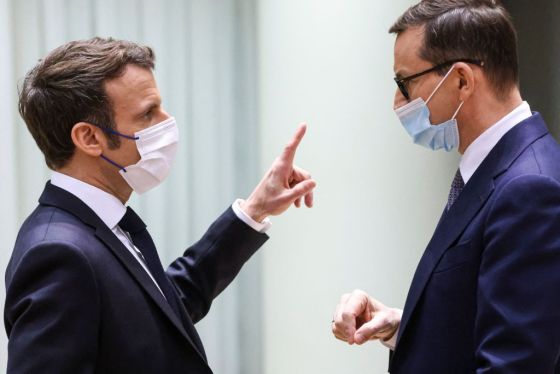 YVES HERMAN/POOL/AFP via Getty Images French President Emmanuel Macron (L) and Polish Prime Minister Mateusz Morawiecki speak as they take part in a European Union extraordinary summit to discuss the crisis between Russia and the West over Ukraine, in Brussels on February 17, 2022.
What is the E.U. doing about Ukraine?

For all the posturing and vows of reprisal from Western leaders, direct military intervention has thus far been ruled out.

However, Ukrainian Foreign Minister Dmytro Kuleba said Monday the European Union has agreed to set up a military education advisory mission in his country.

Kuleba told reporters in Brussels after meeting with the bloc’s foreign ministers that an agreement had been reached in principle to roll out the advisory training military mission.

“;This is not combat forces,” he said. “;This is a new element in the cooperation between Ukraine and the European Union.”;

Read More: What Happens Next in Ukraine Could Change Europe Forever

The move could involve sending European officers to Ukraine”;s military schools to help educate its armed forces. It”;s likely to take several months to set up.

Russia has sought promises from NATO that it would never offer membership to Ukraine and other former Soviet republics, a condition that the West has rejected.

The chairman of the U.S. Joint Chiefs of Staff, Gen. Mark A. Milley, spoke Monday with the commander in chief of the Ukrainian armed forces, Lt. Gen. Valery Zaluzhny.

Milley called Ukraine a key partner to NATO, according to the Pentagon’s summary of the phone call.

British Prime Minister Boris Johnson said he was preparing to speak to Zelenskyy and “offer him the support of the United Kingdom.”;

Earlier, Britain”;s defense secretary, Ben Wallace, urged Putin to turn away from military action and pursue diplomacy not just for the sake of Ukrainians but to prevent Russian deaths.

Russians know the consequences of the past actions, including the invasion of Afghanistan and Russia”;s invasion of Chechnya, he said.

“;These are just two examples when too many young men returned home in zinc-lined coffins, and the government therefore urges President Putin for the sake of his own people, and even at this 11th hour, to rule out the invasion of Ukraine,” he said.

Wallace told the House of Commons that Putin had continued to build up forces in the region. Russia has now massed 65% of its land combat power on the Ukrainian border, he said.

U.K. Foreign Secretary Liz Truss said the West was preparing “;for the worst-case scenario,”; adding: “;We must make the cost for Russia intolerably high.”;