The House Oversight Committee recently launched an investigation into the giant consulting firm McKinsey, and its role in inflating drug prices as well as pushing opioids at every opportunity.

“Over the last decade, McKinsey & Company—one of the largest consulting companies in the world and a major U.S. government contractor—has engaged in a pattern of conduct that raises serious concerns about its business practices, conflicts of interest, and management standards,” wrote Chairwoman Maloney. “The company’s support for drug companies pushing addictive opioid painkillers and raising prices for life-saving medications, even as McKinsey also advised the federal agency regulating their conduct, may have had a significant negative impact on Americans’ health. McKinsey’s investments through an internal hedge fund—including in companies benefiting from opioid sales—also raise significant concerns about conflicts of interest.”

The opioid stuff is certainly scary, but more interesting to us at Techdirt is that the Committee also released a set of incredibly damning documents, of PowerPoint slides from McKinsey, presented to AbbVie execs about ways to jack up the prices on drugs, especially by bending over backwards to re-patent the same drug over and over again. Going through the slides is an exercise in observing pure evil. For all the talk of internet companies “putting profit over societal benefit” or whatever, these documents show deliberate planning by McKinsey to make sure that AbbVie drugs more or less bankrupt those who take them — often by blatantly abusing the patent system.

Some of the slides go back about a decade, at a time when the entire pharmaceutical industry was freaking out over its own failures to discover new and useful drugs that it could get monopoly rents over. Rather than building a nice sustainable business with nice sustainable margins, the pharma industry, over the last few decades, has focused on squeezing ridiculous monopoly rents out of the public by abusing patent laws. And, of course, you’ll hear that they need to do this to pay for all the research and development, and all the costs of trials and whatnot. Except nearly all those claims are bullshit.

Stories abound about the billions of dollars that it costs to develop a new drug — except studies have shown those numbers are massively inflated (a drug that the pharma firm claimed cost $1.3 billion to develop actually cost the firm only $55 million). Much of the actual costs (and research and work) are done by universities or through public funding from NIH and NSF. But all of the profits go to the big pharma companies.

But what McKinsey and AbbVie did with Humira is truly nefarious. As the presentations show, AbbVie (and its predecessor, Abbott) was terrified of facing any competition for Humira, a biologic drug that is used by many to treat arthritis, Crohn’s disease, and other diseases. Apparently it costs around $84,000 a year, though that link claims that if you’re lucky, perhaps insurance will lower that cost to just $60k. That same page claims the reason it costs so much is:

One of the reasons that Humira is so expensive is because it’s a complex medication to make. DNA technology must be used to create proteins for the drug—a process that can’t be replicated, unlike with synthetically manufactured medications.

Except, these internal documents from McKinsey tell a very, very, very different story. McKinsey and Abbott knew that other competitors entering the market would cut the price of Humira significantly: 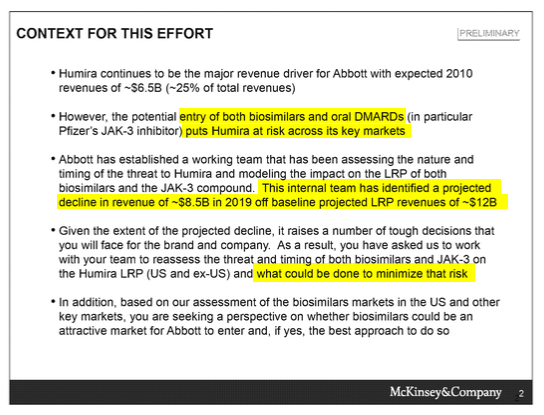 The project was pitched as a way to assess this competitive threat and to look for ways to limit it, but throughout the report you see winks and nods towards abusing patent law to stop the competition, as well as pretending that biosimilar competition was somehow unsafe: 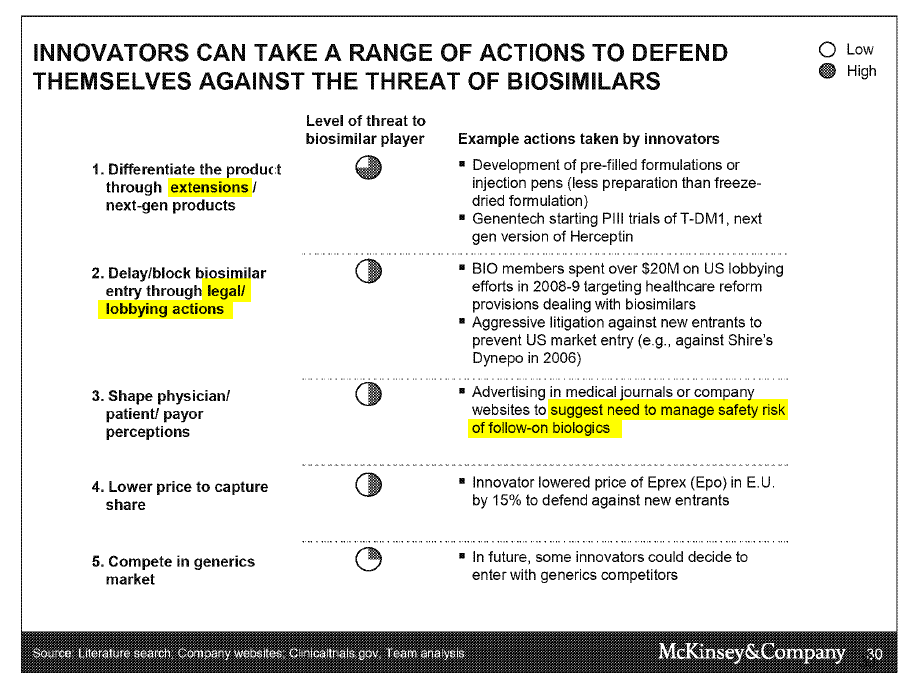 Note that the two items that actually might benefit the public: lowering prices and competing… are at the bottom of the list.

But what McKinsey really seems to love is this idea of “formulation change” to both extend the effective patent life of a drug… and to boost the cost, claiming that these “innovations” allow them to jack up the cost: 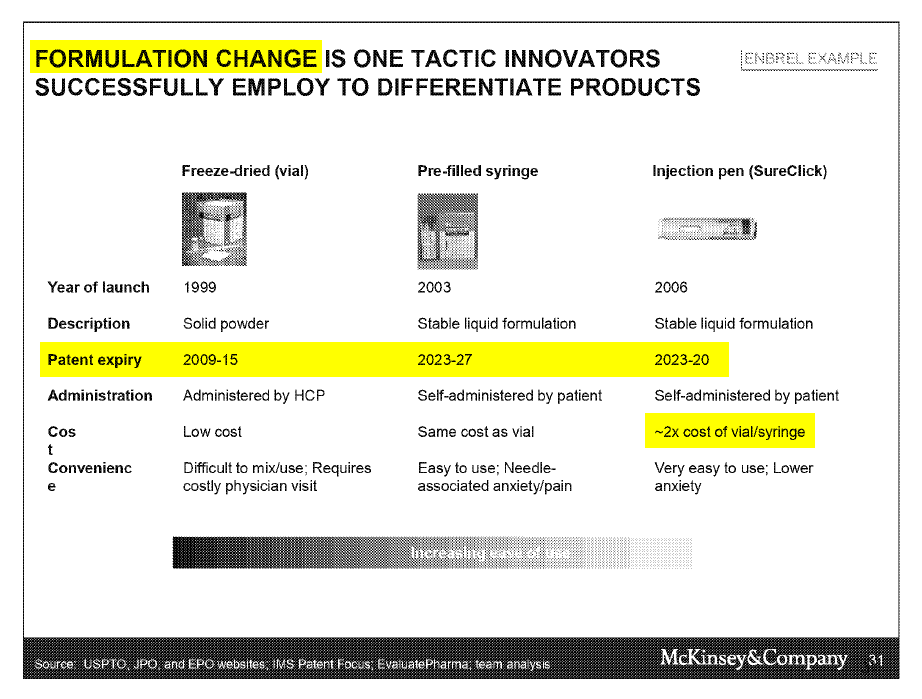 And, if you think maybe that doesn’t matter because the earlier version will go off patent, the way the scam works is that you get the pharma company to phase out entirely the older formulation a few years before the patent runs out, forcing patients to move onto the newer formulation. Thus, when the patent runs out on the earlier version, Pharma tells everyone that it would be a “step backwards” to go with a generic or biosimilar of the “earlier” formulation.

From there, the slides shift to a year later, when McKinsey is really all in on trying to find ways to reformulate Humira and extend the patent life (and the ability of Abbott to jack up prices). The slides make little attempt to hide the fact that this is all about protecting Abbott’s profits, not making anyone’s lives better. The presentation shows that McKinsey set up an internal incentive program to try to get various Abbott scientists to suggest any kind of ideas for how to patent new formulations of Humira to extend the patents covering it: 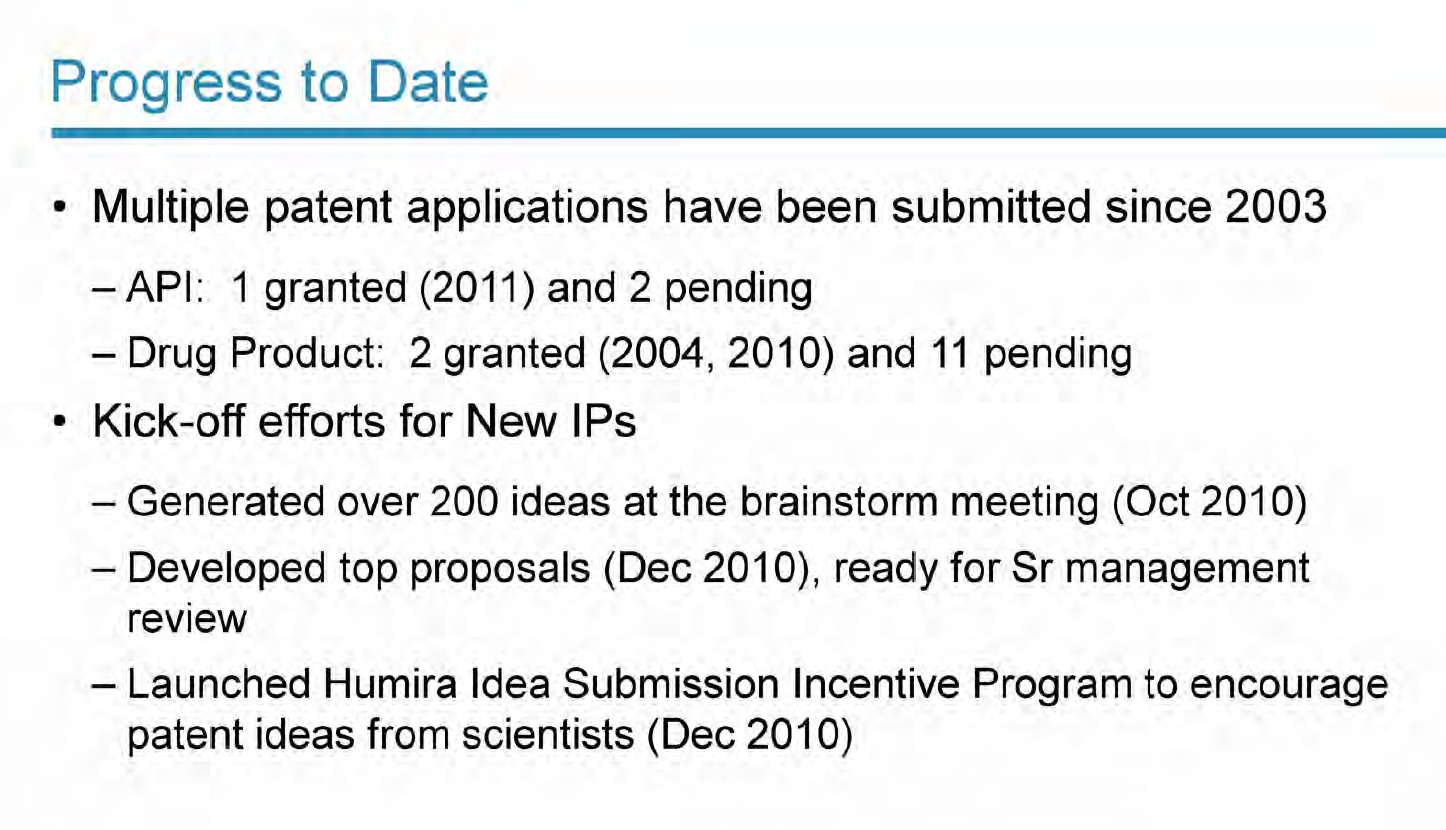 They don’t even hide the fact that this is entirely an effort to “broaden our Humira patent estate in response to Biosimilars.” It’s got nothing to do with improving things for customers. It’s about keeping drug prices high way beyond the expiration of the original Humira patents. 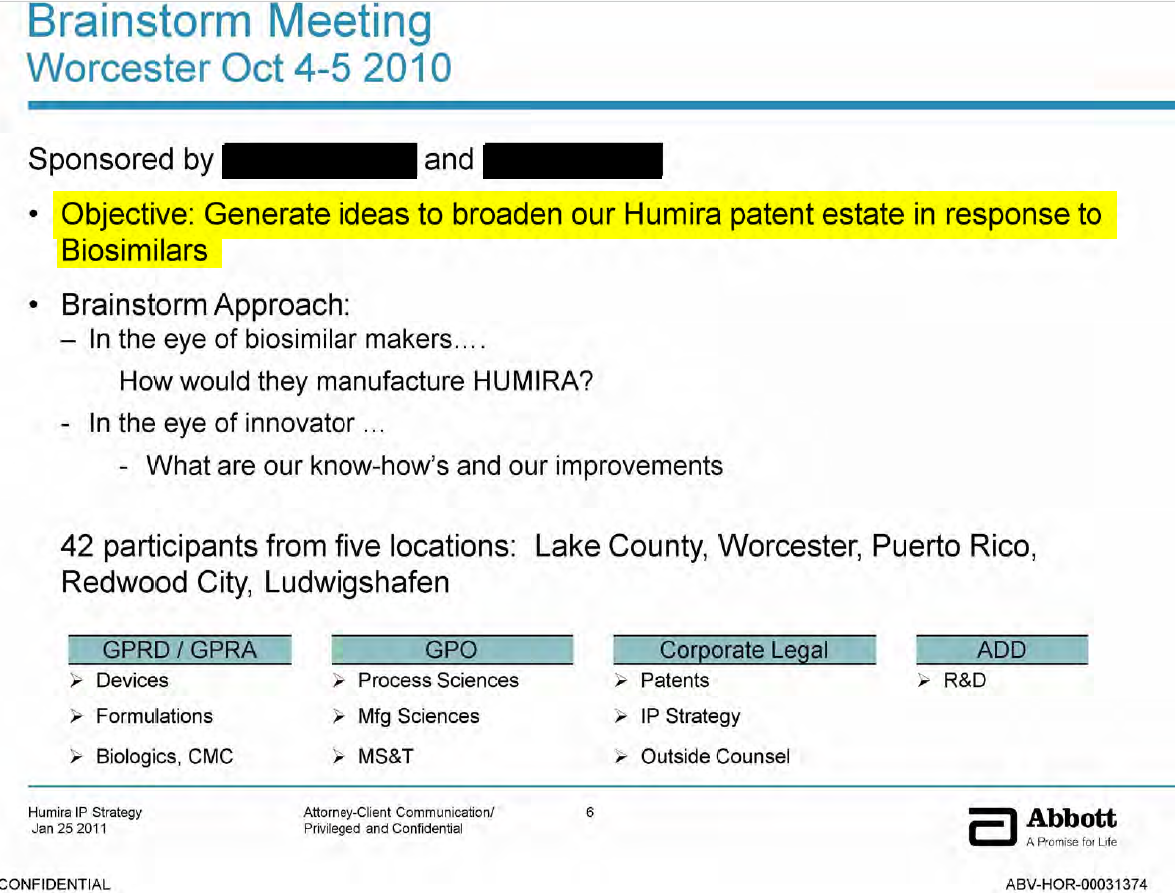 And what do Abbott/AbbVie scientists get for selling their soul and deliberately keeping prices of life-saving drugs way too high for most people? Apple devices. This is why they pay McKinsey the big bucks. They set up a program in which Abbott scientists would get an iPhone if they had an idea on how to extend Humira’s patents, an iPad if those ideas turned into an actual patent applications, and (yup) you’d get a Mac computer if the patent was actually granted: 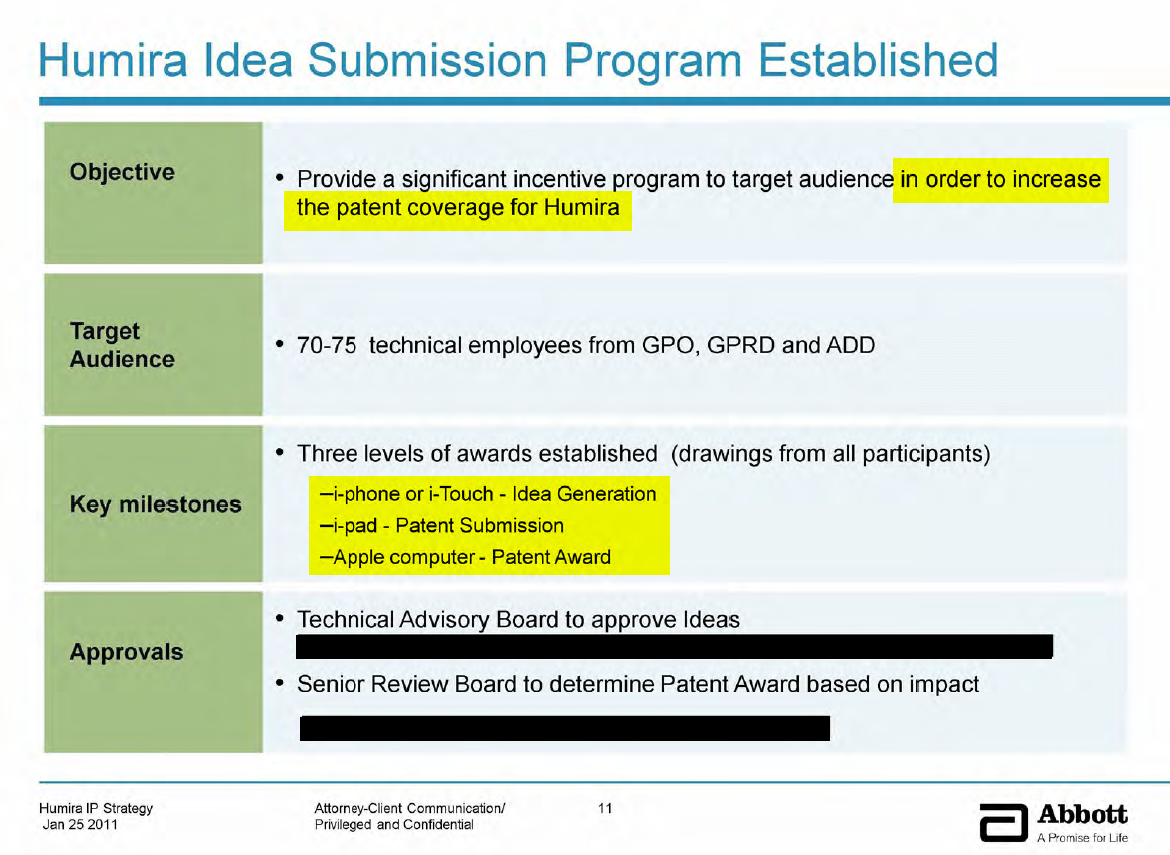 There’s much more in the presentation, and Tahir Amin from I-MAK Global has an even more in-depth Twitter thread about this nonsense.

And… in an interesting bit of timing… just a week or so after the House Oversight Committee released these incredibly eye-opening documents, the Institute for Clinical and Economic Review released a big report detailing how recent US drug price increases are not supported by new clinical evidence. And guess which drug tops their list of the drug price changes having (by an order of magnitude) the most impact on how much people had to spend? Humira.

The report shows that because of unsubstantiated price increases on Humira, Americans spent an unnecessary extra $1.4 billion on Humira, thanks to a 10% increase in net price on a drug that a decade ago everyone (including Abbott and McKinsey) knew was facing the expiration of its patents, as well as expected competition from biosimilars.

As ICER noted in its release, in other countries, where Humira is actually facing biosimilar competition, prices are falling:

“While prescription drugs continue to arrive in the US with increasingly high launch prices — often not aligned with those therapies’ ability to improve patients’ lives — year-over-year price increases have slowed considerably since ICER began issuing these UPI reports,” said David Rind, MD, ICER’s Chief Medical Officer. “However, there remain many high-cost brand drugs that continue to experience annual price hikes, even after accounting for their rebates. The most extreme of these is Humira, with an ever-escalating US price that contrasts starkly to its falling price in every country where Humira currently faces biosimilar competition. Even more concerning, several of these treatments have been on the market for many years, with scant evidence that they are any more effective than we understood them to be years ago when they cost far less.”

To McKinsey consultants and AbbVie scientists: were those iPhones worth it?